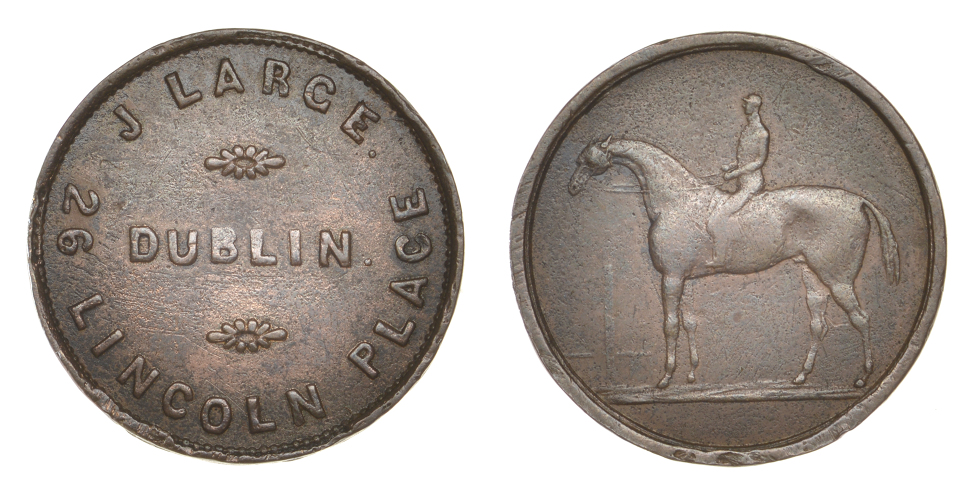 Formed by the late
David Ward (1943-2021), who lived in Bulford (on Salisbury Plain), the collection was sold in 136 lots. Mr Ward, an accountant by profession, started collecting the numismatica of his home county in 1968 and proceeded, over the ensuing 52 years, to amass an important group.

The collection covered towns and cities in Wiltshire such as Salisbury, Wilton, Bradford-upon-Avon; Chippenham; Devizes; Calne; Highworth; Amesbury; Trowbridge; Malmesbury; Marlborough and Swindon but also iconic landmarks. The collection was 100% sold and the highest price was paid for a very rare medal dating from 1796 showing Stonehenge and the ancient druids which fetched £1,860 against an estimate of £500-700 and was bought by a buyer in the USA [lot 112].

Some of the strongest prices of the sale were for the Irish tokens from the Collection of Barry Woodside, which had had a pre-sale estimate of £7,000 for the Collection of 63 lots, however it achieved a total of £27,361 and was 100% sold. The highest price being for a copper token from Dublin showing a Horse & Jockey and stamped James Large which realised £1,860 against an estimate of £40-60 and was bought by a private collector in the Irish Republic. James Large is believed to have been the inn holder of the Horse & Jockey, 26 Lincoln Place in 1855 [lot 495]

95 lots from the Collection of Seattle-born and bred, Bill McKivor, who was a very well-known figure in the world of tokens on both sides of the Atlantic, sold for £34,249 and were again 100% sold. The collection had been expected to fetch in the region of £18,500, and the highest prices was paid for an exceptionally rare trial copper halfpenny from Coalbrook Dale, Shropshire, dating from 1792 with a view of the Iron Bridge, which realised £2,976 against an estimate of £1,000-1,500 [lot 282], and an unusual Halfpenny dating from 1794, stamped with Daniel Eccleston of Lancaster on one side and an image from the Copper Co of Upper Canada on the other which sold for £2,976 as well – both were bought by UK collectors [lot 269].

The third and final part of the Robert Thompson Collection of 17th century tokens, comprised 117 lots which fetched a total of £26,958 and again was 100% sold. The main focus was on London and include a rare octagonal Halfpenny of St George’s Church in Southwark (London) selling for £1,612. It was bought by London-based private collector and had been estimated at £300-400 [lot 250].

From the Collection of the 19th Century Tokens formed by John Akins (Part II) which comprised 107 lots the highest price was for a very rare Five Shilling coin from Chichester (West Sussex), dating from 1811 which sold to a Sussex-based private collector for £1,488 [lot 422]. The Collection sold for £21,427, with just four lots unsold.

***PLEASE NOTE THAT ALL PRICES INCLUDE 24% BUYERS’ PREMIUM***


NOTES TO EDITORS:
Dix Noonan Webb – a brief history
In 1991, its first year of trading, the company held three medal auctions and sold 1,200 lots for a total hammer price of £553,000, however 30 years later, DNW is established as the premier medal auctioneer worldwide. Two years later, in 1993, it opened a coin department which also auctions commemorative medals and tokens. In 2015 DNW added jewellery to its sales calendar as well as setting up a stand alone banknotes department and expanding into premises next door. In 2020 DNW achieved a total hammer price of £14,256,060 and the total number of lots sold across all departments was 24,400. To date the company has sold in excess of 350,000 lots totalling over £200 million.
For further press information and images please contact:
Rachel Aked - Tel: 07790732448/ Email: Rachel@rachelaked.co.uk
October 2021