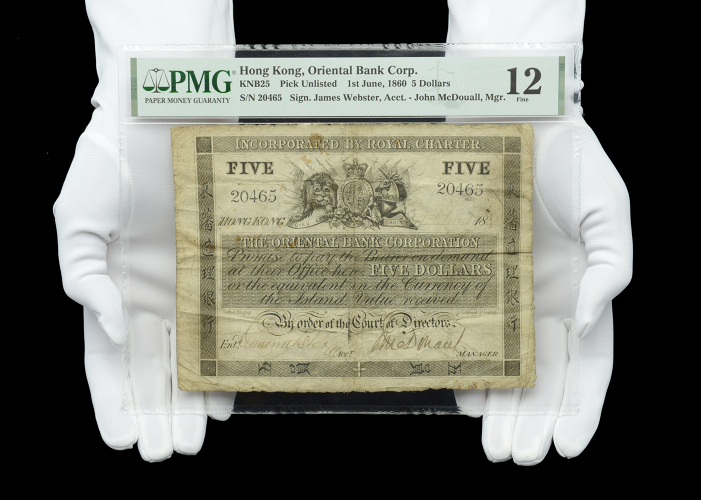 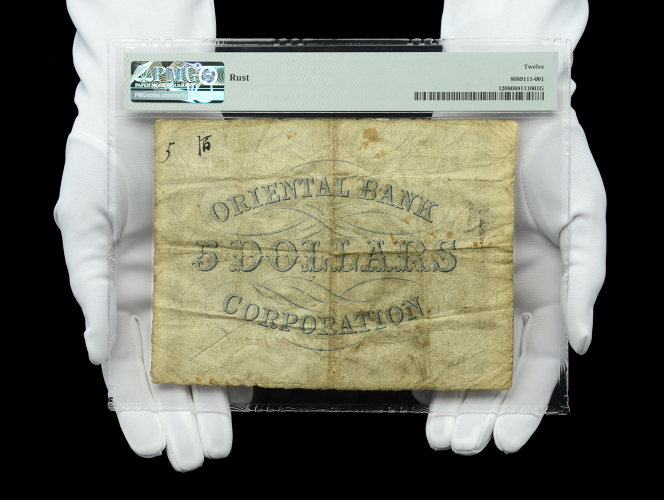 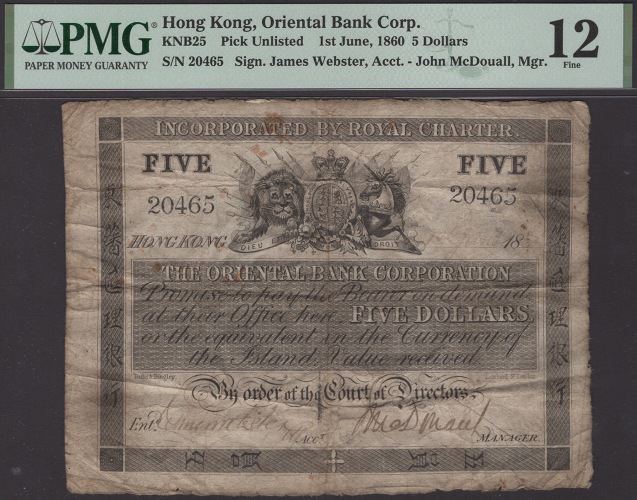 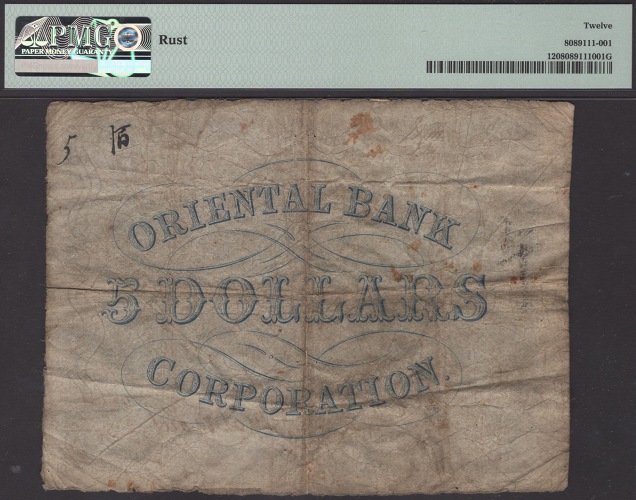 A remarkable and recently discovered ‘Hong Kong 1860’ Five Dollar Banknote - the earliest known fully issued banknote of any denomination for Hong Kong – sold for £161,200 (including buyers’ premium) at Dix Noonan Webb in their auction of British, Irish and World Banknotes today (Thursday, August 26, 2021) at their Mayfair saleroom (16 Bolton Street, London W1J 8BQ). It was estimated to fetch £30,000-50,000.

The consignor was unsure how it arrived in the UK, but it is believed that it came back to the UK in the late 1800s, probably with a British person working or travelling in the Far East, and lay undiscovered for over 150 years.

Bought by a collector in Hong Kong, the note was issued by the Oriental Bank Corporation - the first bank to open a branch in Hong Kong - the note is dated 1 June 1860, and has the serial number 20465. It bears the signature of the Manager, John McDouall, at right and the Accountant, James Webster, at left, with a Royal Coat of Arms at upper centre. The only other issued notes from the Oriental Bank Corporation to have survived are dated 1866 and 1879, three of which are in private collections, and several others in institutions.  It is interesting to note that throughout its history, the Bank had its head office in London and a sizeable branch in Edinburgh.  The majority of its Court of Directors were Scottish, along with a great many of its senior overseas staff.


As Andrew Pattison, Head of Banknote Department at Dix Noonan Webb, commented: “We are delighted with the superb result achieved for this incredibly important banknote.  This is the highest price ever achieved at auction for a Hong Kong banknote and the fact that it is returning to its country of origin is particularly gratifying.  One can only imagine what John McDouall and James Webster, the two men who signed the note in 1860, would make of this!”

The managers signature on the lower right of the note is that of a Scotsman, John McDouall. McDouall was born in Stranraer, Dumfries and Galloway, on the 7th February 1831. When Hong Kong was officially founded in 1841 he was only ten years old, but in 1851, by the age of 20, John McDouall had made his way to the territory and started work at the newly chartered Oriental Bank Corporation. John must have been bright, and a hard worker, because by the time this banknote was issued in 1860, he was managing the Hong Kong branch of the bank. At the time of his death, at the age of just 53, he had risen to the position of manager of the entire Oriental Bank Corporation, at the time the wealthiest and most successful bank in the region. He married an American of good family, Adeline Huttleston, in 1867 and had two children, Mary and John. Tragically, McDouall was killed in a carriage accident in 1873. He was buried in Hong Kong cemetery and his grave can still be found there alongside that of his daughter Mary, who died at the age of only two months.

The signature on the left was of James Webster of Crail, Fife. He was born in 1833, a little after John McDouall, and began his banking career in Crail itself, as a clerk. By 1859 he had taken a position as an assistant accountant at the Oriental Bank Corporation in Hong Kong, at almost the same time McDouall became manager. Webster had left the bank by 1865 and returned to his home town, although he continued to work all over the world in banking, shipping and commerce. At various times he appears to have lived and worked in Nevada (United States), Yokohama (Japan), South America and Egypt. During later life he was a significant figure in Crail, entering many agricultural shows and painting positions on the board of many local establishments. He married twice but had no children, and died in 1913 in Burntisland, close to his place of birth in Fife.

The Oriental Bank was an evolution of an earlier institution, the Bank of Western India, which was founded in 1842.  It expanded quickly, opening branches all over India and South-east Asia, and was renamed The Oriental Bank.  Following the acquisition of the Bank of Ceylon in 1850, the bank was granted a Royal Charter and was renamed the Oriental Bank Corporation in 1851.  By the mid 1850s the bank had over 20 branches, with some as far afield as New Zealand, California, and Mauritius, most of which were issuing banknotes.

The Oriental Bank was the first bank to open a branch in Hong Kong.  It was the only bank to issue notes there until 1858, when the Mercantile Bank of India, London & China opened its doors.  This was rapidly followed by several other banks in the mid 1860s but by this time the Oriental Bank Corporation was the pre-eminent exchange bank, and banknote issuer in the region, with a paid-up capital of over £1,500,000. Following several financial disasters in the 1870s, the bank ceased trading in 1884.  Although it was reformed as the New Oriental Bank Corporation, this too failed, and the bank finally closed its doors in 1892.

Starting in 1846, the Oriental Bank was the first bank to issue notes in Hong Kong, although no examples are thought to have survived.  This note, dated 1860, is of a type that was issued between 1851 and 1865.  Interestingly, it was issued in the same year that Kowloon was officially ceded to the British at the Convention of Peking, following the Second Opium War.

Batho & Bingley also printed notes for the Oriental Bank in Singapore, Ceylon, Australia, India and probably their other branches as well. As the bank gradually ran out of Batho & Bingley notes in each of these branches, all new printing contracts were instead awarded to Perkins Bacon.  It is also interesting to note that a Batho & Bingley design for a Glasgow Bank note, produced in the mid 1840s, is almost identical to this note in all respects.  This is another Scottish connection, and may explain why such an obscure printing company was chosen to provide notes for a major overseas bank.
***Price includes 24% buyers’ premium***
FORTHCOMING SALES AT DNW
TUESDAY & WEDNESDAY, SEPTEMBER 7 & 8 – COINS AND HISTORICAL MEDALS
TUESDAY, SEPTEMBER 14 - JEWELLERY, WATCHES & OBJECTS OF VERTU
WEDNESDAY, SEPTEMBER 15 - ORDERS, DECORATIONS, MEDALS AND MILITARIA
WEDNESDAY, SEPTEMBER 22 - THE MICHAEL GIETZELT COLLECTION OF COINS OF CHARLES I AND THE COMMONWEALTH (1625-1660)
THURSDAY, SEPTEMBER 30 – WILTSHIRE COINS & PARANUMISMATICA, BRITISH TOKENS, TICKETS & PASSES

Free online bidding is available is www.dnw.co.uk
For more information, please call 020 7016 1700
DNW are on Social Media
Instagram @dixnoonanwebb
Facebook: dixnoonanwebb
Twitter @dixnoonanwebb
NOTES TO EDITORS:
Dix Noonan Webb – a brief history - In 1991, its first year of trading, the company held three medal auctions and sold 1,200 lots for a total hammer price of £553,000, however 30 years later, DNW is established as the premier medal auctioneer worldwide. Two years later, in 1993, it opened a coin department which also auctions commemorative medals and tokens. In 2015 DNW added jewellery to its sales calendar as well as setting up a stand alone banknotes department and expanding into premises next door. In 2020 DNW achieved a total hammer price of £14,256,060 and the total number of lots sold across all departments was 24,400. To date the company has sold in excess of 350,000 lots totalling over £200 million.