DIX NOONAN WEBB TO SELL IMPORTANT GOLD PENNY OF ECGBERHT, KING OF THE WEST SAXONS DISCOVERED IN WILTSHIRE - The only late Anglo-Saxon gold coin known to be in private hands - 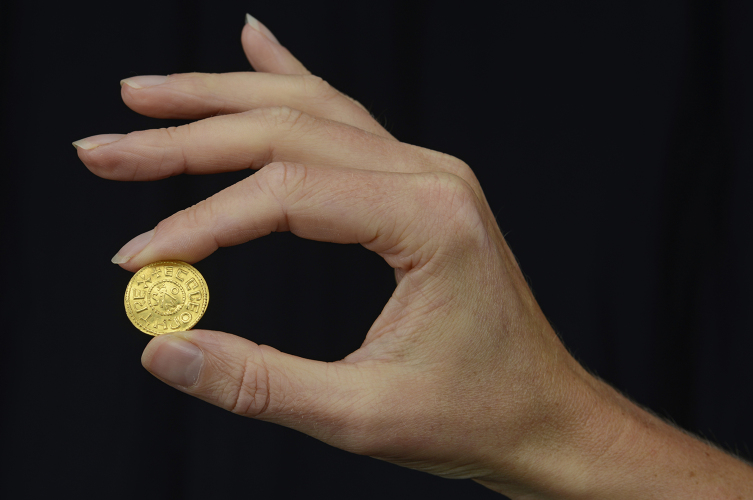 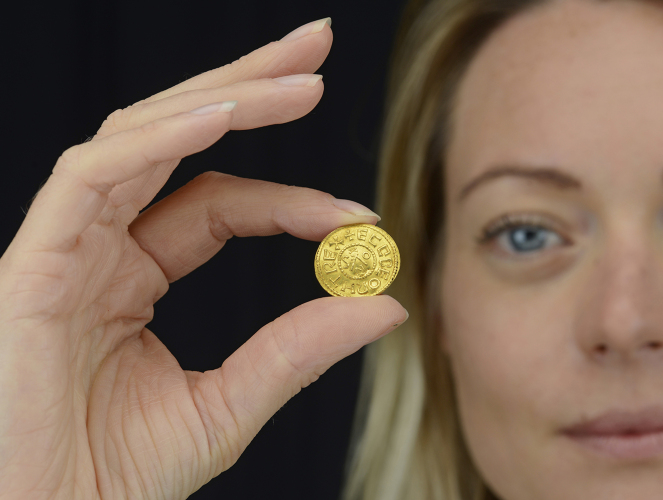 A highly important gold Penny of Ecgberht, King of the West Saxons (802-839) is expected to fetch £150,000-200,000 when it is offered in a sale of Coins and Historical Medals on Tuesday, September 7 & Wednesday, September 8, 2021 at international coins, medals, banknotes and jewellery specialists Dix Noonan Webb. This is the only late Anglo-Saxon gold coin in private hands; the other eight specimens are in institutions (the British Museum having seven and another being in Lausanne).

The Gold Penny, or Mancus of 30 Pence, was discovered by a metal detectorist at West Dean, on the Wiltshire/Hampshire border, in March 2020, and is unique. It was struck at a West Saxon mint, possibly Southampton or Winchester, and bears the King’s title, ECGBEORHT REX, around a monogram of the word SAXON.

As Peter Preston-Morley, Head of Coin Department at Dix Noonan Webb, commented: “Full XRF and SEM analysis of this coin was performed in June 2021. The results show the use of high-purity gold, with only 2.8% silver and 0.6% copper at detectable levels. This composition is consistent with that of natural gold which has been neither refined nor artificially alloyed. Perhaps of more significance, the composition of the Ecgberht mancus falls within the same range as other medieval coins reported by Dr Gareth Williams and Dr Michael Cowell in 2009 (’Analysis of a gold mancus of Coenwulf of Mercia and other comparable coins’, in The British Museum Technical Research Bulletin 3: 31-6). Gold of such purity is particularly malleable and easy to strike but also more prone to wear and damage. None of the surface marks seem consistent with damage or alteration caused by attempts at mounting the coin for its use as a brooch or pendant.”

Only eight other known gold coins were struck in England between c. 630 and 1257, and as the late Mark Blackburn (Keeper of Coins and Medals at Fitzwilliam Museum, Cambridge) observed, the role of gold in England during the Viking age is a tantalising subject. These gold coins were, in all probability, produced for ceremonial or other high-status payments. It is believed that only on special occasions, perhaps for prestige or, as was the case in the time of Offa, religious events, were orders given for mancuses to be struck.

Two other silver pennies of this type, by the moneyer Bosa, were noted by Dr Rory Naismith in his standard work, published in 2010. One is in the British Museum; the other, on a larger flan, was listed for sale by Patrick Finn in 1999. A third penny, found at Fulbourn (Cambridgeshire) in 2011, is recorded and a fourth, found near Wimborne (Dorset) in February 2014, was offered in the Timeline auction, 3 December 2014. All coins are from different dies to the specimen in the auction in September.

As Dr Naismith states (The Coinage of Southern England 796-865, pp.43-4), the location of one or more West Saxon mints, which appear to have maintained a low level of production from the late 8th century until the 860s, remains a matter of debate among scholars. Southampton, pre-eminent in the 8th century, had fallen into decline by Ecgberht’s time, while Winchester had primarily been of ecclesiastical importance and was not developed as an urban centre until much later in the 9th century. This new coin is much neater than any of the silver coins.

Ecgberht (771/775-839) was the son of Ealhmund, King of Kent in the early 780s. Some time after 784 he was forced into exile to the court of Charlemagne by Offa, King of Mercia, and Beorhtric, King of Wessex, who had become Offa’s son-in-law in 789. Following the death of Beorhtric in 802, Ecgberht claimed the kingdom of Wessex. Mercians initially opposed Ecgberht and a group of men from the Hwicce, based in what is now the southern West Midlands, deep in Mercian territory, fought a battle with Ecgberht’s supporters at Kempsford, near Fairford in Gloucestershire. Although the Hwicce were apparently victorious, their leaders were killed. For the next 20 years Ecgberht appears to have maintained the independence of Wessex against the kingdom of Mercia, then ruled by Coenwulf (796 -821). The decade after the death of Coenwulf witnessed a number of conflicts between the kingdoms, beginning with Ecgberht’s defeat of Beornwulf at the battle of Ellandun, near Wroughton, Swindon, in 825. Ecgberht followed that by sending his son, Æthelwulf, and an army to subdue the kingdom of Kent, perhaps in retribution for his own father’s expulsion by Offa 40 years earlier. Ecgberht started to make coins in Canterbury and Rochester and, in 829, briefly drove the Mercian king Wiglaf into exile, which gave him control of the mint in London. But within a couple of years Ecgberht’s influence as the pre-eminent ruler in southern England began to wane. Wiglaf regained his throne and East Anglia, which had requested Ecgberht’s help in defending their territory against the Mercians in the late 820s, re-asserted their independence.

Despite this loss of dominance, Ecgberht's military successes, peppered by the odd setback against the Dumnonii (the peoples occupying present-day Cornwall and Devon), fundamentally changed the political landscape of Anglo-Saxon England. Wessex retained control of the south-eastern kingdoms, and Mercia did not regain control of East Anglia. The conquered territories were administered as a sub-kingdom for a time, including Surrey and possibly Essex. Although Æthelwulf was a sub-king under Ecgberht, it is known that he maintained his own royal household, with which he travelled around his kingdom. Charters issued in Kent described Ecgberht and Æthelwulf as ‘Kings of the West Saxons and also of the people of Kent.’ At a Council held at Kingston-upon-Thames in 838, Ecgberht and Æthelwulf granted land to the sees of Winchester and Canterbury in return for the promise of support for Æthelwulf's claim to the throne. The archbishop of Canterbury, Ceolnoth, also accepted Ecgberht and Æthelwulf as the lords and protectors of the monasteries under Ceolnoth's control. These agreements, along with a later charter in which Æthelwulf confirmed church privileges, suggest that the church had recognised that Wessex was a new political power. Churchmen consecrated the king at coronation ceremonies, and helped to write wills which specified the king's heir; their support had real value in establishing West Saxon control and a smooth succession for Ecgberht's line.

Ecgberht died in 839, and in his will left land only to male members of his family, so that the estates should not be lost to the royal house through marriage. His wealth was no doubt one reason for his ability to purchase the support of the south-eastern church establishment. He was buried in Winchester, as were his son, Æthelwulf, his grandson, Alfred the Great, and his great-grandson, Edward the Elder.

Mr Preston-Morley finishes by saying: “This coin probably represents a mancus: a gold denomination that first appeared in central and northern Italy, but was current in England already before the year 800. Mancuses would have been extremely valuable coins. Each had the buying power of 30 contemporary silver coins, and this at a time when a single Carolingian denarius would buy a dozen two-pound loaves of wheat bread: a single gold mancus would therefore have bought the equivalent of 360 loaves. Such high-value coins would not have been made in the normal course of minting. They probably stemmed from an act of royal or high-status largesse; one tenth-century English king's will specifically asked that 2,000 mancuses of gold (which could also be used to measure gold by weight) be taken and minted into mancuses. Unfortunately the volume of charters and other records from Ecgberht's reign is very small, so no obvious occasion for the minting of this coin can be identified; nor is it possible to date the coin to a more specific period within Ecgberht's reign. Its lettering and monogram are executed more neatly than on the dies of contemporary pennies.”


NOTES TO EDITORS:
Dix Noonan Webb – a brief history
In 1991, its first year of trading, the company held three medal auctions and sold 1,200 lots for a total hammer price of £553,000, however 30 years later, DNW is established as the premier medal auctioneer worldwide. Two years later, in 1993, it opened a coin department which also auctions commemorative medals and tokens. In 2015 DNW added jewellery to its sales calendar as well as setting up a stand alone banknotes department and expanding into premises next door. In 2020 DNW achieved a total hammer price of £14,256,060 and the total number of lots sold across all departments was 24,400. To date the company has sold in excess of 350,000 lots totalling over £200 million.
For further press information and images please contact:
Rachel Aked - Tel: 07790732448/ Email: Rachel@rachelaked.co.uk