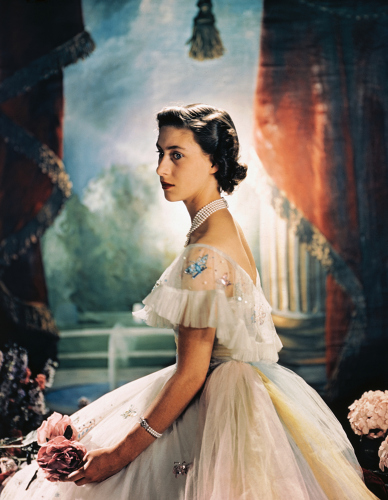 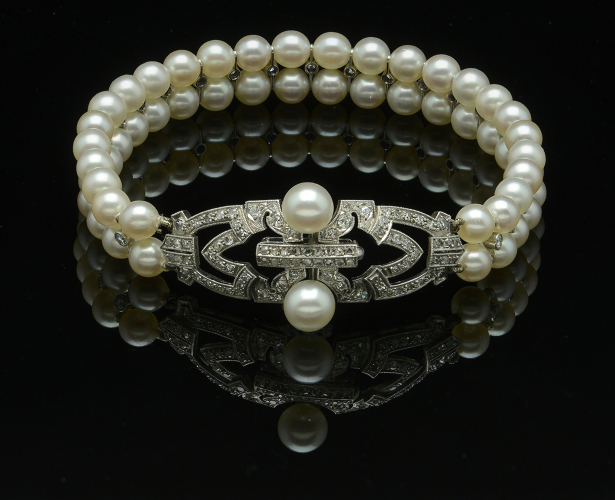 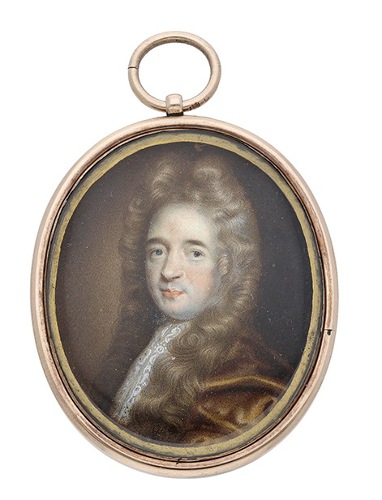 A stunning Art Deco cultured pearl and diamond bracelet owned by H.R.H. The Princess Margaret and worn for her 19th birthday photograph taken by Cecil Beaton in 1949, will be offered for sale by Dix Noonan Webb in their auction of Jewellery, Watches and Objects of Vertu on Tuesday September 14 at their Mayfair saleroom (16 Bolton Street, London W1J 8BQ). It is estimated to fetch £30,000-40,000.


Comprising a double row of cultured pearls bordering a millegrain-set line of circular-cut diamonds to a diamond and pearl openwork geometric clasp, it dates from circa 1925. It is presented in a later fitted red leather Cartier case. It was previously sold at Christie’s in 2006 in their prestigious auction of Jewellery and Fabergé from the Collection of H.R.H The Princess Margaret, Countess of Snowdon.

According to Cecil Beaton’s diary, this was the first of six portraits that he took of her before her marriage in 1960. Taken on July 8, 1949, it was published on her birthday, August 21. He recalled: “She was at Lords for the Eton and Harrow match, and got back a bit late but she is such a quick dresser that a few moments after her return she appeared changed into the new evening dress Hartnell had supplied her that morning – a dull dress of white tulle embroidered with sequin butterflies and a rainbow tulle scarf around the waist. She looked very pretty and wore quite a lot of make-up – and the eyes are of a piercing blue – catlike and fierce and so very pristine and youthful….”

He went on to say that he recalls: “This is very exciting she said as she walked up the long red carpeted arcade towards the Chinese drawing room in which we had placed all our complicated apparatus. I trust I haven’t dragged you away from Lords – Oh it wasn’t a drag, she said… “

He finished by mentioning: “She had been up till 5.30 the night before (she likes the peace and anonymity of the 400 nightclub) and towards the end of the two hour sitting, started to wilt and became very tired….”

Frances Noble, Head of the Jewellery Department and Associate Director at Dix Noonan Webb, said: “We are delighted to be selling this exquisite Art Deco diamond and cultured pearl bracelet which was formerly the property of H.R.H. Princess Margaret. The Princess was wearing this bracelet in the iconic portrait photograph taken on her 19th birthday by the Royal photographer, Cecil Beaton, at Buckingham Palace. This is a rare opportunity to purchase a very personal piece of Royal history with an impeccable provenance."

She continues: “This isn’t the first item this year that we have sold with a connection to Princess Margaret. In July, DNW sold the medals belonging to Group Captain Peter Townsend for £260,000.  He was famously romantically involved with the Princess when she was 22 years old, and their story has been told to a new generation through the Netflix series The Crown.”

Dix Noonan Webb hold four specialist Jewellery, Watches and Object of Vertu sales each year. The September 14 auction will also include a stunning Art Deco aquamarine cocktail ring by Cartier, circa 1940, accompanied by the original hand drawn design options, and estimated at £4,000-6,000.  It is being sold by the family who had originally commissioned the ring.

Other items of interest in the sale include an 1.01 carat D colour, Internally Flawless diamond ring, estimated at £7,000-8,000; an early 20th century Columbian 7 carat emerald set brooch, estimated at £5,000-7,000; a Burmese untreated 6.2 carat sapphire ring, estimated at £5,000-7,000; an early 19th century amethyst rivière necklace and ear pendants suite with an estimate of £4,000-6,000 and a 17th century portrait miniature of Jean-Baptist Colbert, French Comptroller General of Finances for Louis XIV of France, attributed to artist Petitot, later mounted as a pendant, and expected to fetch £2,000-2,600.

NOTES TO EDITORS:
Dix Noonan Webb – a brief history
In 1991, its first year of trading, the company held three medal auctions and sold 1,200 lots for a total hammer price of £553,000, however 30 years later, DNW is established as the premier medal auctioneer worldwide. Two years later, in 1993, it opened a coin department which also auctions commemorative medals and tokens. In 2015 DNW added jewellery to its sales calendar as well as setting up a stand alone banknotes department and expanding into premises next door. In 2020 DNW achieved a total hammer price of £14,256,060 and the total number of lots sold across all departments was 24,400. To date the company has sold in excess of 350,000 lots totalling over £200 million.