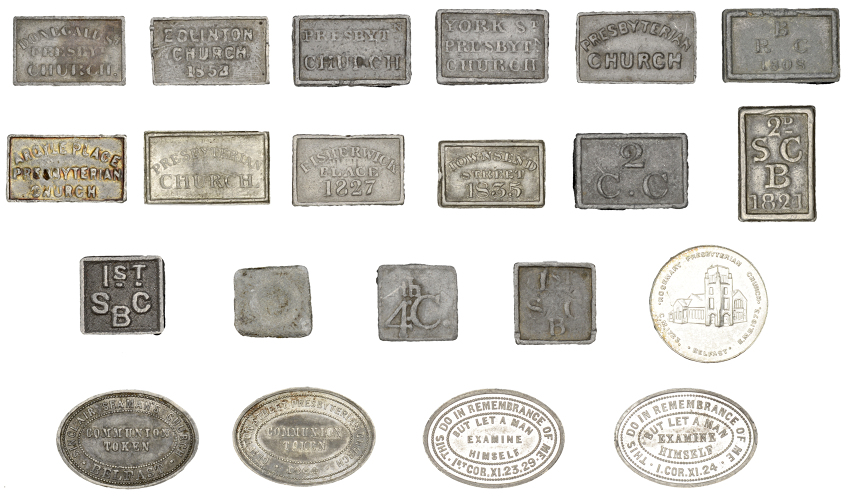 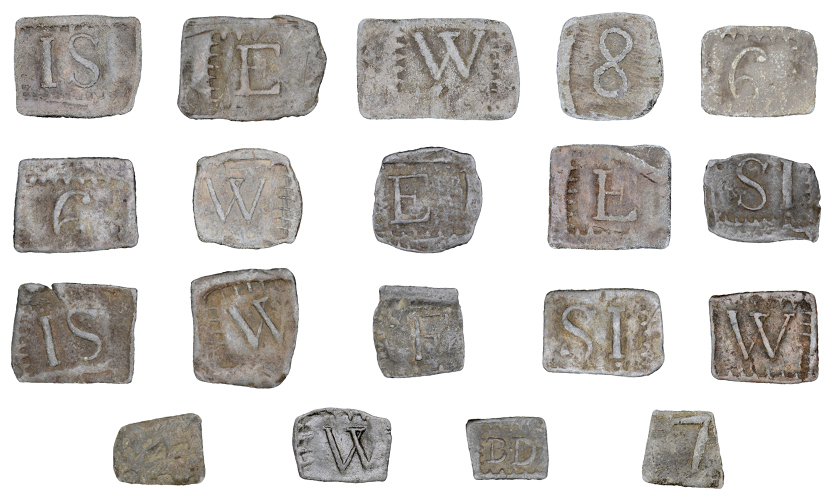 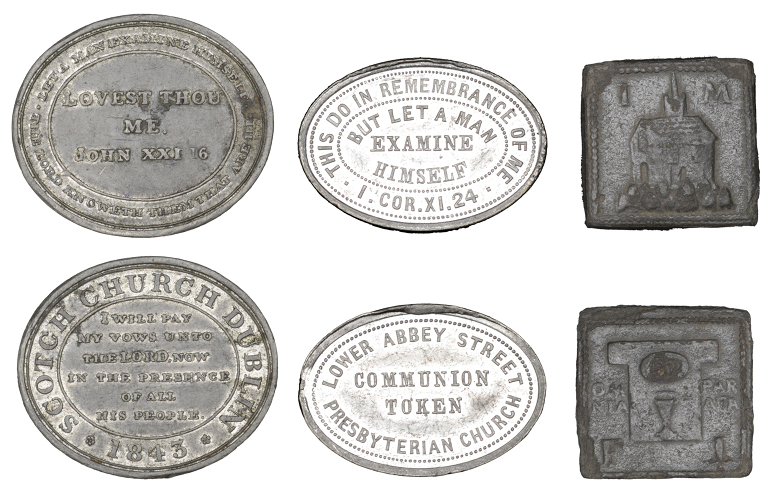 A great collection of Irish communion tokens, unlikely ever to be equalled for its breadth and scope, will be offered in a sale of Coins, Tokens and Historical Medals on Tuesday, July 6 & Wednesday, July 7, 2021 at international coins, medals, banknotes and jewellery specialists Dix Noonan Webb, based in Mayfair, London.

Amassed over many years by Delmas Parker, the collection comprises 72 lots, totalling 455 pieces. Majoring on pieces from the northern counties such as Antrim, Down and Londonderry, the group includes pieces from the Norweb, Noble and Macmillan collections, as well as that of Lester Burzinski, author of the standard reference. The collection is expected to fetch in the region of £10,000.

As Peter Preston-Morley, Head of Coin Department at Dix Noonan Webb, explains: “Communion tokens are derived from the Irish wars of religion of the mid 1600s. Protestants assembled in large church meetings, which served, not just as religious meetings, but also as political gatherings. To keep track of just who was attending these larger meetings, which were subject to activities of political spies and people that did not belong, communion tokens came into being. They were given to known local congregants by the priest or pastor to whom, like the Catholics, confession was made. The tokens would then be surrendered upon taking communion at the larger church meetings. The tokens, thus, act as passes, allowing members from smaller congregations to assemble in larger churches and not be deemed political spies, or worse, unrepentant sinners.”


Most of the towns and villages in Northern Ireland are represented in the collection, with interesting items being an extremely comprehensive group of 21 tokens from Belfast churches dating from the 1820s onwards which are estimated at £600-800; while from Londonderry, 13 tokens are expected to fetch £400-500, and from Broughshane in Co. Antrim 18 tokens for the same village carry an estimate of £200-300.

Although the majority cover Northern Ireland, there are some from the Republic of Ireland too. From County Dublin, a group of three tokens from Ormond Quay including the Scotch Church, 1843 and Lower Abbey Street Presbyterian Church are expected to fetch £150-200, and an extremely fine token from the Presbyterian Church in Tralee in County Kerry, dating from 1911 is estimated at £60-80.

Delmas Parker was the seventh child, born to a couple settling the Oklahoma prairie panhandle. His mother soon died from complications of the birth given in the sod brick house. His father put him on a train with his oldest sister, and one dollar, to grow up in Kansas with an aunt. Delmas obtained a BA degree in English as a Shakespearian actor, from the University of Iowa. Upon graduation Delmas signed with the U.S. Merchant Marines. He served 11 years on oil tankers, as the Chief Steward, hauling Venezuelan crude during all of World War II, from the deep water ports of Aruba and Curacao to the Texas city refineries. He survived two of his ships being torpedoed and sunk.

Seventh born children are natural diplomats, as they are the deciding family vote, and being physically diminutive, are forced to learn language and social coping skills during their formative years to be competitive. Being outcast from before he could remember, Delmas rose to the challenges of his early life, putting to memory and understanding vast sections of Shakespeare and the poets of the English Romantic Movement, and the American poems of Robert Browning and Henry Wadsworth Longfellow. He was a man of letters, writing constantly with his older brothers, two of whom were priests to their congregations for 50 years each. Both his older sisters lived to be 100. Delmas had command of the depths of English literature and was able to share and instill haunting and unique perspectives, as the situation required. He was a collector of vignettes of language. He loved and relished the English language, and could stand and deliver for hours, from memory.

Delmas married Alice, also from a family of seven from Oklahoma, who working as a public health nurse in Texas City, Galveston. The couple moved to Houston and Delmas became the first chef at the new Shamrock Hilton Hotel, where he cooked for Clark Gable, and later the Houston Yacht Club. Delmas was a co-founder of the Texas Culinary Society and wrote regular cookbook reviews for the Condé Nast magazine Gourmet. He was elected to the local Houston school board and provided the recipes and organization for the annual Chili Supper. He authored two books, Curry for America and Recipes for 50.

NOTES TO EDITORS:
Dix Noonan Webb – a brief history
In 1991, its first year of trading, the company held three medal auctions and sold 1,200 lots for a total hammer price of £553,000, however 30 years later, DNW is established as the premier medal auctioneer worldwide. Two years later, in 1993, it opened a coin department which also auctions commemorative medals and tokens. In 2015 DNW added jewellery to its sales calendar as well as setting up a stand alone banknotes department and expanding into premises next door. In 2020 DNW achieved a total hammer price of £14,256,060 and the total number of lots sold across all departments was 24,400. To date the company has sold in excess of 350,000 lots totalling over £200 million.