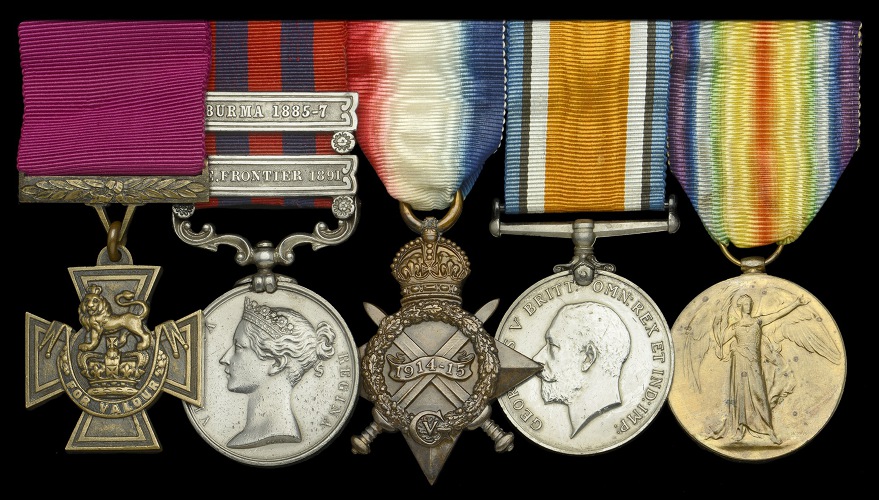 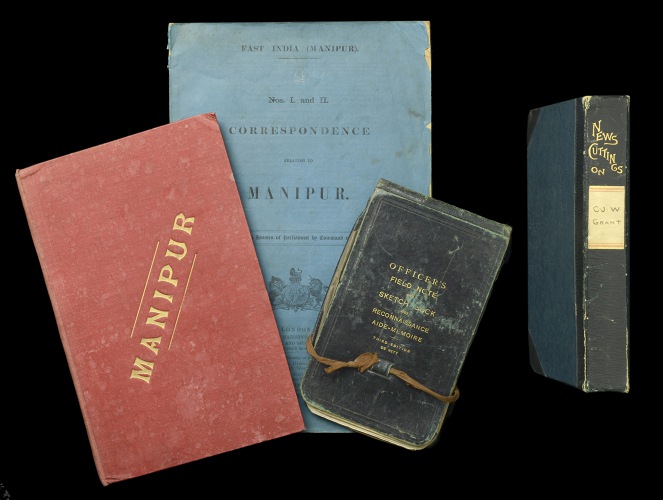 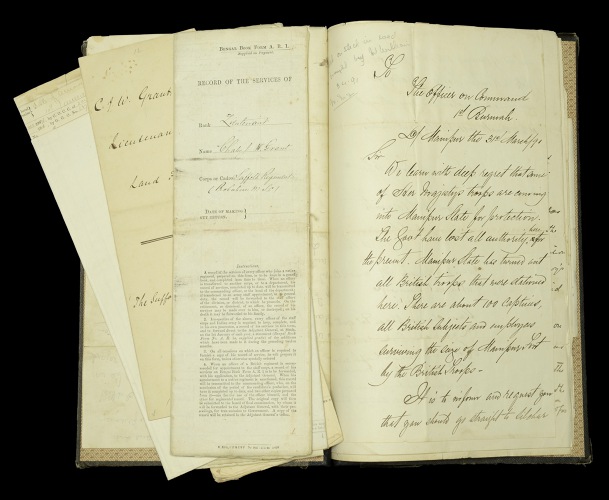 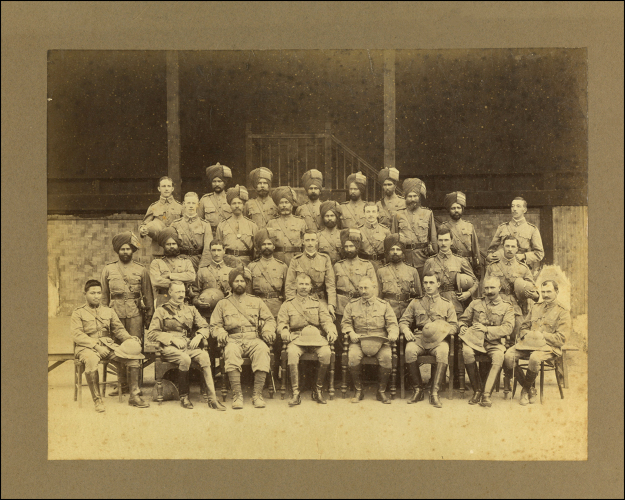 The unique and exceptional 1891 ’Capture and Defence of Thobal’ V.C. group of five awarded to 30-year-old Scotsman Lieutenant, later Colonel, C. J. W. Grant of the 12th Regiment (2nd Burma Battalion) Madras Infantry fetched £420,000 (hammer price) – a world auction record for a British Military Victoria Cross - at Dix Noonan Webb in their auction of Orders, Decorations, Medals and Militaria today (Wednesday, June 23, 2021).  It was expected to fetch £300,000-400,000 and after much competition between two telephone bidders, a relatively new collector of British Gallantry Awards purchased it.
Charles James William Grant was born in Bourtie, Aberdeenshire in 1861, the son of Lieutenant-General P. C. S. St. J. Grant, and was educated privately and at the Royal Military College, Sandhurst. He was commissioned Lieutenant in the Suffolk Regiment on 10 May 1882, and joined the Madras Staff Corps in 1884. After a long military career, he spent his later years in Sidmouth in Devon, where he died in 1932, aged 71 years.


As, Christopher Mellor-Hill, Head of Client Liaison (Associate Director), Dix Noonan Webb commented: “We are very happy to see a new auction world record price for a ‘British Military Victoria Cross’ as well as an in-house auction record for a medal at DNW. This further underlines the stature of The VC as the world’s most famous gallantry award. Col. Grant’s bravery for his fighting leadership in the capture and defence of the Fort at Thobal in Manipur, Eastern India in 1891, earned him the tribute of one of his Gurkha soldiers who said;  “How could we be beaten under Grant Sahib? He is a tiger in fight.” That catches the essence of his brilliant capture and subsequent defence of the fort in trying to save the lives of the captives of the rebel commander who had overthrown the new Maharajah in Manipur.”


The V.C was sold together with a substantial associated archive of historical importance - items of particular significance including: Grant’s unpublished leather bound ‘Officer’s Field Note and Sketch Book and Reconnaissance Aide-Memoire’ in which he meticulously records the march to Manipur and the capture and subsequent defence of Thobal, illustrated by several detailed sketches of both actions and positions; and a file of original letters, including the negotiations between Grant and the Manipuris and a coded message from Grant in Greek characters to the relief force.

Upon hearing of the treachery at Manipur in March 1891, Grant immediately set out to relieve the presumed British captives and exact retribution; advancing his 80 man Tammu detachment, comprising 40 Ghurkas and 40 Punjabi troops, towards Manipur under continued desultory opposition, he stormed the enemy position at the head of his men under a heavy fire at Thobal, driving the 800 strong foe from their entrenched defences.

The story continues: Taking up a defensive position within improvised fortifications, Grant then became surrounded by an estimated 2000 of the returning enemy which attacked the small besieged force over a period of eight days. Holding out against overwhelming odds, Grant led a number of brilliant sallies to dislodge and disperse the Manipuris each time they approached and then, in negotiations over the release of prisoners, deceived them into thinking they were facing a much larger force – he recalled in his notes that he ‘borrowed two stars from a jemadar’s shoulder straps and placed them on his own. He was no longer a Subaltern commanding a small detachment, but a Colonel, with his regiment at his back.’

With dwindling ammunition and growing disease among his ranks, Grant successfully withdrew his force to link up with reinforcements, and, leading his men to the attack once more in taking an enemy fort. Badly wounded, he recalled ‘the bullet had gone through the root of my neck just above the shoulder and carried all the cloth of my collar and shirt right thro’ the wound leaving it quite clean’ - after which he was carried triumphantly into Manipur by his men and those concerned in the murder of British officers were brought to justice and punished.

Two months later, the London Gazette stated that the V.C had been awarded ‘For the conspicuous bravery and devotion to his country displayed by him in having, upon hearing on the 27th March, 1891, of the disaster at Manipur, at once volunteered to attempt the relief of the British Captives, with 80 Native Soldiers, and having advanced with the greatest intrepidity, captured Thobal, near Manipur, and held it against a large force of the enemy. Lieutenant Grant inspired his men with equal heroism, by an ever-present example of personal daring and resource.’

A Gurkha also paid tribute to Lieutenant Grant, by saying: “How could we be beaten under Grant Sahib? He is a tiger in fight. When hundreds of Manipuris were coming close he just took ten men out to stop them, and in a minute they had beaten the enemy back. We could not help winning under such a sahib.”

The Victoria Cross is the highest military decoration, awarded for valour in the face of the enemy. Since its introduction in 1856 there have been 1354 recipients. Charles James William Grant was the 406th recipient.