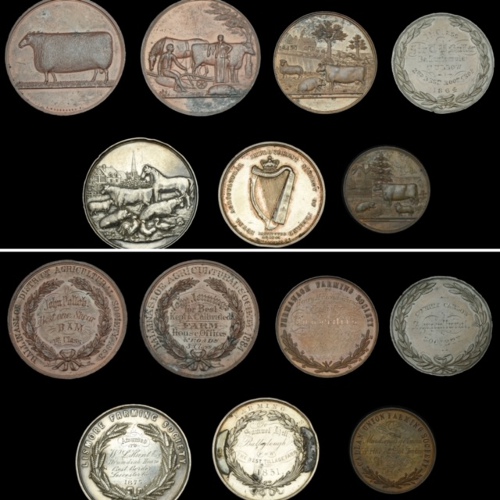 A collection comprising 450 lots of British, Greek, Roman, Byzantine and Islamic Coins from the Collection of the late Richard Plant fetched a combined total of £202,895* – double its pre-sale estimate - in a sale of Coins and Historical Medals on Tuesday February 9, 2021 at International coins, medals, banknotes and jewellery specialists Dix Noonan Webb. Comprising thousands of individual coins, which made up half of the entire 900-lot sale, all the coins were sold.

The Reverend Richard J. Plant (1928-2020), who died peacefully at his home in Bawtry, South Yorkshire, on 2 August 2020, had a distinctive approach to writing about coins which arose from a life-long quest to make them accessible to collectors who lacked his own classical education. His articles and books, typically illustrated by his own meticulous hand-drawn illustrations brought coins to life - he focused on making connections to the history, myths, places, objects and people on them.

Also in the sale were 38 lots of Irish Historical Medals from the Collection of the late Barry Woodside. This was also 100% sold and saw a group of seven agricultural medals ranging from Fermanagh Farming Society to Callan Union Farming Society sell for £744 against an estimate of £200-300 [lot 748], while two copper medals of the Order of the Friendly Brothers of St Patrick, dating from 1763, fetched £570 against an estimate of £80-100 [lot 741].

Another interesting collection was a group of European Art Medals which saw a very rare French bronze plaque of Cleopatra, dating from 1902 by E. Fremiet sell for £1,612 against an estimate of £600-800 [lot 811].

Elsewhere, an extremely rare Henry Murdac, Archbishop of York penny from the reign of Stephen (1135-1154) sold for £22,320 against an estimate of £10,000-15,000 to a UK private collector. The coin had been found at Skelton (N. Yorkshire). Henry Murdac, a Yorkshireman who, as a young man, was a Cistercian monk at Clairvaux Abbey, was appointed to head Fountains Abbey in 1144. A strict disciplinarian, he opposed King Stephen’s appointment of his nephew, William Fitz Herbert, as Archbishop of York. Fitz Herbert was deposed at the Council of Rheims in 1147 and Murdac installed as the new archbishop at the instigation of his friend from Clairvaux, Pope Eugenius III. When he arrived back in Yorkshire William, Duc d’Amale and Hugh du Puiset, the treasurer of York, organised opposition to his appointment. A stand-off ensued in which Murdac excommunicated Aumale, Puiset and the citizens of York and Puiset excommunicated Murdac, but then left the city of York for Winchester. In retaliation for Stephen’s refusal to recognise his status, Murdac met with David I of Scotland and his entourage in Carlisle, probably to offer support for David’s plan to invade Yorkshire, which was abandoned in the first half of 1149. Murdac imposed an interdict on York and the following year Stephen finally recognised him as Archbishop, even though there remained much opposition to him within the city and he had resided at Ripon since 1148. Murdac was able to enter York in January 1151 when he was formally reconciled with King Stephen; he died at Sherburn-in-Elmet on 14 October 1153 [lot 118].

Also of note was a rare Anglo-Gallic gold coin from the reign of Edward the Black Prince, from La Rochelle which sold for £12,400 – it was purchased by a private collector [lot 263].

Following the sale, Peter Preston-Morley, Head of the Coin Department and Associate Director, Dix Noonan Webb, commented: “We were very pleased with the results of the sale, which was 98% sold overall. At the moment, each of our sales is attracting new buyers and coins of all conditions are selling, it is really staggering! Collectors of all ages from people in their 20s to the retired, are discovering coins and we hope that this will continue.”