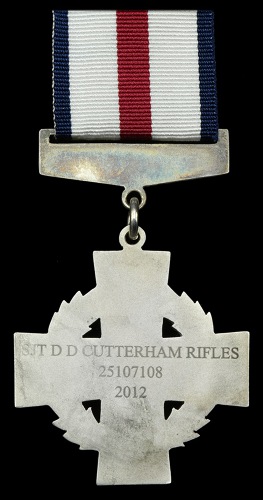 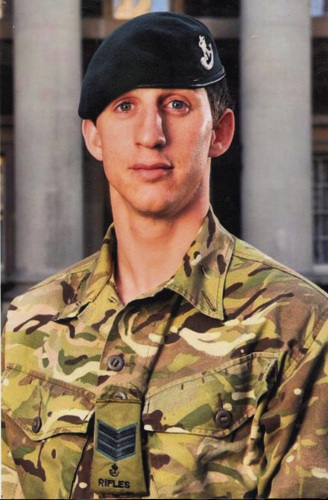 The superb ‘Afghanistan 2011’ Conspicuous Gallantry Cross group of seven awarded to Colour Sergeant Deacon Cutterham, 1 Battalion, The Rifles, formerly Royal Gloucestershire, Berkshire and Wiltshire Regiment – who risked his own life in dealing with a hand grenade which fell in among his men - will be offered by Dix Noonan Webb in their live online auction of Orders, Decorations, Medals and Militaria on Thursday, November 12, 2020 on their website www.dnw.co.uk. They are estimated to fetch £100,000-120,000.


The Conspicuous Gallantry Cross was instituted as a result of the 1993 review of the British honours system and is second in seniority only to the Victoria Cross. The C.G.C. was awarded for the first time as a result of the Bosnian War in 1995 and to date 60 such awards have been made, 39 of which were for the war in Afghanistan. A total of four Conspicuous Gallantry Crosses were awarded to members of The Rifles for Afghanistan, Cutterham’s being the last such award made.

Colour Sergeant Cutterham, who grew up and still lives in Bristol, joined the British Army on the January 9, 2000 at the age of 16. He served back-to-back tours of Iraq and Afghanistan and was awarded the CGC for undoubtedly saving the lives of his patrol when he anticipated an ambush near Tabila Village, Nahr-e-Saraj District, on May 24, 2011. His citation said he had shown "gritty leadership" and that his "gallant act saved lives and inspired his men".

The medals are accompanied by a highly detailed personal account of Cutterham’s career. As he explains about the events on May 24: “It was then I heard a familiar ‘ping’ noise and knew exactly what it was, I looked up and in slow motion I could see a hand grenade which had been thrown from the other-side of the wall and landed roughly a metre in front of me. I liken the sensation to a wasp flying down your top and you can’t move quick enough to get that t-shirt off – only if the grenade explodes, it’s not just a sting, it’s the life of me and my team.” Having run towards the grenade, picked it up and thrown it away all in a matter of seconds Cutterham then proceeded to extract his men from the killing zone without sustaining casualties. Cutterham had an even closer brush with death later on the same tour, when an IED blew him 3 metres into the air and 15 metres backwards.

Another extract details: “A few months later, once we had returned from Herrick 14, my CO called me into his office at 13.30. I was nervous, as I didn’t know why I was being called in, so stood to attention outside and was marched into the office by the RSM. As I marched in, I could see the CO standing in front of me, a bottle of Champagne to the left and another Officer to the right. I halted in front of the CO, he then saluted me told me that I have been awarded the CGC for my actions in Afghanistan and handed me a glass of Champagne. I was overcome with emotion, lots of memories of the tour flowed back, it was an extremely tough tour where I had lost friends and it was overwhelming to be recognised for my actions on the battlefield. Roughly a year later, I was presented my medal at Buckingham Palace by Prince Charles in front of my family. I will never forget it, truly to this day the proudest moment of my life.”

He finished by saying: “The 19 years I served in the Army were the best of my life. I remember walking into the recruitment office in Bristol and meeting a man called Dave who was a Sgt in the 1RGBW and saying to him “I want to travel, do lots of sport and do a bit of soldering” he said “well you’ll do plenty of that here” and that I did! I lived 100 lifetimes in the British Army, it felt more like one big adventure than a job, it’s fantastic organisation and I have a lot to be thankful to it for.”

Asked why he is selling his medals, he commented: “My medals were hard earned and I will be investing the proceeds carefully to help ensure my future financial security.”

Mark Quayle, Associate Director, Dix Noonan Webb commented: “Colour Sergeant Cutterham's gallant conduct epitomises cold, calculated, courage under the most extreme of circumstances. The award of the CGC reflects that, and it is a privilege to be handling the sale of his medals upon his behalf.”