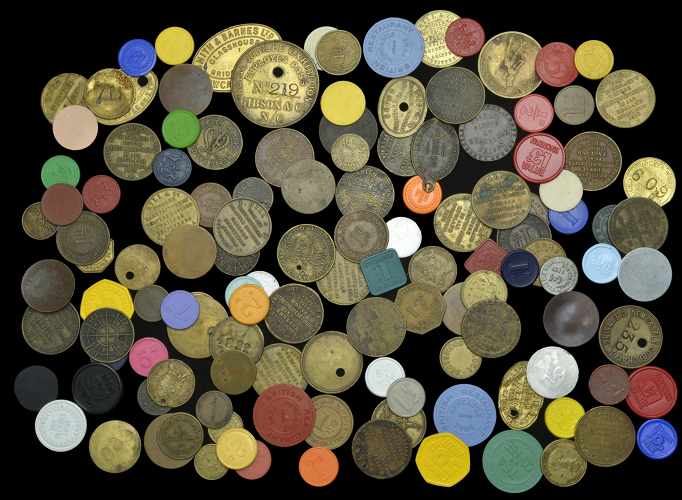 A Fleet Street halfpenny featuring the sign of the King of Sweden (King Gustavus Adolfus), believed to be the only known specimen, became the first 17th century token to achieve the highest individual price paid in any major London coin sale in a live/online auction of British Tokens, Tickets and Passes at International coins, medals, banknotes and jewellery specialists Dix Noonan Webb on Thursday, August 27, 2020. Bought by a UK dealer, the token which sold for £2,976 was part of the Collection of London 17th Century Tokens formed by the late Cole Danehower (Part II), was estimated to fetch £200-300, and had been found in the River Thames in 1991 [lot 10].

The sale comprised 759 lots and was 98.8% sold. The second highest price of the sale was paid for a very fine charming but crude London (City) octagonal Penny from Little Somer’s Key (Billingsgate) which sold for £2,728 against an estimate of £300-£500.
Also from the Danehower Collection, it attracted a lot of interest and was acquired by a UK private collector [lot 35]. A third interesting lot from the Danehower Collection was a token of Thomas Farener, not in itself a great rarity but it is said that the Great Fire of 1666 started at his premises. After attracting much interest, it sold for £1,612 to a UK private collector against an estimate of £180-220 [lot 56].

The auction included several other Collections and among the 18th Century Tokens from the Collection of the late David Barry Bailey was an extremely fine and attractively patinated Milton’s first Penny from Ipswich (Suffolk) bearing the bust of Cardinal Wolsey and dating from 1795. This was one of only four known and with a distinguished provenance from the Cokayne Collection, it had been estimated at £900-1,200, and was acquired by a USA private collector for £2,480 [lot 436]. Also from the Bailey Collection was a halfpenny from Beverley in Yorkshire, dating from 1797, which had also been in the Cokayne Collection and realised £2,356 against an estimate of £500-800. The edge inscription on this token made it a great rarity and it was keenly bid on, eventually being acquired by UK private collector [lot 502].

From the final part of the Collection of the late Jeffrey Gardiner was a comprehensive group of tokens from Newcastle-upon-Tyne which was acquired for £1,612 by a UK private collector from the North-East against an estimate of £400-600 [lot 718].

As Peter Preston-Morley, Specialist and Associate Director, Dix Noonan Webb, explains: “We were very pleased with the result, and particularly with the prices paid for London tokens from the Cole Danehower collection. Indeed, this is the very first time that a 17th century token has been the subject of the highest individual price paid at any major London auction sale. The four portions of the Danehower collection of London tokens of this era sold by DNW have collectively totalled just over £100,000, which demonstrates just how much new-found interest there is in this series. Other elements of the auction were well received, with the ‘Conder’ collection formed by the late David Bailey achieving a sell-out £133,852.”