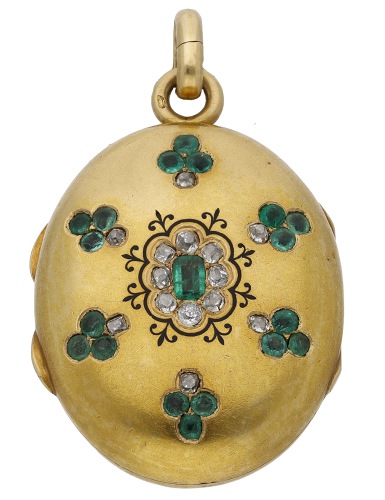 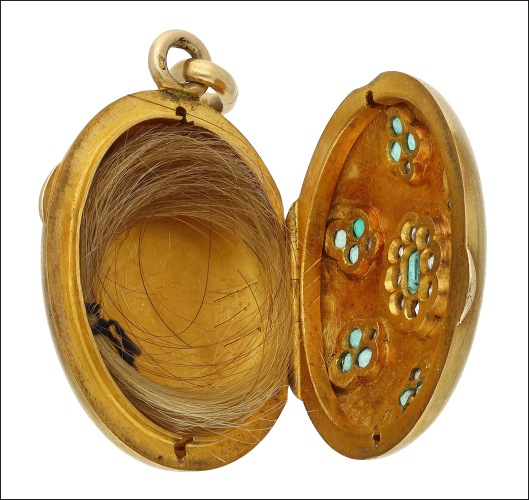 Six items from the personal collection of the famous French actress Sarah Bernhardt (1844-1923) including an emerald and diamond set locket, enclosing a lock of her son’s hair, will be offered for sale by International coins, medals, banknotes and jewellery specialists Dix Noonan Webb in a LIVE ONLINE AUCTION of Jewellery, Watches and Objects of Vertu on Tuesday, June 9, 2020 at 1pm, through their website www.dnw.co.uk. The French emerald and diamond set oval locket pendant is estimated at £400-£600 and within the locket is a small lock of blond hair from Bernhardt’s son, Maurice.

The selection of lots is being sold on behalf of her great-great-granddaughter, Michele Gross, who lives in the UK. She said: “I inherited the items from my mother and father – my father was the great grandson of Sarah Bernhardt and I have a delightful photograph of him and his sister, Terka, in a garden on Sarah’s knee. I have cherished the pieces for many years and wore the locket occasionally. I have decided to sell the items as I am the last of the English part of the family and for the past few years they have been in my jewellery box for safe keeping.”


Also included in the sale are two further lockets, as well as a silver dressing table pot and a tortoiseshell page turner, both incorporating Sarah Bernhardt’s monogram – estimates range from £70 to £500.

Born one of three illegitimate daughters of Julie Bernard, a Dutch courtesan who had established herself in Paris, Sarah, (originally named Henriette-Rosine Bernard) had a difficult start in life and was a wilful child. At first she wanted to become a nun, but one of her mother’s lovers, the Duke of Morny, Napoleon III’s half brother, decided that she should be an actress, and when she was 16, arranged for her to enter the Paris Conservatoire, the Government sponsored school of acting. Leaving the Conservatoire in 1862, she was accepted by the Comedie-Francaise, the national theatre company, as a beginner on probation. Not initially excelling, her acting contract was cancelled in 1863 when she slapped the face of a senior actress after she had been rude to her younger sister.

Quickly gaining somewhat of a reputation in her private life, Sarah became the mistress of Henri, Prince de Ligne, and in 1864 gave birth to her only child, a son, Maurice. Relationships came and went throughout her life including liaisons with many famous men, allegedly the French writer Victor Hugo, and the Prince of Wales, the future King Edward VII. From 1866, Sarah began to establish herself as a successful actress and after signing a contract with the Odéon theatre, she had the opportunity to play lead roles such as Cordelia in King Lear, her audiences apparently charmed by the lyrical quality of her voice which was described as a ‘golden bell’. Her finest roles included Dona Sol in Victor Hugo’s Hernani, said to have brought tears to the author’s eyes. She starred in some of the most popular plays of the late 19th / early 20th century including La Dame aux Camelias by Alexandre Dumas, Desdemona in Shakespeare’s Othello, and Fédora and La Tosca by famous playwright Victorien Sardou. She also played several male roles in her career, appearing as Hamlet in Paris and London in 1899. By the 1870s, Sarah was a leading actress in her profession, renowned for her expressive interpretations and her commanding presence on stage. In 1880, she formed her own travelling theatrical company, becoming an international success and appearing on stage throughout Europe, the United States, Canada, and later Australia and South America.

In 1905, whilst touring in South America, she injured her leg jumping from a parapet in La Tosca. By 1915, gangrene had set in and the leg needed to be amputated, but she still continued her gruelling schedule of tours in America and Europe. In 1914 she was made a member of the Legion of Honour. She was also one of the first actresses to star in moving pictures, and to make sound recordings. An eccentric character, Sarah had always taken her career into her own hands, her motto ‘Quand meme’ translating appropriately as ‘no matter what’. By the time of her death in 1923, she was hailed as one of the greatest actresses of the late 19th/early 20th century, and perhaps is now seen as one of the best known figures in the history of the stage.

The sale will also include three lots relating to the Duke of Wellington. A 19th century gold watch key, circa 1820s/1830s with engraved intaglio crest and initials ‘A W’ below, for Arthur Wellesley, 1st Duke of Wellington is estimated to fetch £700-900.

Due to the current COVID 19 situation, there will be no physical viewing of the auction. Prospective bidders are encouraged to consult DNW’s website (www.dnw.co.uk) where all lots are illustrated, with Condition Reports. Customers are able to bid online (DNW make no additional charge for this service) or leave commission bids prior to the auction. Please note

that the situation with regards to dispatch of lots is subject to constant review and should it be necessary lots can be securely stored without charge for as long as required. DNW are donating 5% of all buyers' premium during these uncertain times to the NHS Charities Together Covid-19 Appeal.