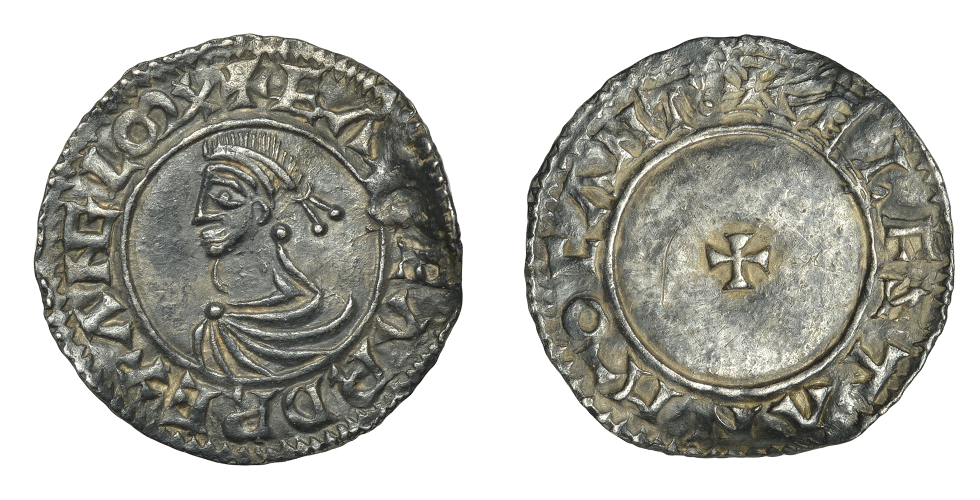 An extremely rare Silver penny of the boy king Edward the Martyr - the teenager who ruled Saxon Britain in the 10th century – has been found on the Isle of Wight and is estimated to fetch £5,000-7,000 when it is sold in an online/ live auction at Dix Noonan Webb, the international coins, medals, banknotes and jewellery specialists in their sale of Coins on Wednesday, April 22, 2020 at 10am on their website www.DNW.co.uk.

It was discovered in March 2018 by a 68-year-old retired council worker using a Minelab E-Trac metal detector. After metal detecting for 28 years, the detectorist, who wishes to remain anonymous, was on a ploughed field with his local detecting club. Frustrated at only finding three .22 lead bullets in one spot, and ready to give up for the day he then got another signal in the same area and dug down 4-5 inches to uncover the Saxon penny.

The coin is in remarkable condition, and has a fine portrait of the boy king wearing a diadem and facing left. Around is the legend “EDPEARD REX ANGLORX “. (Edward king of the English). On the reverse is a small cross pattee in the centre with the legend around “AELSTAN M’O CANT”. (Aelfstan moneyer of Canterbury).

There were thirty nine mints operating around the country at this time with three moneyers working at Canterbury. Edward only ruled briefly, between the years 975-978 A.D. and was only 13 years old when he was crowned king after the death of his father Eadgar. Edward was assassinated on March 18 at the Saxon hall where Corfe Castle in Dorset, now stands, by supporters of his half brother Aethelred.

Edward became venerated as a Saint and Martyr and his bones were exhumed and taken to a shrine at Shaftesbury Abbey in 1001. The shrine was lost during the dissolution of the Monasteries in the 16th century, but his bones were rediscovered in 1931 and now reside at a shrine in the Russian Orthodox Church in Brookwood, Surrey. The coin is recorded under the PAS BERK-D58801. EMC 2019. 0338