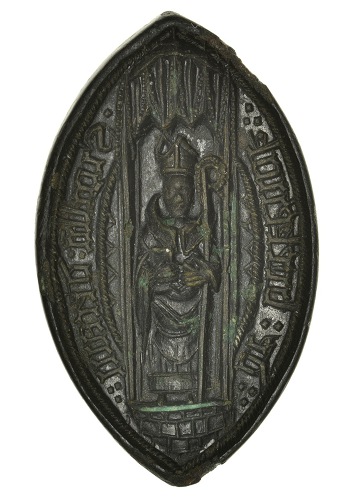 Dix Noonan Webb, the international coins, medals, banknotes and jewellery specialists, will be offering a perfectly preserved 15th century Bronze Seal Matrix, the earliest known surviving example from Brecon, in their sale of Jewellery, Watches, Antiquities and Objects of Vertu to be held on Tuesday, March 17 2020 at 1pm at their auction rooms in central Mayfair - 16 Bolton St, London, W1J 8BQ. It is estimated to fetch £2,000-3,000.

53 year-old Malcolm Shepherd was landscaping his wife’s parents’ garden in North Wales last Summer when he found the perfectly preserved 15th century Bronze Seal Matrix in the cleared soil while using a Minelab Equinox metal detector. The property was in Old Colwyn, which is by the sea and lies adjacent to an old Roman road.

The Seal is of a pointed oval shape measuring 48mm high and has an image in the centre of a Bishop standing wearing his mitre, holding a crozier in his right hand and a book held to his chest with his left hand, all within a gothic styled canopied archway. There is an inscription around the Seal in black lettering which reads
“SIGILLIN:DECANI:DE:BREKENOK:” (the seal of the dean of Brecknock). Brecknock is the Medieval name for Brecon and St John’s Priory was built there in 1093 but dissolved by Henry VIII in 1538. It was a popular Pilgrims site with the Holy ‘Golden Rood’ of Brecon in the nave.

The Dean is an elected priest whose duties include assisting the Bishop and the Seal itself would have been used in Official communication by making an impression in wax attached to a document.

This Seal is the earliest surviving example from Brecon. It has been recorded by the Portable Antiquities Scheme: WREX-DB2C7B.

Professional Gardener Malcolm, who’s originally from Manchester but moved to Wales about five years ago, said: “I have been metal detecting for approx eight years. I found the ‘Beeston hoard’ of silver groats in 2016 (the groats are now at the Grosvenor museum) which was exciting, however the seal was a jaw dropping moment, when the detail was revealed.”

Nigel Mills, Antiquities Expert at Dix Noonan Webb, commented: “This exciting new discovery reveals the importance and architectural beauty of the Ecclesiastical Priory at Brecon in the 15th century.”