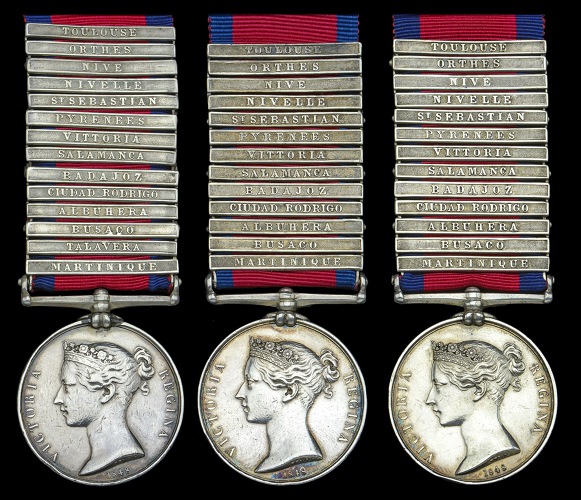 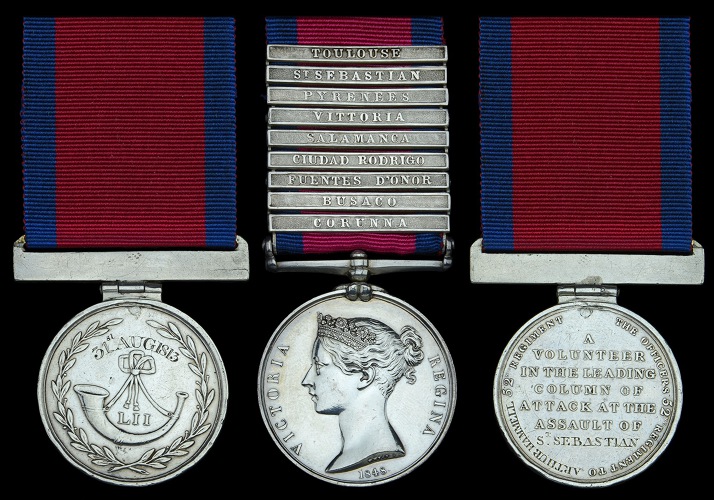 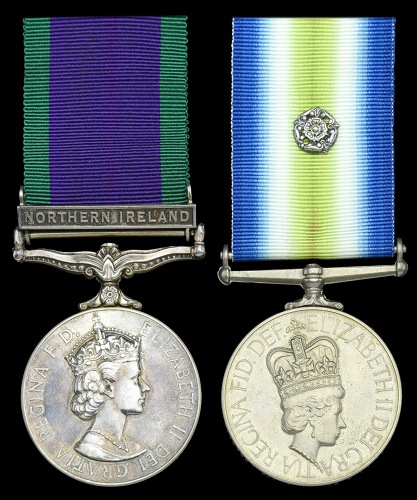 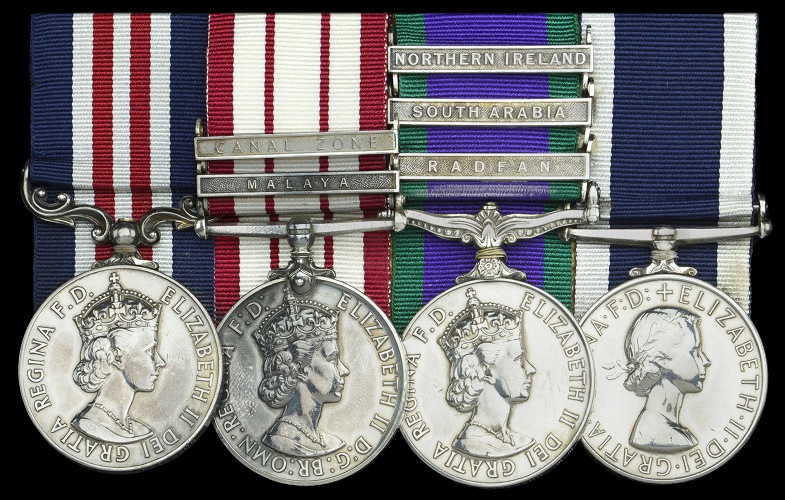 The celebrated trio of Peninsula War medals awarded to the Hardy brothers of the 7th Fusiliers sold for £47,120 at Dix Noonan Webb in their two-day auction of Orders, Decorations, Medals and Militaria on Wednesday & Thursday, December 11 & 12, 2019 at their auction rooms in central Mayfair (16 Bolton St, London, W1J 8BQ). They had been estimated to fetch £20,000-30,000 and after much interest were bought by an internet bidder [Lot 782].

The Hardy Brothers were born in Manchester and
the provenance of the collection can be traced back to the Lord Cheylesmore Collection of 1880. Sergeant-Major John Hardy, was wounded at the battles of Albuhera and Salamanca, and was a Volunteer at the storming of St Sebastian. His Military General Service medal 1793-1814 had 14 clasps; while Corporal Peter Hardy, who was wounded in the neck at the capture of Martinique, twice by musket balls in the leg and thigh at the battle of Albuhera, and again in the arm at the battle of Salamanca had been awarded Military General Service medal 1793-1814 with 13 clasps and Private James Hardy, the first of the three brothers to enlist and whose health upon discharge in 1824 was ‘much impaired by hard services’ also had a Military General Service medal 1793-1814 with 13 clasps.

The second highest price in the sale was also for a Peninsula War Medal. The extremely rare Military General Service and ‘St Sebastian’ Forlorn Hope Medal pair awarded to Private Arthur Hammell, 52nd Foot, who was slightly wounded in the left leg at Corunna in January 1809, and ‘Volunteered to lead the attack at the Storming of St. Sebastian’ sold for £27,280 against an estimate of £8,000-10,000. Arthur Hammell was born in the Parish of Lago, near Portadown, County Armagh, and was enlisted into the 52nd Foot at Stirling on 14 May 1804, aged 18. It was also bought by a bidder on the internet [Lot 228].

Elsewhere, the Crimean War D.C.M. awarded to Private John ‘Butcher Jack’ Fahey, 17th Lancers, one of the most colourful characters who rode in the charge of the Light Brigade at Balaklava. Estimated at £10,000-15,000, this sold for £23,560 to a private collector in the room [Lot 70].

A fine ‘Operation Nimrod’ campaign pair awarded to Staff Sergeant I. N. Pape, B Squadron, Special Air Service, formerly 5th Royal Inniskilling Dragoon Guards, who was a member of the iconic S.A.S. hostage rescue force during the Iranian Embassy Siege on 5 May 1980. He was accredited with the eventual capture of ‘Ali’, real name Fowzi Nejad, the only terrorist to survive the storming of the embassy, sold for £19,840 to a private collector in the room [Lot 682].

A well-documented and rare 1964 ‘Radfan operations’ M.M. group of four awarded to Colour Sergeant W. G. B. Paterson, 45 Commando, Royal Marines, an expert mountaineer who survived a 100 foot fall during a training accident, breaking nearly every bone in his body, only to go on two years later and distinguish himself leading his men during perilous night time insertions over unknown mountainous terrain. Over the course of May - July 1964, Paterson came to fore during the actions of Wadi Dhubsan and Wadi Aimaan, the latter being an ambush which led to a fierce ‘contact’, and the death of several native dissidents. This was one of only seven M.M’s awarded for the Radfan Campaign and sold for £17,360 to an internet bidder. William George Begg Paterson was born in Glasgow, Scotland in November 1931 [Lot 185].

NOTES TO EDITORS:
Dix Noonan Webb – a brief history
In 1991, its first year of trading, the company held three medal auctions and sold 1,200 lots for a total hammer price of £553,000. Two years later it opened a coin department which also auctions commemorative medals and tokens and in 2015 DNW added jewellery to its sales calendar. Last year it set up a standalone banknotes department and expanded into premises next door. In 2018 DNW achieved a total hammer price of £11,676,580 and the total number of lots across all departments was 20,273. To date the company has sold in excess of 300,000 lots totalling £155 million.