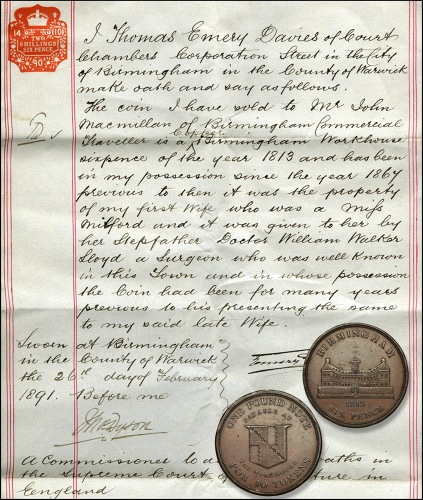 Dix Noonan Webb, the international coins, medals, banknotes and jewellery specialists are delighted to be selling the largest copper coin ever issued in Great Britain. It will be included in an auction of British Tokens on Thursday, October 3, 2019 at their auction rooms in central Mayfair - 16 Bolton St, London, W1J 8BQ. The extremely rare sixpence coin which weighs 163g (the weight of 46 of todays 1p) and measures 48mm in diameter, dates from 1813 and is estimated at £2,000-3,000.

As Christopher Webb, Director and Head of the Coin department, Dix, Noonan, Webb explained: “This coin was produced in Birmingham to be used in a workhouse, only 10 specimens are now known and this one is arguably the finest available to commerce. It is being sold as part of a group of 19th Century Tokens from the Collection from the Late Francis Cokayne, and will be sold with a related affidavit as to its 19th century provenance.”

He continues: “Believed to have been in circulation for a short time, the coins owe their probable existence to the temporary low price of copper relative to silver at the time. The last time this token was on the open market, at the second Norman sale in 1905, it brought £17 10s (the equivalent of £2,100 today), easily the top price in that auction.”

The affidavit, signed by Emery Davies, reads: “I Thomas Emery Davies of Court Chambers Corporation Street in the City of Birmingham in the County of Warwick make oath and say as follows: The coin I have sold to Mr John Macmillan of Birmingham Commercial Traveller is a Copper Birmingham Workhouse sixpence of the year 1813 and has been in my possession since the year 1867 previous to then it was the property of my first wife who was a Miss Milford and it was given to her by her stepfather Doctor William Walker Lloyd a surgeon who was well known in this Town and in whose possession the Coin had been for many years previous to his presenting the same to my said late Wife”. ‘Sworn at Birmingham in the County of Warwick the 26th day of February 1891. Before me. Jno. Dyson, A Commissioner to administer oaths in the Supreme Court of Judicature in England.”