A 17TH CENTURY RING DISCOVERED BY METAL DETECTORIST ON THE SHORES OF LOCH LOMOND AND BELIEVED TO HAVE LINKS TO KING CHARLES II SELLS FOR £17,360 BY DIX NOONAN WEBB 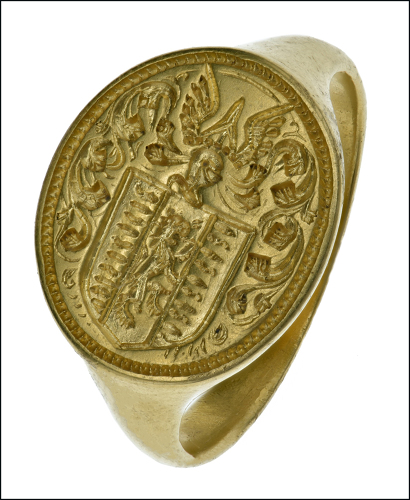 A fascinating gold armorial ring, dating from the 17th century, discovered metal-detecting on the shores of Loch Lomond in Scotland sold for £17,360 in an auction of Jewellery, Watches and Objects of Vertu at Dix Noonan Webb in London on (today) Tuesday, September 10 2019. It was expected to fetch in the region of £10,000.

The finder, Michelle Vall from Blackpool, started the hobby of metal detecting just over two years ago, and on a trip to Loch Lomond in Scotland last November, she struck gold with the discovery of a beautiful ring at Ducks Bay, on the shores of the lake. She declared the ring as Scottish Treasure Trove, but was told that the state did not want to purchase it. Following the sale, she said: “It has been an exciting time from the second I held the ring in the palm of my hand to todays auction. To investigate something so precious and full of history with the help of Dix Noonan Webb and the story that has unfolded has been the most amazing experience.”

She continued: “I am hoping the ring has been purchased by someone who is able to display it and so educate people on the tragic story of Edward Colman and his unfortunate execution, so it can be appreciated for the historical Treasure that it is.”

DNW have further researched the ring and discovered that the crest belonged to the Colman family of Brent Eleigh, Suffolk who used the arms shown on the bezel of the ring from 1598 and this ring is thought to date from 1640-80. The Colman family made their fortune in the mid 16th century from the cloth trade, in the Suffolk town of Lavenham. It is thought to have belonged to Edward Colman, who became a convert to Catholicism and had a reputation as an effective proselytiser of his new faith, gaining a number of converts. Edward also had high political ambitions for himself, which began in 1661 when he established himself at court acting as a bodyguard to the King. By 1673 Edward had been appointed Secretary to fellow Catholic, Mary of Modena, wife of James, Duke of York, the younger brother and heir presumptive to the Protestant King Charles II. During the end of the 1670s James and Mary had been living in Edinburgh and in 1680 the King made James Commissioner for Scotland.

The 17th century remained a period of high tension between Protestants and Catholics, and Edward undertook approaches on behalf of the Duke of York (whether authorised or not) to both the Papacy and the Catholic French court, trying to gain support and funds to reduce James’s reliance on the anti-Catholic parliament. There was also a recent new discovery that on the inside of the ring beneath the Colman crest is an engraved “I” for Jesus, a personal symbol that could indicate that the owner was a member of the “Jesuits”, an undercover society of Catholics which was illegal in England at that time.

In September 1678, Titus Oates made fanciful claims of a ‘Popish Plot’, accusing nearly 550 Jesuits of involvement in plots to assassinate the King; one of those accused being Edward Colman. As the claims were fabricated, no direct evidence of plans for regicide could be found, however searches of Edward Colman’s correspondence with the French Jesuit, Fr. Ferrier, confessor to Louis XIV, detailed fanciful schemes of obtaining the dissolution of the current Parliament, in the hope of replacing it with a new pro-French (and therefore pro-Catholic) one. In the wake of these revelations Edward was found guilty of treason and in November 1678 was hung, drawn and quartered. Now considered to be a Catholic martyr, Edward Colman was beatified by Pope Pius XI in 1929.

DNW’s Antiquities specialist, Nigel Mills, noted: “We were very pleased with a strong result at the auction today, the ring selling above top estimate to an American private collector, who was delighted to be the successful bidder.”

NEXT SALE: JEWELLERY, WATCHES AND OBJECTS OF VERTU – NOVEMBER 26, 2019