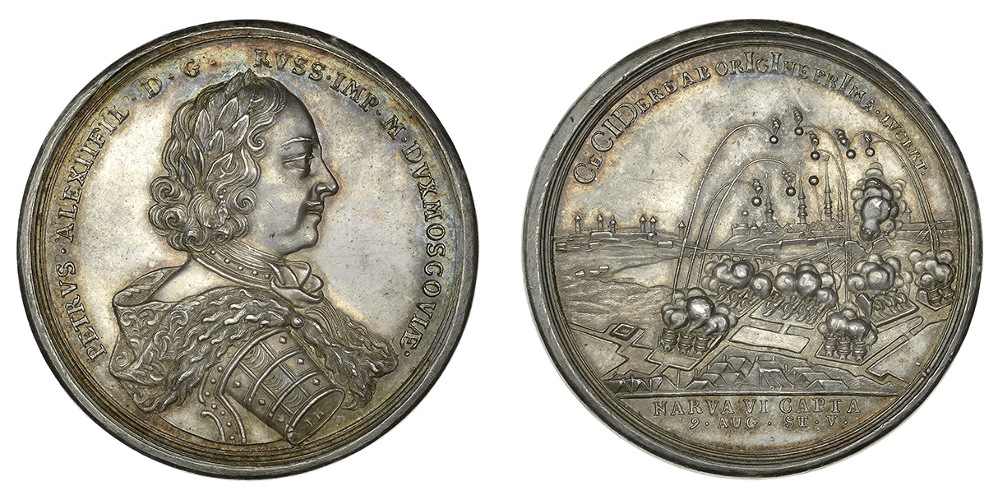 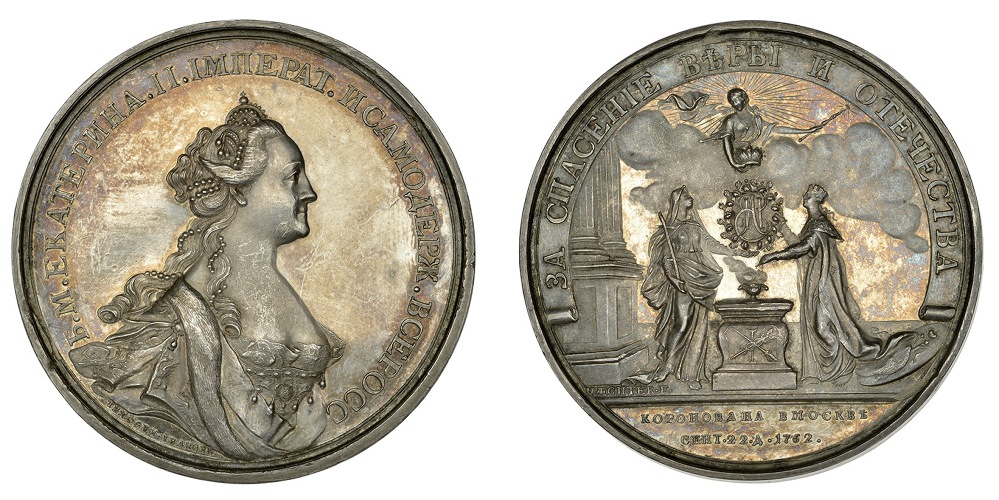 Dix Noonan Webb, the international coins, medals, banknotes and jewellery specialists will be holding their first auction devoted to Russian Coins and Historical Medals. The auction will be held on Tuesday, September 17, 2019 at 2pm at their auction rooms in central Mayfair - 16 Bolton St, London, W1J 8BQ.

The most important part of the sale is an old collection of Russian historical medals, mostly formed in the 1960s and 1970s.  Three highlights from this collection include an extremely fine and very rare silver medal from the reign of Tsar Peter the Great (1682-1725), dating from 1704 and commemorating the Capture of Narva, by I. Konstantinov. The medal, estimated at £3,000-4,000, portrays a uniformed laureate bust of Peter I on one side and a view of the bombardment of Narva on the other.

An extremely fine and very rare silver medal depicting the Coronation of Catherine the Great (1762-96) from 1762, by T. Ivanov and G.C. Waechter, showing a crowned bust of the Empress on one side and Russia and Faith standing at an altar, with Providence in the cloud above holding a crown and sceptre, on the other, is expected to fetch £3,000-£4,000.

Also of note is an extremely fine and extremely rare silver medal of Catherine the Great (1762-96), dating from 1771 by G.C. and J.G. Waechter. On one side of the medal is a portrait of the Empress, who was the country's longest-ruling female leader, while the other side shows Count Grigory Grigorievich Orlov on horseback with a view of Moscow in the background. Count Orlov led the coup which overthrew Catherine's husband Peter III and installed Catherine as empress. This medal is estimated at £9,000-£12,000.

The sale also contains nearly two hundred lots of coins, including a good selection of the medieval coins commonly known as ‘wire money’, and historical medals from other properties.

Tim Wilkes, Specialist in Charge, Coin Department, Dix Noonan Webb, commented: “We are very pleased to be holding our first auction devoted to Russian Coins and Medals dating from the 14th century to the 21st century. The coins and medals depict many of the significant figures and key historic moments in Russian history.”