An extremely rare Bank of Scotland, Limited Edition £5 dating from 17 July 2015 with the serial number PUDSEY05 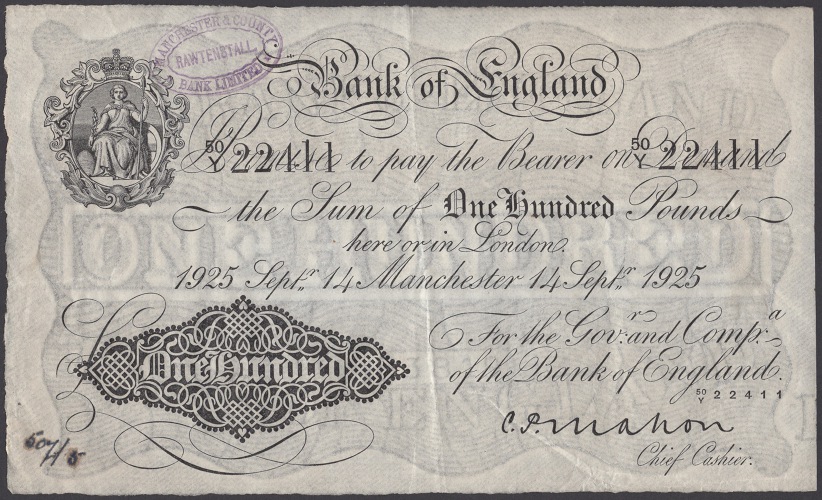 A very fine and lovely example of a £100 note from the Bank of England, stamped Manchester, 14 September, 1925

An extremely rare Bank of Scotland, Limited Edition £5 dating from 17 July 2015 with the serial number PUDSEY05 is expected to fetch £12,000-16,000 when it is offered for sale in an auction of British and Irish Banknotes at Dix Noonan Webb, the international coins, medals, banknotes and jewellery specialists. This auction – the first devoted to British and Irish Banknotes - will be held on Thursday, March 28, 2019 at 11am at their auction rooms in central Mayfair - 16 Bolton St, London, W1J 8BQ.

Only 50 of these notes were hand produced using a specially created design to celebrate the move to polymer and the Banks partnership with BBC Children in Need. It is being sold with its original presentation wallet and certificate of authenticity.

Andrew Pattison
Head of Department, Banknotes at Dix Noonan Webb, noted: “The Pudsey Bear notes were sold a few years ago for charity and a lot of people thought they were a bit of a gimmick, but since they are technically legal tender (despite there only being 50 of them in existence), anyone who collects Polymer Plastic Banknotes wants to own one.  As a result, prices have absolutely rocketed since the first auction.  This one, serial number 5, originally sold for only around £1,500, but is now worth almost ten times that amount.”

He also commented: “Bank of England notes at the time were mostly issued from the head office in London but several smaller branches in the UKs other large cities also issued limited numbers of banknotes.  Manchester was one of the larger issuers but nevertheless, a £100 from any of these branches from this early date is incredibly rare, particularly in this condition.”

He continued: “Regarding the bank stamp; Manchester and County Bank was one of the UKs last surviving ‘provincial banks’.  It was in business until 1935 when it was taken over by one of the precursors of NatWest.  This note was likely paid into the branch in Rawtenstall where it was stamped to show where it had been.”