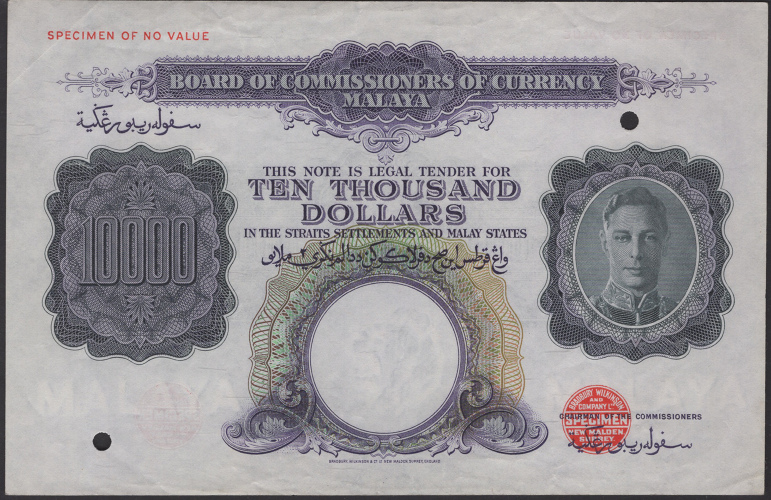 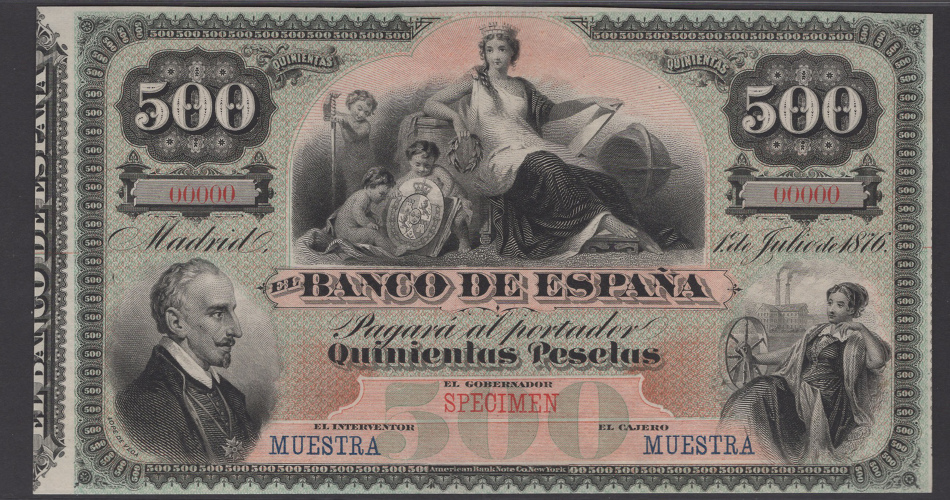 Rarities from around the world will be auctioned at the first sale held by the new stand-alone banknotes department at international specialists Dix Noonan Webb in London on 2 October 2018. They include a high denomination Malayan specimen note none of which are known to survive in issued form, a 19th century Spanish 500 Pesetas of which even the Bank of Spain does not have an example, and the only number 1 note of the first date of issue of the Irish Ploughman series known to be in private hands.

“We are delighted to be able to be offer such a fine selection of rare notes in our first sale,” said Andrew Pattison, head of the department, who joined Dix Noonan Webb with specialist Thomasina Smith at the beginning of July. Until now banknotes came under the umbrella of the coins department but Pattison and Smith have set up a new separate department working with DNW’s banknotes consultant Michael O’Grady, who continues in his previous role.

The star lot in the 2 October auction is the Board of Commissioners of Currency Malaya colour trial 10,000 Dollars note issued in 1942, which is estimated at £24,000 to £28,000. Such high denomination notes are known colloquially as ‘Titans’ and no issued examples are known. They were used for internal or interbank transfers as they were far too valuable to be carried around in someone’s pocket. This Malayan note has no serial number and is described in the auction catalogue as “an exceptional example of an extreme rarity and a classic design.”

The Banco de Espana specimen 500 Pesetas issued on 1 July 1876 is so rare that not even the Bank of Spain has one in its collection. The example to be offered by DNW is believed to be one of only two known and is the more complete of the two as it is printed on higher quality paper. The note, which has zero serial numbers, is expected to fetch £9,000 to £12,000.

Other highlights of the sale include an Iranian specimen 5,000 Rials with a previously unknown overprint intended to obscure the image of the Shah immediately after the 1979 revolution which overthrew him. This is expected to sell for £5,000 to £7,000. A rare 1942 specimen Iraqi 10 Dinars portraying King Faisal II as a baby is estimated at £5,500 to £6,500, while a set of eight proofs for the 1927 Hong Kong & Shanghai Banking Corporation 100 Dollars is thought to be unique and should fetch £3,000 to £4,000.

Dix Noonan Webb – from strength to strength since 1991

Two years later it opened a coins department which also auctions commemorative medals and tokens and in 2015 DNW added jewellery to its sales calendar. Now it has added a stand-alone banknotes department.