The Victoria Cross and other medals awarded to Corporal Sidney Day 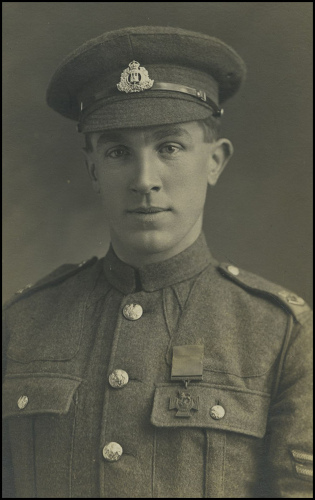 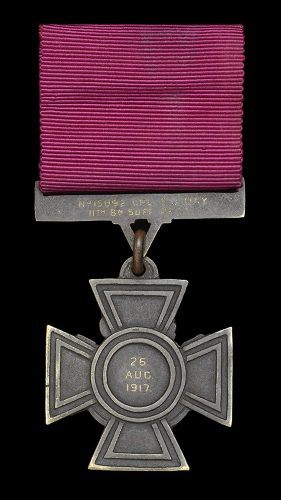 The reverse of Sidney Day's VC bearing his name 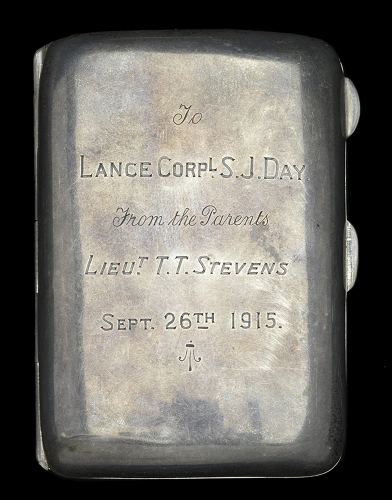 The Victoria Cross and other awards won by Corporal Sidney Day, one of the most extraordinary survivors of the First and Second World Wars, are to be auctioned by Dix Noonan Webb, the international coins, medals and jewellery specialists, in London on 28 February 2018. Norwich-born Day, who won his VC in 1917, was one of only two men of the Suffolk Regiment ever to be awarded Britain’s highest gallantry decoration, and later went to live in Portsmouth where he narrowly escaped death in the 1941 Blitz.

Day’s Victoria Cross, the three campaign medals that he was awarded for the First World War and two medals for the coronations of George VI and Elizabeth II are being sold by order of his family with an emotive archive of material. This includes a cigarette case given to him by the parents of a young officer whose life he unsuccessfully tried to save, a leather compass case which stopped a bullet that could have killed him and a Government document compensating him for the destruction of his home and business by German bombers. The lot is expected to fetch £120,000 to £140,000.

“Sidney Day’s survival in the First World War was nothing short of miraculous,” said Mark Quayle, medals specialist at Dix Noonan Webb. “He suffered five wounds, was saved from serious injury on two occasions when equipment and personal possessions deflected bullets and was twice forced to crawl back to British lines. He was eventually taken prisoner. His later plan to live a quiet life by opening a tea rooms in Portsmouth went somewhat awry when his business and home were destroyed by the Luftwaffe in the Second World War. Needless to say he survived the bombing.”

“However he was desperately unlucky not to have been rewarded with at least one other gallantry decoration during the First World War. He performed the most astonishing feats of bravery over a two-year period before he was eventually given a long-overdue Victoria Cross. Other men of his calibre emerged from the conflict with a row of gallantry awards.”

Sidney Day was born in Norwich in 1891, the youngest of nine children of William and Elizabeth Day. His father was a head cellar man at Morgan’s Brewery and later ran the Jolly Butcher’s public house in Norwich. Day was an apprentice butcher in Norwich before moving to Saxmundham, Suffolk. On the outbreak of the First World War he enlisted with the 9
th Battalion Suffolk Regiment, which was formed at Bury St Edmunds.

The 9th Battalion first saw action at the Battle of Loos in September 1915. During the attack Day saw that his commanding officer, Lieutenant Thomas Stevens, had been badly wounded and lifted him onto his shoulders to try to take him to safety. As he did so, they were spotted by a German sniper who shot the young officer dead. Day, wounded himself, took three days to get back to British lines by which time he had been given up for dead. Stevens’ parents were so grateful for his attempt to save their son’s life that they gave him an inscribed cigarette case, which is being auctioned with Day’s medals.
A year later in September 1916 Day was wounded four times as the 9th Suffolks attacked German lines during the Somme offensive. One bullet pierced his breast pocket just above his heart only to be deflected into his side by a packet of postcards and a small book in his pocket. Another struck him near the groin but became embedded in a leather compass case which is also in the lot to be sold by Dix Noonan Webb. Wounded and exhausted Day lay in a shell-hole from 7am until it grew dark when he crept three miles back to a dressing station.

After several months of recuperation and promotion to Corporal, Day returned to France where he transferred to the 11th Battalion Suffolk Regiment, originally raised in Cambridgeshire. On 26 August 1917 Day won his VC for heroics during the capture of a complex German trench system at Hargicourt. When the attack was threatened by an enemy machine gun, Day killed two of the crew and took the rest prisoner. He then went on alone to ‘bomb his way’ through the German trench system to link up with other British attacking parties. At one point a German stick grenade landed at his feet. Day seized it and threw it out of the trench – it exploded almost as soon as it left his hands. He pressed on, cleared the rest of the trench and, having consolidated the position, remained at his post under heavy shellfire until he was relieved 66 hours later.

Day was presented with his VC by George V at Buckingham Palace on 9 January 1918 and received a hero’s welcome when he returned to his home city of Norwich. A civic reception was held for him at Norwich Guildhall and a parade of the Church Lads’ Brigade, to which he had once belonged, took place in his honour in Lakenham. Day then returned to the front and was taken prisoner in April 1918, remaining a captive for the rest of the war.

After the First World War, Day initially struggled to find employment before retraining and working for the Norwich Electricity Department. He then decided to try pastures new and moved to Portsmouth where he and his wife opened the ‘Sidney Day VC Tea Rooms’ in The Arcade, off Edinburgh Road. His survival instinct was to save him one last time when his home and business were destroyed by a German air raid on 10 January 1941. Nearly 600 people were killed and injured in Portsmouth during that raid but Day walked away without a scratch. He subsequently found work as a messenger in the naval dockyards in Portsmouth. After years of declining health, partly the result of his old wounds, he died on 17 July 1959 and is buried in Milton Cemetery, Portsmouth. A stone commemorating Day in front of the Norwich War Memorial was dedicated on 26 August 2017 – exactly 100 years after the deeds that won him the Victoria Cross.