The George Cross, Lloyd's Medal for Bravery and other awards won by George Stronach 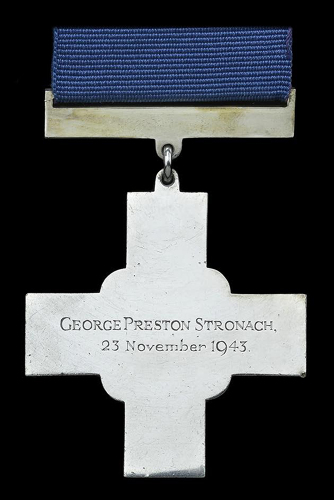 The reverse of Stronach's George Cross bearing his name 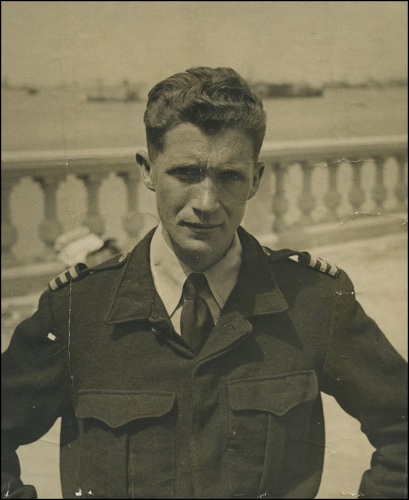 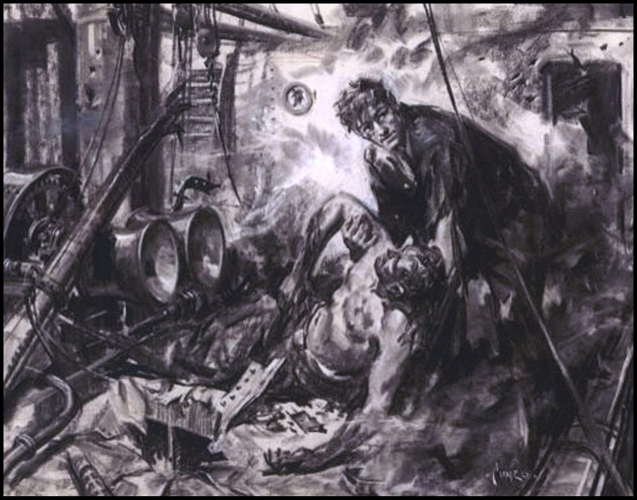 An artist's impression of Stronach winning the George Cross

A George Cross won by a Scotsman who became one of the Merchant Navy’s greatest heroes when he rescued comrades from a blazing cargo ship attacked by German aircraft in a North African harbour in 1943 is to be auctioned by Dix Noonan Webb, the international coins, medals and jewellery specialists, in London on 10 May 2017. The George Cross, the highest British gallantry decoration that can be won by someone not in the armed forces, and other medals awarded to Chief Officer George Stronach are expected to fetch up to £140,000.

Stronach rescued four comrades – one of who subsequently died from his injuries – amid the blazing hell of S.S.
Ocean Voyager, which was moored in Tripoli with thousands of tons of aviation fuel and ammunition aboard when it came under low level attack from the Luftwaffe. Despite being knocked temporarily unconscious by a massive explosion which killed the ship’s captain, he recovered and rescued survivors as the cargo exploded, only jumping overboard when he was sure that nobody was still alive on the ship. His George Cross is one of just three awarded to merchant seamen during the Second World War and the citation said that his gallantry “equals any in the annals of the Merchant Navy.”

“George Stronach was a quiet, reserved Scotsman who showed amazing calmness and courage as the ammunition below decks on Ocean Voyager began to explode,” said Pierce Noonan, a director of Dix Noonan Webb. “Realising that the ship itself was doomed, he set about rescuing as many of his injured shipmates as he could, putting their lives above his own survival. There have been few better examples of such unselfish heroism in the distinguished history of the George Cross.”

The decorations and medals are being offered for sale by George Stronach’s daughter, who lives in Scotland. She said: “I am extremely proud of my father, for he was a very fine man in every way. I think it could be said of him, as of so many others, that he was a ‘reluctant hero’. He never spoke about the the war although I know that he never forgot it or those of his ship who were lost during the bombing raid in Tripoli. Indeed, one of his greatest wishes was to have been able to visit the Commonwealth War Graves cemetery there in order to pay his respects to his shipmates. Sadly, this was never realised.

“With regard to the medals and archive being offered for sale, I have had the privilege of being the custodian of his awards since he passed them into my safe-keeping nearly 30 years ago. However, I feel that the time has now come for me to pass them on safely to a new owner. It is my sincere hope that whoever purchases this archive will honour all of it and display the items for the public to view and ponder on. Following the sale, it is my intention to give some of the proceeds to a charitable organization in his memory and I am currently looking into which would be the most suitable for this purpose.”

Stronach was born in the seaside hamlet of Port Gordon, near Lossiemouth on the Moray Firth in Scotland, on 4 December 1914. The son of a blacksmith who worked for a farmer, he was educated locally before securing a place at Gravesend Sea School in 1932. He joined the Merchant Navy and was regularly promoted becoming a Chief Officer in March 1941 and transferring to Ocean Voyager in August 1942. The ship was one of the vessels supplying the British Eighth Army as it fought its way westwards across North Africa. Tripoli was one of the Army’s major supply ports and in March 1943 Ocean Voyager arrived with a highly dangerous mix of 3000 tons of aviation fuel and almost the same tonnage of ammunition aboard. Three days later with only half the cargo unloaded, Tripoli’s port was attacked by German bombers and torpedo aircraft. Some of the planes flew so low that the blast from one of several bombs which struck Ocean Voyager caused one of the aircraft to hit the ship’s foremast and crash alongside in flames.

Stronach said later: “There were two direct hits through the bridge. I don’t quite know what happened then. I was thrown about 30 feet right out into the starboard scuppers. It was a few seconds before I realised that I was still alive. My left trouser leg had been torn off. My left eye and the whole of my left side seemed affected by the shock.” Ocean Voyager was on fire and, after failing to douse the flames and with the ammunition in the hold starting to explode, Stronach ordered the crew to abandon ship and went to look for survivors. He found one of the officers unconscious and badly burned and dragged him along the deck to a lowered lifeboat. Returning, he found another officer trapped by debris, freed him and pulled him through a porthole before lowering him down to the boat. As the situation became increasingly desperate, Stronach ordered a man to take the lifeboat to safety and went back again finding a third severely injured officer who he took to the side of the ship and lowered to a raft which had returned in response to his calls.

Taking a final look round, he found a greaser lying unconscious and, as there was no raft or boat alongside, threw him overboard. When he was finally satisfied that there were no more survivors on the ship, Stronach jumped overboard and swam to a raft which he directed back to pick up the greaser, who later died of his injuries. In total he had spent an hour and 20 minutes on board the blazing vessel looking for survivors knowing that the ship could blow up at any moment. The citation for his George Cross spoke of his “gallant efforts undertaken with utter disregard of his personal safety” and added “his action equals any in the annals of the Merchant Navy for great and unselfish heroism and determination in the face of overwhelming odds”.

Stronach not only received one of just three Second World War George Crosses to the Merchant Navy – the other two are in museums – but also the Lloyd’s War Medal for Bravery at Sea awarded by Lloyd’s of London. After a period in hospital recovering from a back injury sustained during the action, Stronach went back to sea before becoming a marine pilot on the Clyde. Retiring in 1979, he lived in Acharacle, Argyllshire, where he died on 12 December 1999. He is buried in the parish church in Acharacle.

Stronach’s decorations and medals consist of: George Cross, 1939-45 Star, Atlantic Star, Africa Star with clasp North Africa 1942-3, War Medal 1939-45, Elizabeth II Coronation Medal 1953, Elizabeth II Silver Jubilee Medal 1977, and the Lloyd’s War Medal for Bravery at Sea. They are accompanied by an archive of original material, including letters of gratitude from two of the men whose lives he saved. The lot is expected to fetch £120,000 to £140,000.