A 55 carat emerald and diamond set collar necklace is expected to fetch up to £10,000 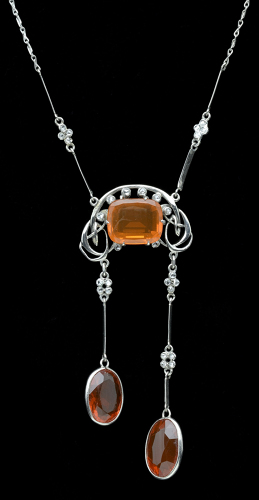 A fire opal set necklace attributed to Archibald Knox is estimated at up to £2,000

A late Victorian pink tourmaline, pearl and diamond pendant is estimated at up to £3,000 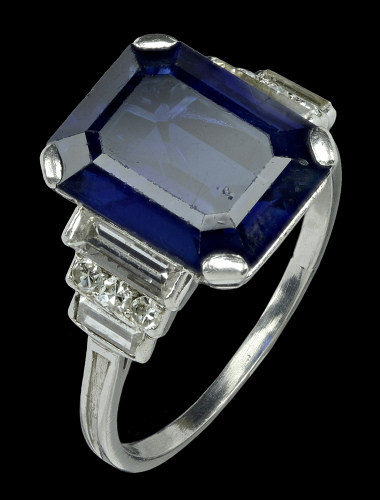 A stylish Art Deco sapphire and diamond ring is expected to sell for up to £5,000

A wide selection of jewellery styles and eras, ranging from a late Roman garnet ring through to a Harry Winston signature diamond ring, will be auctioned by Dix Noonan Webb, the international coins, medals and jewellery specialists, in London on 11 April 2017. “We are delighted to offer a broad range of high quality pieces, to suit everyone’s taste and pocket,” says Frances Noble, head of the Jewellery Department at DNW.

Highlights of the sale of
Jewellery, Watches and Objects of Vertu will include a pair of diamond drop pendent earrings with two principal diamonds weighing 2.51 and 2.31 carats expected to fetch £12,000 to £15,000, an impressive 18 carat gold mounted emerald and diamond collar necklace, centred with a large 55 carat sugar loaf emerald, estimated at £8,000 to £10,000, and a fine diamond line bracelet at £10,000-15,000.

The sale includes a rare Arts and Crafts fire opal pendant attributed to Archibald Knox, circa 1900-1904. Knox was the principal designer at Liberty & Co in London in the early 20th century, and this pendant, offered for sale with an estimate of £1600-2000, shows his typical entrelac style. His designs, steeped in the Celtic and Manx tradition from his upbringing on the Isle of Man, became market leaders for Liberty’s, contributing hugely to the store’s growing success, whilst the company insisted on a policy of anonymity for all its designers.

The sale includes attractive examples of antique jewellery, including a late Victorian tourmaline, pearl and diamond enamelled pendant, centred with a rectangular cushion-shaped mixed-cut pink tourmaline, and estimated at £2,000 to £3,000, and a stylish Art Deco sapphire and diamond ring, claw set with a rectangular step-cut sapphire between stepped diamond shoulders, expected to sell for £3,000 to £5,000.

The earliest piece in the auction is a late Roman/Byzantine intaglio set ring, the flat oval garnet intaglio carved with a standing figure, possibly Ceres, the goddess of agriculture, estimated at £600 to £800. By contrast, a Harry Winston single stone signature diamond ring is a strikingly modern piece, with its original retailer’s box and paperwork, and is expected to fetch £3,000 to £4,000.

Proving that the history of jewellery covers all sentiments, two further contrasting lots are a 1950s French gem-set novelty brooch by André Col of Paris, modelled as a stylized female mask with an angular face of polished smoky agate beneath a bobbed fringed haircut of woven-link chains, estimated at £2,000 to £3,000; compared to a 17th century fede and posy ring, featuring a pair of clasped hands holding a heart, the ring engraved with the earnest inscription ‘FEAR. GOD. ONLY’, and estimated at £600 to £800. From Fifties flippancy to 17th century sincerity – Dix Noonan Webb’s sale has it all.