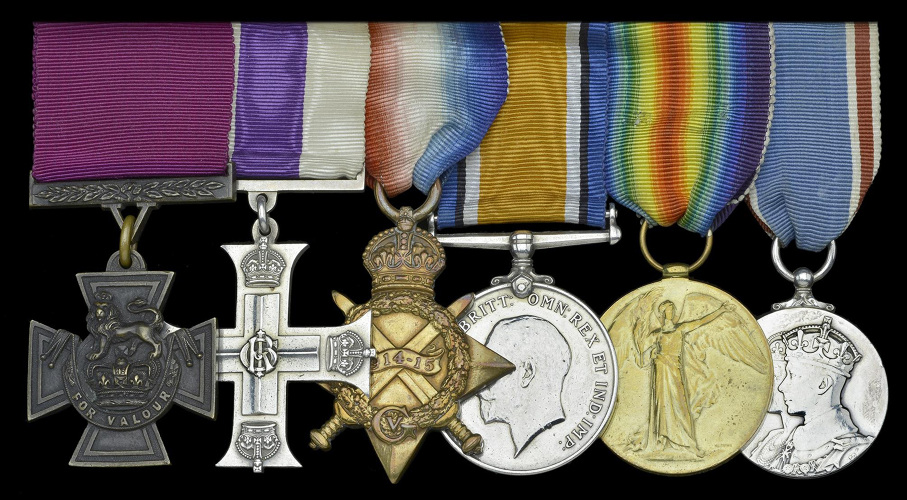 The Victoria Cross, Military Cross and other awards won by George Sanders. 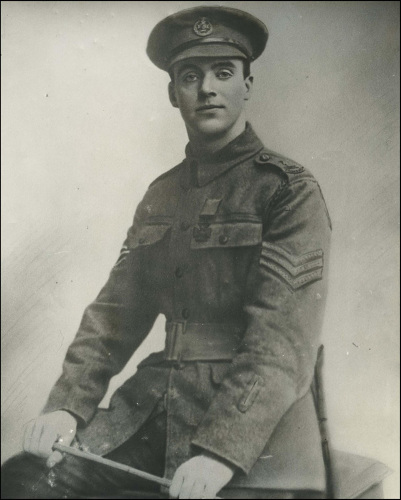 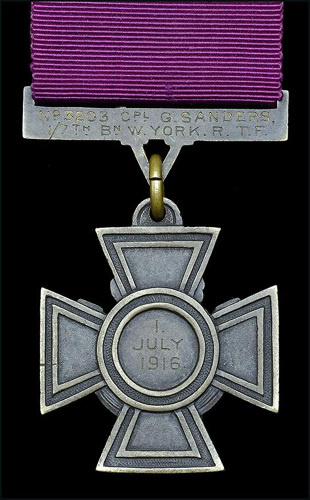 The reverse of the Victoria Cross dated 1 July 1916

The Victoria Cross and other awards won by Yorkshire hero George Sanders are to go on public display after being bought by the businessman Lord Ashcroft for £288,000 at an auction at Dix Noonan Webb, the international coins, medals and jewellery specialists, in London today (1 March 2017). Lord Ashcroft has the world’s largest collection of Victoria Crosses, which are displayed in a special gallery at the Imperial War Museum in London.

The decorations and medals had been expected to fetch between £180,000 and £220,000. Bidding began at £170,000 and quickly moved upwards until auctioneer Oliver Pepys brought his hammer down at £240,000. Once buyer’s commission was added to the hammer price the purchaser actually paid £288,000 for the Sanders awards.

“We are delighted that that this historic group of awards to George Sanders will be going on public display,” said a spokesman for Dix Noonan Webb. “The Ashcroft Collection is seen by huge numbers of visitors who come from all over the world to the Imperial War Museum. It means that the story of this gallant Yorkshireman will be preserved for posterity.”

Sanders won his VC during the horrific conditions of the first day of the Battle of the Somme in 1916. Sanders, who enlisted in the Leeds Rifles, his local Territorial Battalion, early in the First World War, took charge of an isolated party of men who were cut off as the British offensive on 1 July 1916 ground to a halt suffering more than 57,000 casualties, including 19,240 killed, in a single day. He and his band of 30 men fought off repeated German assaults despite having run out of food and water. Sanders was the first Leeds Territorial to win the VC and received a hero’s welcome when he returned to his home city.

Sanders, who was the youngest of seven children, was born on 8 July 1894 at New Wortley, Leeds. His mother Amy died when he was nine years old. He was educated at Little Holbeck School and was a choirboy at St John’s Church Leeds, before taking a job as a fitter’s apprentice at the Airedale Foundry in Leeds, which made railway locomotives.

He enlisted into the 1/7
th (Leeds Rifles) Territorial Force Battalion, West Yorkshire Regiment in November 1914 and went to France with this unit in April 1915. He was promoted to corporal and just over a year later the Leeds Territorials formed part of what the British hoped would be a decisive assault on 1 July 1916. The citation for his VC describes what happened to Sanders:

“After an advance into the enemy’s trenches, he found himself isolated with a party of thirty men. He organized his defences, detailed a bombing party and impressed on his men that his and their duty was to hold the position at all costs. Next morning, he drove off an attack by the enemy and rescued some prisoners who had fallen into their hands. Later, two strong bombing attacks were driven off. On the following day he was relieved after showing the greatest courage, determination and good leadership during thirty-six hours under very trying conditions. All the time his party was without food and water, having given all their water to the wounded during the first night. After the relieving force was firmly established, he brought his party, nineteen strong, back to our trenches.”

Sanders was one of nine men who won the VC on 1 July 1916 and one of only three to survive the war. Promoted to sergeant, Sanders was sent on leave to England where he received a hero’s welcome in Leeds on 14 November 1916 before going to Buckingham Palace the following day to receive his award from George V. His deeds were hailed in verse by Ben Norton, the Yorkshire poet, who wrote that he “brought credit to the ‘Yorkshires’ and the famous city of Leeds’.

Returning to the Western Front, he was commissioned as a 2nd Lieutenant in the West Yorkshire Regiment and promoted to Acting Captain in December 1917. He won the Military Cross for his bravery during an overwhelming German assault at Kemmel Hill in April 1918. He was last seen standing wounded on the top of a pill-box rallying his men and firing his revolver at the Germans at point-blank range. Somehow he survived and was taken prisoner.

After the war he worked on the staff of Meadow Lane Gasworks in Leeds and served in the Home Guard during the Second World War. He died aged 55 at St James’s Hospital, Leeds on 4 April 1950 following a long illness. He was given a full military funeral attended by four other holders of the VC. His own medals were carried by his former sergeant-major. Today he is commemorated on the Leeds VCs memorial.

His decorations and medals consist of: Victoria Cross, Military Cross, 1914-15 Star, British War Medal, Victory Medal and George VI Coronation Medal. They were sold, together with an archive of original documents and photographs, by his descendants.