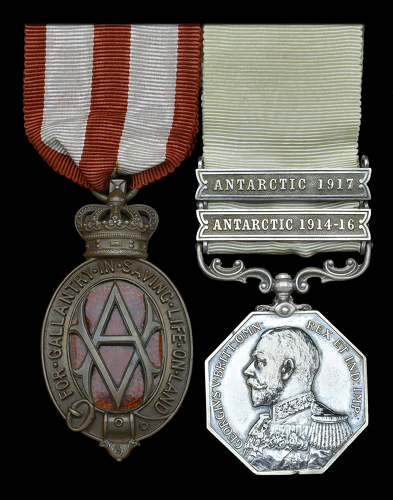 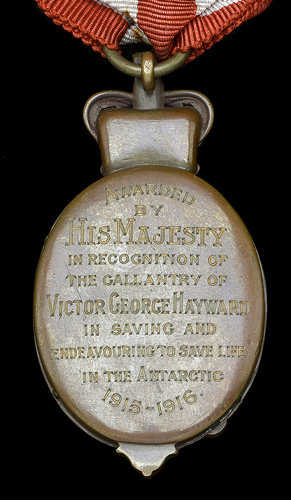 The reverse of Hayward's Albert Medal 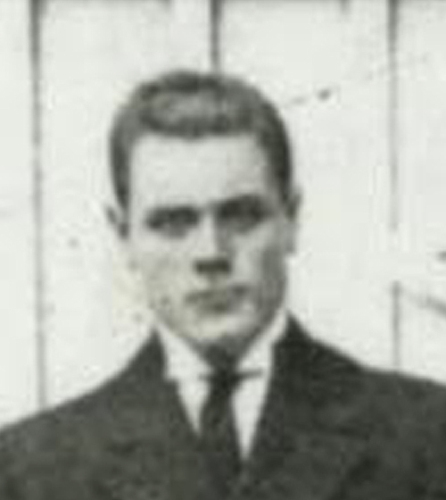 An extremely rare posthumous Albert Medal for Gallantry awarded for the epic Shackleton Trans-Antarctic Expedition a century ago is to be auctioned by Dix Noonan Webb, the international coins, medals and jewellery specialists, in London on 8 December 2016. The Albert Medal – a forerunner of the George Cross – won by Victor Hayward for saving the life of comrades together with his Polar Medal are expected to fetch up to £60,000 at the sale of Orders, Decorations, Medals and Militaria.

Hayward, a Londoner who had signed on as a store keeper and dog handler for Shackleton’s famous expedition, did not live to receive either of his medals because he and an officer whose life he had previously helped to save fell though the ice and vanished in May 1916. His story remains a classic of raw courage amid the freezing wastes of the Antarctic.

“The Polar explorers of the early 20
th century were an extraordinary breed, prepared to put their lives on the line by venturing into one of the most dangerous places on earth,” says Mark Quayle, a medals expert at Dix Noonan Webb. “Hayward was one of the bravest of them, a man who worked tirelessly to try to save the lives of his comrades whilst at times barely able to walk because of illness. He always put others before himself and never flinched from his duty.”

Hayward, who was born in 1888, was an accounts clerk in the City of London before going to work on a ranch in Canada and then volunteering for Sir Ernest Shackleton’s Imperial Trans-Antarctic Expedition in 1914. He joined the crew of the Aurora, which was tasked with establishing a chain of supply depots which could be used by the main Trans-Antarctic party.

However in May 1915 the Aurora was blown out to sea during a blizzard and drifted away leaving a bewildered shore party, including Hayward, stranded. The ship was unable to come back to get them because of the worsening Antarctic winter and the nine men were short of stores and equipment. In particular they lacked the clothing and gear needed for sledging and did not have all the stores required to establish the supply depots.

In this dire situation Hayward quickly became essential as the handyman and was also in charge of obtaining seal blubber, which could be used for food and fuel. Despite their predicament, the group decided to press ahead with establishing the depots with the supplies that they did have. What followed was a nightmare round trip of almost 1,000 miles taking more than five months amid appalling conditions. Despite developing scurvy due to poor diet during the trip, Hayward worked constantly to try to save the lives of his comrades, in particular Sub-Lieutenant A.L.Mackintosh, who survived the journey, and the chaplain the Reverend A.P. Spencer-Smith, who did not. These two collapsed and had to be dragged on sledges, slowing the party’s progress to just two or three miles in a 15 hours day.

Having helped save Mackintosh’s life, Hayward then died alongside him. After making it back to their base, the two men set off on a risky reconnaissance towards Cape Evans, where another group from the expedition was based. They vanished and a search party followed their footsteps for two miles before they ended abruptly at a stretch of water only thinly covered with ice. They had clearly plunged through the ice to their deaths. The rest of their party were rescued in January 1917.