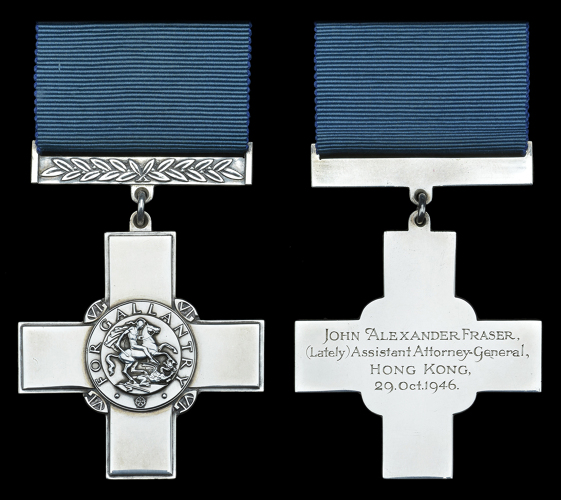 The posthumous George Cross awarded to John Fraser is expected to fetch up to £150,000 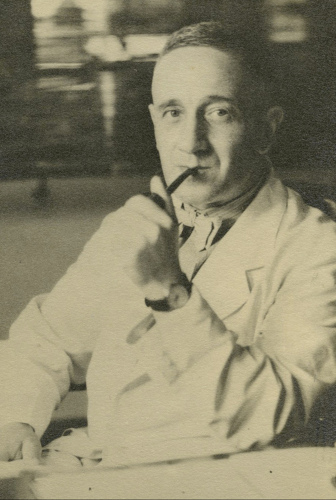 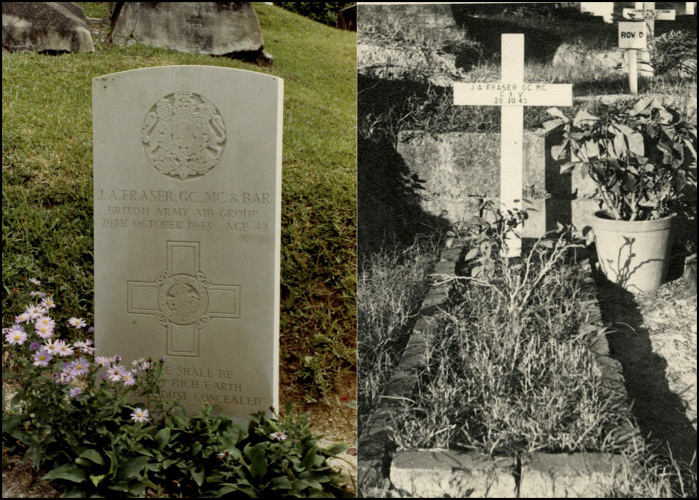 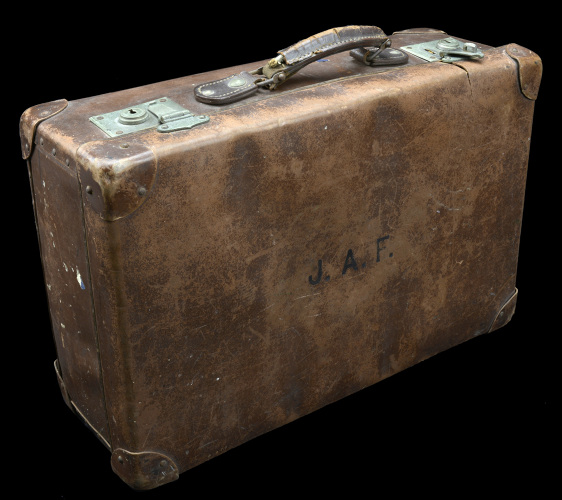 The battered suitcase that was returned to Fraser's widow Kathleen

A posthumous George Cross awarded to a British civilian who was beheaded by the Japanese after refusing to betray fellow prisoners despite prolonged torture is expected to fetch up to £150,000 at an auction at Dix Noonan Webb, the international coins, medals and jewellery specialists, in London on 22 July 2016. The decoration presented to John Fraser’s widow three years after his murder in Hong Kong is arguably one of the most important and poignant gallantry awards of the Second World War.

Fraser, a Scotsman born and educated in Edinburgh, was a civil servant who joined the government in Hong Kong in 1919 and by the time of the Japanese invasion in December 1941 had risen to become Civilian Defence Secretary and a member of the Executive Council in the British colony. Following the fall of Hong Kong, he was incarcerated in the Civil Internment Camp at Stanley and for the first few months was the senior British government representative there.

He immediately organized escape plans and a clandestine wireless service and was successful not only in receiving news from outside but also in getting important information out of the camp. As a senior British official he was fully aware of who among his fellow captives was involved in these activities. He was equally aware of the consequences that he would suffer if he was caught. Eventually he was arrested and subjected to prolonged and severe torture by the Japanese who were determined to obtain information from him and, in particular, to implicate all those in the camp who had been involved in clandestine activities. The citation for his George Cross states: “Under this treatment he steadfastly refused to utter one word that could help the Japanese investigations or bring punishments to others. His fortitude under the most severe torture was such that it was commented on by the Japanese prison guards”

George Wright-Nooth, a Hong Kong police officer, who was involved in smuggling food and messages in and out of the camp and knew where one of the illegal radio sets was, wrote later that he was saved from certain execution by Fraser’s incredible courage. “He was a small, somewhat mild-looking civil servant of 47 called John Fraser,” wrote Wright-Nooth in his memoirs. “He went to his death crippled by torture and beatings, his body emaciated and bent, virtually unrecognisable as the man he had once been. His was the triumph of the spirit over physical torment.”

After a farcical show trial at which they were neither represented nor allowed to speak in their own defence, Fraser and 31 other prisoners – including one woman – were sentenced to death. They were roped together in groups of three with their hands tied behind their backs and driven the short distance to the execution site. There they were lined up in single file, blindfolded and beheaded one by one. Not all died immediately and their bodies were thrown into a pit. That night Japanese officers, some of whom had been present at the executions, staged a drunken party in their quarters, laughing and playing music.

On the day of his murder, Fraser wrote to his wife Kathleen, who had been evacuated from Hong Kong with their sons Tom and Ian before the Japanese attack. “This is my last letter,” he wrote. “Remember the only thing I cared about was you and the boys. Everything else gave way to that.” The letter was discovered, with the rest of his effects, in a battered suitcase that was returned to Kathleen after the war. The suitcase and a copy of the letter are included in the lot to be auctioned.

“Such was the appalling nature of his injuries and suffering that pre-war acquaintances – fellow captives – were on occasion unable to recognise him,” says David Erskine-Hill, auctioneer at Dix Noonan Webb. “Yet his indomitable spirit triumphed over the wanton cruelty of his captors for he uttered not a word that would assist them in making further arrests. Following another severe beating on the morning of his trial, he faced his persecutors in a display of courageous defiance that was an inspiration to all.”

Fraser was born in Edinburgh on 12 February 1896, the son of Thomas Fraser, a mercantile clerk, and his wife Mary. Educated at the Trinity Academy and Edinburgh University, he was commissioned into the Royal Scots Fusiliers after the outbreak of the First World War. He transferred to the Machine Gun Corps in 1916 and won the Military Cross and Bar serving with that Corps in France so proving his gallantry long before the events that brought him a posthumous George Cross.

The latter was presented to Kathleen Fraser by George VI at Buckingham Palace on 27 November 1946. It is being sold by Fraser’s grandchildren at Dix Noonan Webb, where it is expected to fetch £120,000 to £150,000. The lot will include an archive of letters, photographs and newspaper cuttings all contained in his leather suitcase.