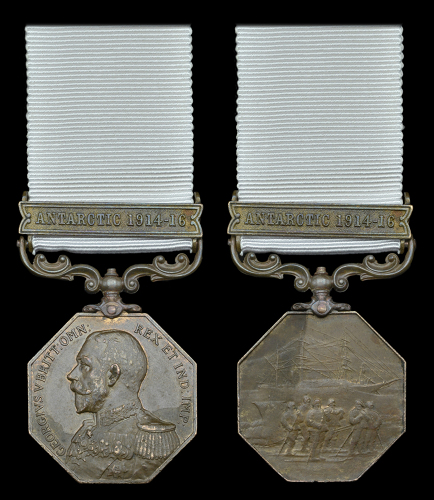 The Polar Medal awarded to Timothy McCarthy is expected to fetch up to £20,000 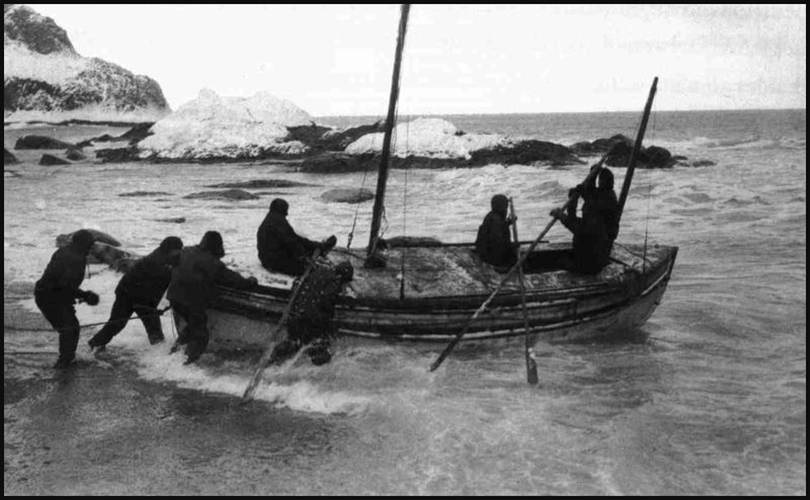 Launching the James Caird from Elephant Island on 24 April 1916

A historically important Polar Medal awarded to a heroic Irish sailor who was one of five men chosen by the explorer Sir Ernest Shackleton to accompany him on what is arguably the greatest open-boat journey of all time is to be auctioned by Dix Noonan Webb, the international coins, medals and jewellery specialists, in London on 22 July 2016. The unique bronze medal awarded to Able Seaman Timothy McCarthy, Royal Naval Reserve, for the epic 800 miles journey across the stormy sub-Antarctic Ocean is expected to fetch £15,000 to £20,000 at the sale of orders, decorations, medals and militaria.

McCarthy, from Kinsale, County Cork, sailed with Shackleton in the 20ft long boat
James Caird for 16 days from Elephant Island to South Georgia in 1916 to get help for the rest of their shipmates from the Polar exploration vessel Endurance, who were stranded and running out of food in Antarctica. Shackleton and his crew of five put their own lives in imminent danger to save their comrades from a lingering death. It remains one of the greatest maritime stories in history.

Shackleton later paid tribute to the Irishman in his memoirs writing: “McCarthy, the best and most efficient of sailors, always cheerful under the most trying circumstances and who for these reasons I chose to accompany me on the boat journey to South Georgia.” But tragically McCarthy, who had survived the perils of the southern ocean, was thrust into wartime service immediately he returned to Britain and was killed when his ship was sunk by a German submarine in 1917. He never lived to see his hard-earned Polar Medal.

“McCarthy was indomitable, a true hero and just the sort of man needed for a hazardous mission such as the voyage of the James Caird,” says Pierce Noonan, a director of Dix Noonan Webb. “When handing over the tiller he always joked that it was ‘a fine day’ as the wind howled and the waves crashed around them. His natural optimism shone like a beacon throughout the voyage. Today his Polar Medal acts as a memorial to a sailor who survived Shackleton’s expedition but not the slaughter of the First World War.”

McCarthy’s medal with the clasp ‘Antarctic 1914-16’ is the only bronze Polar Medal awarded for Shackleton’s voyage in the James Caird. Shackleton himself and two men received the silver version of the medal, while two other crewmen were not recommended for any award. The McCarthy medal was in the possession of an Irish collector who is now deceased and has never been on the open market before.

Born in County Cork in 1885, McCarthy was an Able Seaman in the Royal Naval Reserve when he applied to join Shackleton’s Antarctic expedition in 1914. He was one of just 26 men selected to crew the expedition’s vessel Endurance. The aim was to cross the Antarctic continent, a journey of 1,800 miles, and the expedition was given permission to set sail in August 1914 despite the outbreak of the First World War. However by January 1915 Endurance was held up by solid pack ice in the Weddell Sea and in October of that year the ship, damaged by the pressure of the ice, was abandoned and later sank.

The crew established camp on an ice flow and in April 1916 embarked on a hazardous five days journey to Elephant Island in the James Caird and two other ship’s boats. Once there it was clear that rescue would have to be sought because food supplies and the men’s morale were both dwindling. Shackleton decided to undertake a dangerous 800 miles journey across one of the most tempestuous areas of water in the world to South Georgia, where he knew there were whaling stations. He selected McCarthy and four others and set off on 24 April 1916.

“The tale of the next 16 days is one of supreme strife amid heaving waters for the sub-Antarctic Ocean fully lived up to its evil winter reputation,” Shackleton later wrote. “Cramped in our narrow quarters and continually wet from the spray, we suffered severely from cold throughout the journey. We fought the seas and winds and at the same time had a daily struggle to keep ourselves alive.”

One of the crew, Frank Worsley, later recorded that when McCarthy had finished his time on watch at the tiller, he always displayed his “cheerful optimism and his habit of handing over the helm with ‘it’s a fine day, sorr’.” After surviving a massive wave which threatened to overwhelm the James Caird, they reached South Georgia on 10 May 1916. Shackleton and two others set off to find the whaling stations, while McCarthy stayed behind to look after the other two crew members, who were in a weak condition. Both they and the rest of the crew of Endurance left behind on Elephant Island were subsequently rescued.

McCarthy was sent back to Britain with Shackleton’s warm expressions of gratitude but the authorities there showed little sympathy for his ordeal and almost immediately thrust him into service aboard the armed oil tanker S.S. Narragansett. The ship was torpedoed and sunk off the south-west coast of McCarthy’s native Ireland on 16 March 1917 and he was one of 46 sailors who lost their lives. Shackleton later praised McCarthy saying that he was “killed at his gun”.

Tragically McCarthy never lived to see his Polar Medal and his First World War medals were never claimed or issued. He has no known grave and is commemorated on the Plymouth Naval Memorial. A joint bust of McCarthy and his brother Morty, also an Antarctic explorer, was unveiled in Kinsale in September 2000.