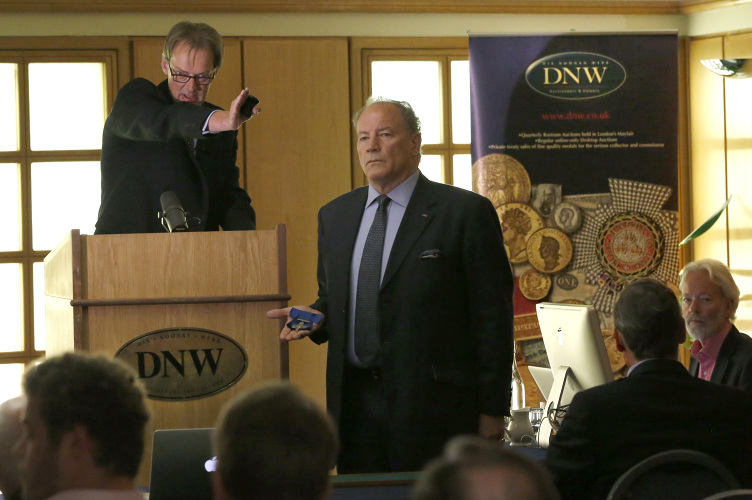 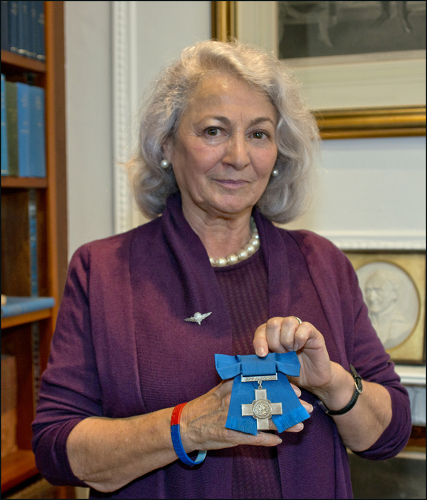 Tania Szabo with the George Cross awarded to her mother Violette

The world-famous George Cross awarded to the Special Operations Executive secret agent Violette Szabό – one of only four GCs to women – fetched a record price of £312,000 (£260,000 hammer price) at Dix Noonan Webb, the international coins and medals specialists, in London today (Wednesday 22 July).
The George Cross and other medals awarded to Violette were bought, along with a unique archive of photographs and documents, by Lord Ashcroft, the British peer who owns the world’s largest collection of Victoria Crosses and George Crosses. The medals will go on public display in the Lord Ashcroft Gallery at the Imperial War Museum in London.

Michael Naxton, Curator of the Lord Ashcroft Collection, who bid for the Szabό medals and archive at the Dix Noonan Webb auction, said afterwards: “We are delighted to have acquired all of this for the collection. They will go on display in the Lord Ashcroft Gallery very shortly.”

Tania Szabό, Violette’s daughter, who sold the George Cross and related items to secure their future custodianship and her own financial security, said: “This is a very happy outcome. I am so pleased that all this material relating to Violette will stay in Britain and will be on public display. The many people who will visit the Imperial War Museum in the years to come will be able to see for themselves the story of her heroism.”

David Erskine-Hill of Dix Noonan Webb, the auctioneer at the sale, said: “We are delighted for Tania Szabό. This is a fully justified world record price for a George Cross which reflects the extraordinary story and legacy of Violette Szabό.”

The George Cross was sold with Violette’s three Second World War campaign medals and the Croix de Guerre that she was awarded by the French for her gallantry. The medals and archive constitute one of the most important such collections ever to have been offered for sale in Britain.

Such is Violette’s fame that she has been the subject of three biographies and a 1958 film
Carve Her Name With Pride starring Virginia McKenna, who attended the auction today with Tania Szabό.

Violette was born in Paris in 1921, the daughter of a British father and a French mother. The family moved back to England but Violette spent time in both countries during the inter-war years going to school in Stockwell, south London and later working in a department store in Brixton. In 1940 she met Etienne Szabό, a dashing French Foreign Legionnaire, in London, and after a whirlwind romance they married. Etienne was killed at El Alamein in 1942 without ever having seen his daughter. Violette decided that she wanted to avenge her husband’s death.

Her fluent French and evident courage made her a candidate for the Special Operations Executive, which carried out espionage, sabotage and reconnaissance and helped resistance movements in occupied Europe during the Second World War. Her first mission to France in April 1944 was successful but she was captured shortly after landing behind German lines again in June that year. After conducting a fighting retreat firing her Sten gun, she was only taken prisoner after she ran out of ammunition.

In the months that followed, she underwent terrible torture but remained typically defiant She was murdered by the Germans with a shot to the back of the neck at the Ravensbrück concentration camp in late January or early February 1945. In December 1946 the award of the George Cross to Violette Szabό was announced and the following month four year-old Tania was personally presented with the Cross by George VI at Buckingham Palace