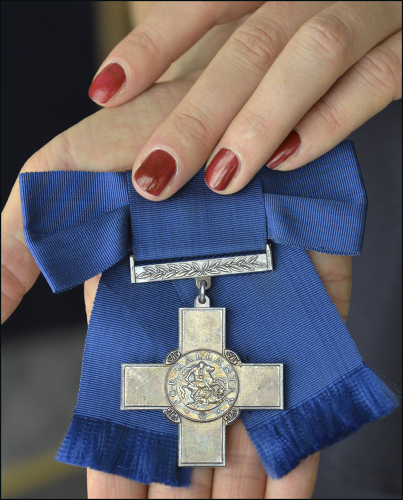 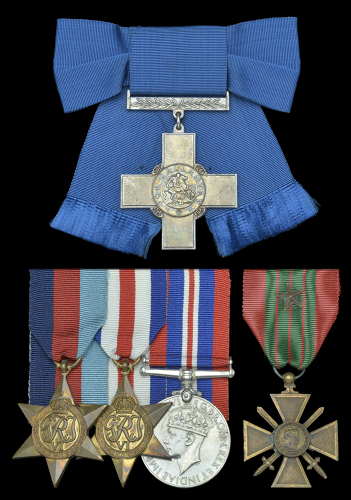 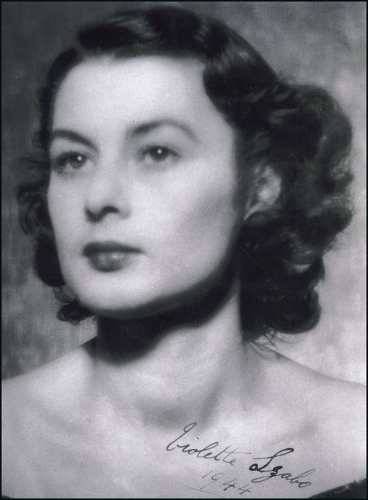 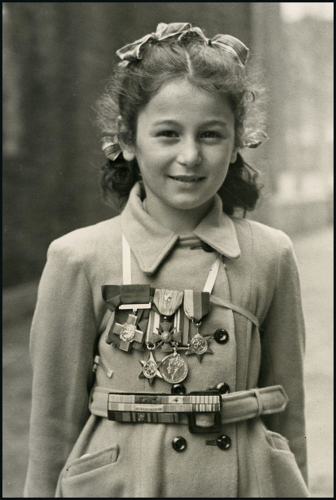 The world-famous George Cross awarded to the Special Operations Executive secret agent Violette Szabό – one of only four direct GC awards made to women and one of the most celebrated gallantry decorations of the Second World War immortalized in books and film – is to be auctioned by Dix Noonan Webb, the international coins and medals specialists, in London on 22 July 2015. The GC and Violette’s other medals are being sold together with a unique archive of documents and photographs, some previously unseen, by her daughter Tania Szabό, who has campaigned tirelessly to preserve her mother’s memory. They are expected to fetch £250,000 to £300,000.


“After many years of actively supporting the legacy of my gallant mother, I have reached a point in my life where I need to make a difficult decision in respect of the future of her medals,” says Tania Szabό. “I have no children and therefore the ongoing custodianship of Violette’s medals needs to be addressed. Moreover, I have my own future security to consider. Therefore, after examining the options, I decided to place her awards in auction. I do so with some regret but it is a decision derived from much careful thought and I have every confidence that the successful purchaser will cherish - and take great care of - them.”

David Erskine-Hill, auctioneer at Dix Noonan Webb, says: “It is well known that in 1956 the Conservative MP Dame Irene Ward mounted an unsuccessful campaign to have Violette’s GC exchanged to a Victoria Cross. It was no doubt a well-intended initiative. In truth, however, Violette’s magnificent exploits and example transcended such debate. Her award stands at the pinnacle of such distinctions and her legacy yet higher. As a consequence, her story has reached an admiring international audience, for it is a story of a brave and beautiful woman, in fact a very special human being, who in reality conquered her foes by an example of stoicism that remains an inspiration to this day.”

The George Cross will be sold with Violette’s three Second World War campaign medals and the Croix de Guerre that she was awarded by the French for her gallantry. It will also include the original parachute badge which her parents discovered after she had dropped it and then realised the true dangerous nature of her work. The medals and archive constitute one of the most important collections ever to have been offered for sale in Britain.

The George Cross is Britain’s highest gallantry award for actions for which purely military honours would not be granted. Although a number of women were given George Crosses in exchange for their existing gallantry awards when superseded by the GC, only four have received the Cross directly since its inception in 1940. Three of them, Violette Szabό, Odette Sansom and Noor Inayat Khan, were members of the highly secret Special Operations Executive (S.O.E.), which carried out espionage, sabotage and reconnaissance and helped resistance movements in occupied Europe during the Second World War. The fourth was Barbara Harrison, an air stewardess who died as a result of gallant rescue work at Heathrow Airport in 1968. Sansom’s GC is in the Imperial War Museum, while Harrison’s is owned by British Airways, leaving just two potentially for sale.

It is a measure of Violette’s standing within even this illustrious quartet of women that Odette Sansom said later: “She was the bravest of us all” Such is Violette’s fame that she has been the subject of three biographies - Carve Her Name With Pride, by R. J. Minney (1956), Violette Szabo - The Life That I Have, by Susan Ottaway (2002), and Young, Brave and Beautiful, by Tania Szabó (2007 and a second edition about to be published) – and a 1958 film also called Carve Her Name With Pride starring Virginia McKenna. Her life, whirlwind wartime romance with Etienne Szabό and death are the subject of continuing study and media fascination and have even inspired a video game.

Violette was born in Paris in 1921, her parents being Charles George Bushell, a British First World War veteran, and his French wife Reine. The family moved back to England but Violette spent time in both countries during the inter-war years going to school in Stockwell, south London and later working in a department store in Brixton. In 1940 she met Etienne Szabό, a dashing French Foreign Legionnaire, in London, and after a whirlwind romance they married six weeks later. After he was sent overseas, she joined the Auxiliary Territorial Service and was posted to an anti-aircraft battery. Released from her A.T.S. duties because she was pregnant, Violette returned to London where Tania was born in June 1942. In October that year Etienne died of his wounds at El Alamein in North Africa without ever having seen his daughter. Violette decided that she wanted to avenge her husband’s death.

Her fluent French and evident courage made her a candidate for the Special Operations Executive and, after undergoing gruelling training, she set off on her first mission to France in April 1944. Her task was to travel alone to Rouen and Le Havre to establish the fate of a resistance group thought to have been infiltrated by the Germans. Over the next fortnight, working under incredibly dangerous conditions, Violette established that 96 members of the resistance had been arrested and gathered valuable information about factories. She was arrested twice but her cover story held. With typical aplomb she embarked on a shopping spree in Paris before returning to England with both the information and her new clothes – including a dress she had bought for Tania.

On 8 June 1944 – two days after the D-Day landings and Tania’s second birthday – she parachuted back into France on another mission. Two days later the car she was travelling in ran into a German roadblock near Limoges. Told to run for it by her companion, she instead conducted a fighting retreat firing her Sten gun. Eventually, wounded, she told him to leave and carried on fighting, with only an apple tree for cover, until she ran out of ammunition and was captured. She spat in the face of an SS officer who offered her a cigarette.

In the months that followed, she underwent terrible torture but remained typically defiant and carved her name on the wall of one prison cell. On one occasion whilst on a prison train being attacked by Allied aircraft, she crawled along a corridor to fellow prisoners with a jug of water. On another at the Ravensbrück concentration camp she danced and sang ‘The Lambeth Walk’ to the fury of her SS guards. It was at Ravensbrück that she was murdered by the Germans with a shot to the back of the neck in late January or early February 1945.

In December 1946 the award of the George Cross to Violette Szabό was announced and the following month four year-old Tania, wearing the dress that her mother had purchased in Paris on her first mission, attended a private investiture by George VI at Buckingham Palace. Tania recalls: “I curtsied as I knew so well how to do. And he [the King] leant forward and pinned the George Cross onto my right hand side, saying that as my mother’s representative I must always wear it on my right-hand side.”

Tania continues: “Her life was short but lived to the full, with much happiness, joy, some deep sadness and great endeavour ... What a great old lady she would have made, what a contribution she would have given and what wisdom and fun she would have passed our way. She and all those other brave souls who gave their life for our fragile liberties would urge us most strenuously to be ever vigilant and strive to remain free. Lest we forget.”