Up to £180,000 expected for the Victoria Cross of North West Frontier hero praised by Churchill 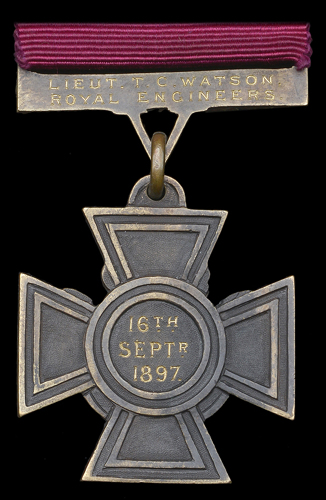 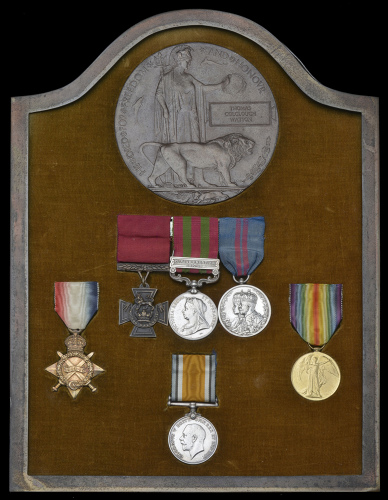 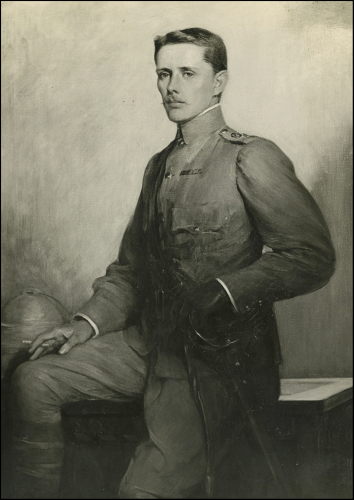 A hero to Winston Churchill, the Victoria Cross and other medals awarded to Lieutenant Colonel Thomas Watson of the Royal Engineers will come to auction at Dix Noonan Webb in London on 11 December 2014.

Watson, then a Lieutenant, won his VC for a classic piece of North West Frontier heroism in 1897, which was highly praised by Churchill, who rode in with the column that relieved him and his comrades. The awards, which are being sold by descendants, are expected to fetch £150,000 to £180,000 in DNW's Orders, Decorations, Medals and Militaria auction.

In September 1897 Watson and a few men from The Buffs (East Kent Regiment) and the Bengal Sappers & Miners, attempted to take refuge in the village of Bilot in the Mahmund Valley after the British forces left it late in the day to withdraw to their base following an operation against tribesmen. Unfortunately the latter had beaten them to the village and a bitter fight ensued.

Watson went forward with charges and destroyed the main tower in Bilot. After this success he and another officer led their men in repeated attempts to drive the enemy out of the village at the point of the bayonet. The citation for his VC, published in The London Gazette on 20 May 1898, outlined how he led his men “into the dark and burning village to dislodge some of the enemy who were inflicting loss on our troops.” It continued: “After being wounded and driven back, he made a second attempt to clear the village and only desisted after a second repulse and being again hit and severely wounded.” Watson suffered a wound to the thigh, a shattered left hand and considerable loss of blood from a ruptured artery.

The small group hung onto their perilous position until they were relieved at dawn by a column accompanied by Winston Churchill, then a war correspondent, who later praised Watson in his book The Malakand Field Force. Churchill wrote: “The attention of the reader is directed to the bravery of this officer. After a long day of marching and fighting, in the dark, without food and with small numbers, the man who will go on, unshaken and unflinching, after he has received a severe and painful wound, has in respect of personal courage few equals and no superior in the world.”

Watson himself made light of his wounds in a letter to his wife Edith, perhaps hoping to reassure her. “I got touched on the right leg, only a graze, but one of the Buffs was badly hit so I went back to get some Sappers,” he wrote. “I hurried back and was pointing out where the devils were sneaking up when I got a slight flesh wound in the inside of the right arm – nothing of consequence but unfortunately almost immediately afterwards I got badly hit on the left hand. I asked the Buffs to hang on till I could get another officer.”

David Erskine-Hill, medals specialist at DNW, says: “This a classic example of supreme bravery by a British officer amid the harsh and unforgiving surroundings of the North West Frontier. The courage that it must have taken to advance into a village held by hostile tribesmen at night and to carry on fighting after being wounded is almost beyond belief. Such men were a very special breed.”

Watson also served in the First World War but was invalided home with an illness from which he died in London in June 1917. His group of medals consists of the Victoria Cross, the India Medal 1895-1902 with clasp Punjab Frontier 1897-98, 1914-15 Star, British War and Victory Medals and Delhi Durbar Medal 1911 together with the Memorial Plaque sent to his widow.

The awards of Watson’s wife Edith, whose maiden name was Welchman, will be auctioned separately in the same sale. They consist of the Royal Red Cross 1st Class, the India General Service Medal 1854-95 with clasp Hazara 1888 and a British Red Cross Society Medal 1914-18. The group is estimated at £4,000 to £5,000. The Watsons were one of only two couples to hold the VC and the RRC respectively – the other was Field Marshal Lord Roberts and his wife.