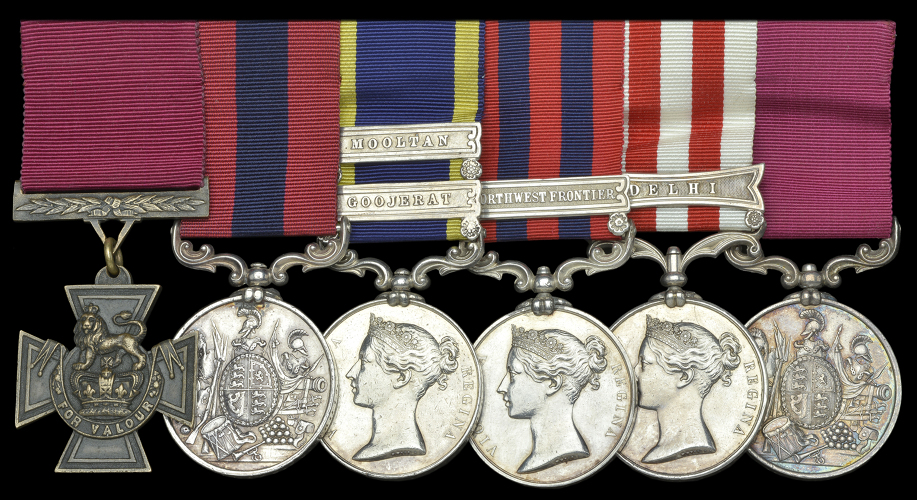 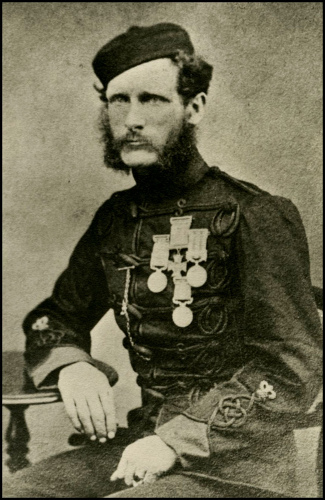 The unique Victoria Cross and Distinguished Conduct Medal group of awards to Sergeant-Major Stephen Garvin, 1/60th Rifles, the most highly decorated non-commissioned British soldier to emerge from the Indian Mutiny, is to be auctioned by Dix Noonan Webb, the international coins and medals specialists, in London on 19 September 2014. The group of six gallantry, campaign and long service medals is expected to fetch £120,000 to £140,000. It is being sold by a private collector.

Garvin was not only one of the Victorian era’s greatest heroes but also one of the first Irishmen to be awarded the Victoria Cross. He won his VC on 23 June 1857 during the siege of Delhi, little more than a year after Britain’s highest gallantry award had been instituted, and was personally presented with it by Queen Victoria.

Garvin, then a Colour-Sergeant in the 60
th Rifles, was one of a small group of men who volunteered to storm a building known as the “Sammy House” from which mutineer sharpshooters were harassing British troops. The assault looked like a classic “forlorn hope” but such was the ferocity with which Garvin and a dozen others attacked under heavy fire that it was a total success. Few of the mutineers survived what the London Gazette of 20 January 1860, with considerable understatement, called “a sharp contest”. It was in fact a vicious close-quarters fight.

On 3 September 1857 Garvin was wounded by a gunshot most probably in the action which led to the award of his Distinguished Conduct Medal. Garvin’s double distinction of winning the VC and the DCM during the Indian Mutiny is unique and made him the most highly decorated non-commissioned soldier to emerge from the conflict.

“Garvin’s decision to volunteer for the storming party was remarkable given that his chances of surviving the attack were not high,” said David Erskine-Hill, medals specialist at the auctioneers Dix Noonan Webb. “His bravery then and when he later also won the Distinguished Conduct Medal made him one of Victorian Britain’s greatest heroes.”

Garvin was born in Cashel in County Tipperary, Ireland in 1826 and originally enlisted in the 74th Regiment in 1842. Transferring to the 60th Rifles, he saw action in the Punjab campaign of 1848-49 and in operations on the North-West Frontier in 1849-50. He was serving in India when the Mutiny broke out in 1857 and was one of those men of the 60th who found the mutilated bodies of two comrades and the corpse of a popular Englishwoman, all of whom who had been killed by mutineers. They swore revenge and this may have been the driving force behind Garvin’s bravery at the siege of Delhi.

Returning to Britain in 1860, Garvin received his VC from Queen Victoria at an investiture in Windsor Home Park. After his discharge in 1865, he served in the Militia and was later appointed a Yeoman of the Guard. He moved to Cambridge,
where he died on 23 November 1874 aged 48, just months after the deaths of his second wife Mary and baby daughter Sophia. The three of them are buried together in the same grave in St Andrew’s Churchyard, Chesterton, Cambridge.

His medal group consists of: the Victoria Cross, the Distinguished Conduct Medal, the Punjab Medal 1848-49 with clasps Mooltan and Goojerat, the India General Service Medal 1854-95 with clasp North West Frontier, the Indian Mutiny Medal with clasp Delhi and the Army Long Service and Good Conduct Medal.