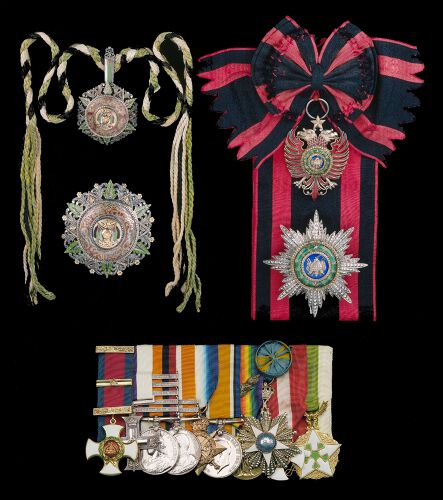 The medals and decorations worn by W.F. Stirling (right)

The decorations and medals awarded to Walter Francis Stirling, the redoubtable Damascus correspondent of The Times who survived an assassination attempt despite being shot six times, are to be auctioned by Dix Noonan Webb in London on Thursday, 12 December 2013. The awards include several won by Stirling when he was Chief of Staff to Lawrence of Arabia and reflect the extraordinary life of a man who was at the heart of military campaigns and political intrigues in the Middle East for decades.

“Stirling’s story reads like the script for a Hollywood movie,” said DNW medals specialist David Erskine-Hill. “He was Lawrence’s right hand man during some of their most daring exploits, was rumoured to have been a spy and survived being shot repeatedly at close range by would-be assassins.”

On 6 November 1949 Stirling invited into his house in Damascus three Arabs who knocked on his door and demanded to see him. He was reluctant to do so as it was a Sunday evening and he and his wife Marigold had two guests for dinner. But, believing that the men had information about the forthcoming Syrian election and keen to get a good story, he decided to talk to them. The men shot him six times and fled leaving the 69-year-old bleeding and losing consciousness. “Well I suppose I am dead or at least dying but I am damned if I feel like it,” Stirling later recalled thinking.

He had been shot in the stomach, liver, chest and arms and one bullet had narrowly missed severing his jugular vein. By a miracle one of his dinner guests was a Syrian doctor called Ernest Altounyan who had arrived just 20 minutes before the shooting. His emergency treatment and subsequent surgery saved Stirling's life, although it proved impossible to extract four of the bullets.

Enjoying a reputation for being tough in Damascus, a few days after the assassination attempt two Arabs were overheard in a city café discussing the attack on Stirling. One of them said: “Did they really think they could kill Colonel Stirling with only six shots?” The shooting remained a mystery for decades but two years ago a book alleged that the French government had orchestrated the attack because it suspected Stirling of being an anti-French spy.

He was no stranger to either danger or tragedy. His father, a naval captain, disappeared in the Bermuda Triangle with his ship just days after Stirling's birth in 1880.

Stirling was commissioned into the Royal Dublin Fusiliers and was awarded the Distinguished Service Order for his gallantry in the Boer War. During the First World War he transferred to the Royal Flying Corps and survived a crash landing in the Sinai desert in Egypt. Returning to the Dublin Fusiliers he was buried alive at Gallipoli after a shell burst just above his head. He was then posted to British headquarters in Egypt and it was there that he met T.E. Lawrence, later known around the world as Lawrence of Arabia. By the time that he was ordered to join Lawrence and the forces of the Arab Revolt against the Turks as Chief Staff Officer, Stirling had already added the Military Cross to his array of decorations.

Lawrence described Stirling as “a skilled staff officer, tactful and wise” whose passion for horses enabled him to become friends with the Arab chiefs. Lawrence and Stirling planned and carried out numerous raids behind Turkish lines and on one occasion were taken prisoner by a patrol of the Bengal Lancers who did not speak English. They were only released when they met a British officer from the Indian Army regiment.

Stirling was awarded a Bar to his DSO for securing the successful occupation of Damascus “in conjunction with another officer” – who was almost certainly Lawrence. He also received a string of foreign awards including the Order of El Nahda from the Arabs.

After the First World War, Stirling held a series of high level British military and administrative appointments in the Middle East and the Balkans, finally commanding the Military Headquarters of the 9th Army in Damascus in 1944-45. He settled there after retiring from the Army and, with his extensive local knowledge and contacts, was a natural choice to become the correspondent for The Times. However, after surviving the assassination attempt he wisely moved to Egypt and from there to Tangier in Morocco where he died in 1958.