A Collection of Memorabilia relating to family of Thomas Percy, Bishop of Dromore, and Edward Whalley 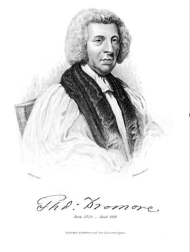 Thomas Percy (13 April 1729 – 30 September 1811), was Bishop of Dromore, Co Down . Born in Bridgnorth, the son of a grocer, he obtained a Kareswell exhibition to Christchurch, Oxford. in 1753 he was appointed to the vicarage of Eastern Maudit, Northampton, three years later moving to Wilby and in 1782 becoming Bishop of Dromore, County Down. A linguist and antiquarian, Percy’s greatest contribution was to literature. He was the author of Reliques of Ancient English Poetry (1765), the first of the great ballad collections. This work is considered to be responsible for the revival of the ballad tradition in English poetry that was a significant part of the Romantic movement, and set the stage not only for Robert Burns, but also for Wordsworth and for Coleridge's Lyrical Ballads.

A member of the Literary Club, founded in 1764 by Sir Joshua Reynolds and Samuel Johnson, Percy made the acquaintance of leading literary and political gentlemen of the day, including Samuel Johnson, Oliver Goldsmith, and Edmund Burke

Edward Whalley (c. 1607 – c. 1675) was an English military leader during the English Civil War, and was one of the regicides who signed the death warrant of King Charles I of England.

He was the son of Richard Whalley High Sherriff of Nottingham and his second wife, Frances Cromwell, aunt of Oliver Cromwell.
At the outbreak of the Civil war in 1642, he took up arms for Parliament. He distinguished himself in battle, commanding one of Cromwell’s two regiments of cavalry at the Battle of Naseby. When the king was seized by the army, he was entrusted to the keeping of Whalley and his regiment, at Hampton Court Palace. Whalley refused to remove Charles's chaplains, and treated his captive with courtesy, so much so that Charles later wrote him a letter of thanks. In the Second English Civil War, Whalley again distinguished himself as a soldier. He was chosen to be a Commissioner (judge) at the trial of Charles I and was the fourth to sign the king's death-warrant, immediately after Cromwell. The King was executed in London on 30 January 1649.At the Restoration, Whalley, with his son-in-law, Major-General William Goffe, escaped to North America, and landed at Boston on 27 July 1660 where they were well received. But opinion turned against them and in 1661 they fled to Connecticut, finally settling in Massachusetts. Attempts by the English government to arrest them failed, and Whalley remained there till his death around 1674/5.