A Fine Collection of Racing Tickets and Passes, the Property of a North Country Collector 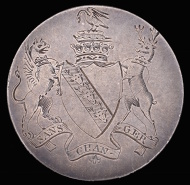 Horse racing is the second largest spectator sport in Great Britain and one of the longest established, with a history dating back many centuries. Not for nothing is it known as the ‘sport of kings’, a tradition that can perhaps be dated to the time of James I, who would rather spend time with his horses at Newmarket than be involved in affairs of state. The first Gold Cup was staged as far back as 1634 and, while Oliver Cromwell kept double standards in that he banned racing while retaining a stud of his own, the sport flourished under Charles II and James II. Queen Anne kept a large stable and was instrumental in founding Royal Ascot and by the middle of the 18th century the Jockey Club was formed to create and apply the rules of racing, which have largely come down to the present day. Royalty, the aristocracy and the nobility continue to patronise the turf as owners, but the appeal of the sport to the general public from a betting perspective, from lords to laymen, millionaires to merchants, stockbrokers to students, is as strong today as it was in Georgian times.

The collection described in the following 113 lots is the most comprehensive of its kind ever offered at a numismatic auction. Formed with diligence over the past 30 years by a discerning collector who himself has owned racehorses, it features a number of museum-quality pieces from the days when substantial sums of money were subscribed by the well-to-do and the merchant classes, enabling grandstands to be built at the various tracks up and down the country. In return subscribers would receive a ticket or pass, often for a lengthy period of 20 or more years and sometimes even for life, enabling them to free admission. Among the highlights in the collection are the York medal awarded to Lord Rockingham in 1768, two years after his first term as Prime Minister (Lot 3274), a medal awarded to the Earl of Sefton, founder of Aintree racecourse (Lot 3219), a medal awarded to John Smyth, Master of the Mint at the turn of the 19th century (Lot 3268), a pair of medals to the 12th Earl of Derby, founder of the Derby and Oaks racing festivals (Lots 3216-17), and from the modern era, another pair awarded to the only horse to be victorious in both the Arkle Chase and the Cheltenham Gold Cup (Lot 3213) – P.J.P-M.