The Collection of British Orders, Decorations and Medals formed by the late Fred Rockwood 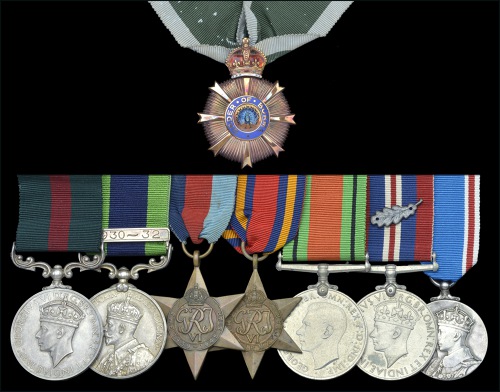 One of just 24 awards of the Order of Burma (1940-47), which, in combination with the Burma Gallantry Medal - a little over 200 awards - constitutes a unique combination of awards.

‘In recognition of gallant and distinguished services in Burma and on the Eastern Frontier of India.’

Maji Tu originally enlisted in the 70th Kachin Rifles in May 1921, his discharge certificate listing his subsequent honours & awards thus: ‘Malabar Rebellion; Burma Rebellion; Coronation; mention in despatches; meritorious certificate; Burma Gallantry Medal; Order of Burma; 1939-45 Star; Burma Star; Defence Medal; mention in despatches 1941-42.’ An Hon. Lieutenant at the time of taking his discharge from the 2nd Burma Rifles in May 1947, he next joined the 5th Kachin Rifles as a Captain and was killed in action at Kyaukpadaung on 25 July 1954 during fighting against the Nationalist Chinese (Kuomintang, or K.M.T.); sold with photocopies of the recipient’s discharge certificate and Coronation Medal 1937 certificate.

Several articles can be found on the internet honouring the career of this great soldier but they are all written in the Kachin tongue. The following extracts have been loosely translated from one of these:

‘Since the British lost Kawkarik, Japan kept on launching by dividing into two platoons. The first platoon led to Pa-an, Kayin state and the rest led to Moulemein. Japan troops who already conquered Tavoy also targeted and attacked Moulemein from every side. Moulmein village is situated on the conference of Than Lwin River at the east coast, and there is Murtaban village in the west south part. The war broke out for over one and half week. Like the waves, Japan troops were increasing a lot. That’s why Moulmein village became a great battle field. As the enemies charged in come closer, the soldiers could defend just by Bayonet fighting. Although Japan entered with a big troop, only Than Lwin River left behind for British to retreat. They just wondered about Japan troop which came in their hordes even though how much they defended.

Apart from Beyonet fighting, some defended by fists and even with their teeth. Some also fought by their long sword. These all were because they were being charging and much closer much with the enemy. Even though the British were defending their best as they did not have any space to move back. Similarly, Japan also kept on charging and attacking even though they lost a lot of soldiers. There were filled with blood, corpses and soldiers who got injuries along Moulmein village and Than Lwin River side. Both troops lost many soldiers. There were lots of different noises, the smoke of burning, lots of corpses, lots of soldiers who got injuries and so much blood had been shed.

The last option and hope to escape for British was the ship which was waiting at the coast. The more they moved back, the more Japan charged them closely. In that situation, British troops tried to take the wounded soldiers back to the ship. If there was no one to shoot back, the British troops and the ship will be sunk in Than Lwin River. With no time to think for many things, without waiting for the order; while friends were moving back to the ship, a brave Sub. Maji Tu took the gun and fight back with Japan troops alone. Since the most important thing was to save lot of lives, he decided to sacrifice himself. It was full with smoke due to the Japan attack. All the friends were already on the ship. At the shore line, Sub. Maji Tu alone kept on shooting and fighting by holding five or six guns. Under the rain of bullets, the ship already left from the shore. The friends salute Sub. Maji Tu for the last time from the ship. Sub. Maji Tu tried to fight against alone in order Japan not to attack the ship.
After the ship had gone far from the shore line, Sub. Maji took only one gun, moving back by kept on shooting. His muscles and blood were hot like a fire, and sweats were also all over his body. That place is the confluence of Than Lwin River but it’s the starting point of sea, and it is about five miles in wide. As there was no space left for him to move back, he kneeled down beside Than Lwin Rvier, “Oh Lord, I give my life and my soul to you today! Help us to have a good warrior in the future generation of Kachin People who can protect the heritage and country and to take the duty that I left undone.”

After his pray, he jumped down to a big deep confluence of Than Lwin River which is the starting point of the sea…

Sub. Maji Tu was grown up in Kachin mountain that’s why he did not know how to swim. Even if he knew how to swim, how could he swim in such a huge deep river! In 1921, he started to perform his duty. At that time, he was 41 years old. Now, time and day were meaningless for Sub.Maji Tu who jumped down into the deep sea. No need to remember the date for him anymore, too. In fact, it was 30th January 1942 when Sub.Maji Tu jumped to Than Lwin River. Japan troop consoled in shooting with their machine gun as well as big armament to the British ship which was escaped due to Sub.Maji Tu’s protection. That was the day that Moulmein village was occupied by Japan, too.

The British soldiers which escaped by the ship felt sorry for Sub. Maji Tu, left in a deep Than Lwin River. Especially for Kachin people, as this is their parts of blood, they were sad with full of tears. Some endured stoically to control their mind. They remembered and gave a respect that, he alone kept on fighting against and scarified his life in order to save lots of their lives. When the Japan shot the cannon ball, it troubled the water and also the ship. It was very frightening. They thought that Sub.Maji Tu was killed in a cruel, severe and unkindly way. When they reached the other side, they gave a salute to Sub.Maji Tu from the ship and climbed down to the shore.

Than Lwin River keeps on flowing for 1750 miles from Tibet Mountain where is the beginning place for the Kachin people. The speed of the river is weak in this place. It was the full moon night (i.e. 30th January), where people could easily run away from the enemies cause of the moon’s light. Tides from the sea were also rising high so that he wondered if the Than Lwin River becomes stronger in the summer or if it’s because the ghosts become alive. It was already three days that British troops were moving back to Than Lwin River because they lost the battle with Japan. That day was 2nd February 1942. Due to the tides, the waves were coming to cover the sands on the shore and moving back to the sea. In such kind of big waves, there was something like a corpse left on the other shore of Murtaban. That corpse was not the thing; it was the body of Sub.Maji Tu who jumped into the river last three days ago. Only God knows how he could pass such a big sea and how he could reach on that shore!

That body of Sub. Maji Tu was not a dead one; instead, he was still alive. He moved slowly. He could feel that the tides were coming to touch his leg softly. All of his hands and legs were still weak. As he was terribly weak, he was weary a lot. He tried very hard to sit down. He wondered if he was still alive. He even couldn’t believe himself. He slowly cleaned the sand and mud from his ear and nose. He did not know where this place was; the place now he arrived was in the enemy area? Was it in his place? He could know that the war was still going on when he heard the sound of the booms and machine guns. He couldn’t remember how many days it had been after he fought against Japan at the shore of Moulmein. Even though there was no injury on his body when he checked himself, he realized that he was saved from the sea because his body, mouth, nose, ear, eyes, head and hair were full of mud.

Sub. Maji Tu tried very hard to walk. On his body, there was nothing except his undergarment. As he was weak, he limped off. He randomly moved but God will lead him. He relied on God not to lead him to Japan troop. When he passed through the British troop unexpectedly, his friends saw him and thought it was a ghost.

“It’s me. I am Sub. Maji Tu.” He said like that, but they still wondered and couldn’t believe it. Sub. Maji Tu took the food and medicine, and then kept on fighting against Japan in order to get a victory with the strength from God.

After the World war, though Myanmar got independence, where there were civil wars, he could still suppress with the position of Capt. Maji Tu. While he was protecting Union Myanmar in this way, our warrior leader Capt. Maji Tu passed away on 25th July 1954, in the war of attacking Myanmar communist at Kyaukpadaung village which is beside of Popa mountain, west part of Meiktila village, the middle part of Myanmar.

Even though our leader Capt. Maji Tu is not here anymore, his courage and bravery is recorded in the history and it is a pride for his generation. It should not be forgotten that Myanmar country is a country that lots of Kachin people lives have been scarified to save the country many times.’