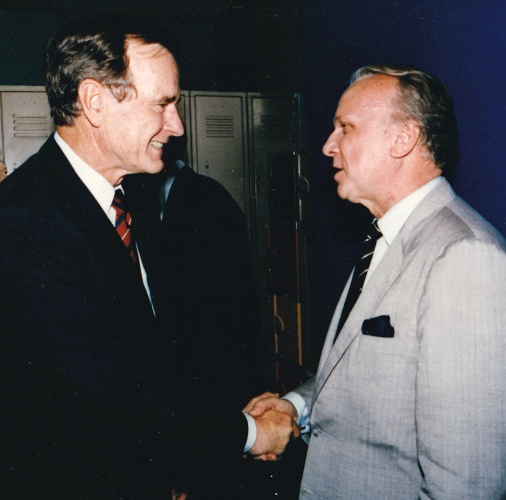 An important group of Central Intelligence Agency (C.I.A) medals presented to “one of America’s greatest intelligence officers” sold for £22,000 (hammer price) – seven times their pre-sale estimate - at Dix Noonan Webb in auction of Orders, Decorations, Medals and Militaria on Wednesday, February 17, 2021. The medals - each framed and hidden behind a lithograph picture of the Middle East – were being sold by the family and had been expected to fetch £2,000-3,000. They were bought by a London-based buyer who was new to DNW but was fascinated with spy-related items.

Described by espionage expert, John Barron, author of KGB: Secret Work of Soviet Secret Agents, as: “one of America’s greatest intelligence officers,” the medals were awarded to legendary veteran C.I.A. officer Jim Fees (born in Nebraska in 1931) who, from the early 1960s, served undercover in Africa, Europe, and the Middle East; organised and managed secret intelligence operations from Washington and three continents, including a number of covert operations; and commanded major paramilitary operations in various International locations. As personal adviser to President Reagan on sensitive terrorism issues, he conducted top-secret missions to Lebanon and elsewhere in a bid to free American hostages, and most notably was also responsible for the secret acquisition and delivery to the U.S. of the Soviets’ most advanced frontline fighter plane at the time.

As Christopher Mellor-Hill, Head of Client Liaison (Associate Director) of Dix, Noonan, Webb, explains: “The medals awarded to Fees by the CIA highlight the amazing stories of those undercover operatives involved in espionage at the height of ‘The Cold War’ and on the frontline in such places as the Middle East. His acquisition of a Russian MIG 23 fighter plane for the US Air Force to understand and learn to combat with (as typified in that great movie Top Gun with Tom Cruise and Kelly McGillis) was an early highlight to his amazing career in which he also helped pave the way for Egypt to move out of Russia’s shadow into a much more pro American position in the 70s & 80s. When we talk of war heroes, he is one but as an agent of ‘The Cold War,’ the era of great spying and espionage war games between the communist East and pro capitalist West as typified in that other great TV drama series Tinker Tailor Soldier Spy with Sir Alec Guinness.”

CIA medals are often referred to as “jock strap medals” since they are often awarded secretly (due to the classification level of the respective operation) and cannot be displayed, or on occasion, even acknowledged publicly. Mr Fees had had his three awards with their citations, individually mounted in specially-designed gatefold, gold-leaf frames. The outer frames each with an original scenic, Middle Eastern lithograph by the well-known artist David Roberts. Therefore, on looking at each of the hung pictures, one would be no wiser of their inside content unless they were opened up to reveal the C.I.A. medals and citations.