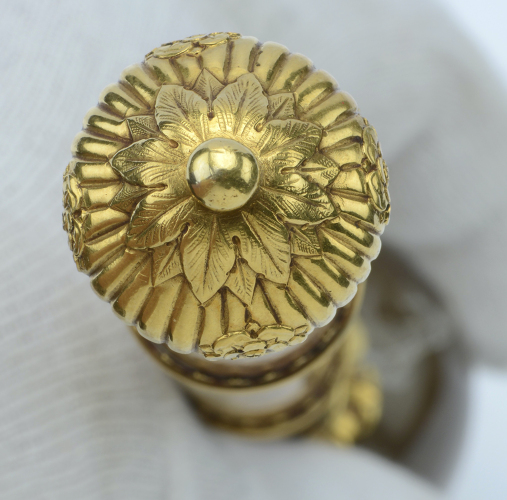 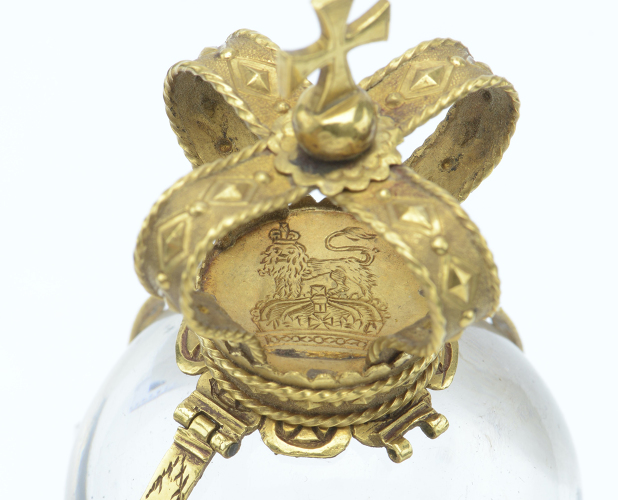 A rare and unusual ceremonial rock crystal and gold mounted staff of office or tipstaff, dating from the first half of the 19th century, discovered in a recent house clearance on the outskirts of London, is to be sold by International Coin, Medals, Banknotes and Jewellery specialists Dix Noonan Webb in a live/ online auction of Jewellery, Watches, Antiquities and Objects of Vertu on Tuesday, September 15, 2020 at 1pm. The piece, offered for sale in original condition, without restoration, measures 26.5cm in length. Estimated to fetch £5,000-7,000, it is believed to be of possible historical interest and perhaps of Royal association.

The ivory shaft is topped with a rock crystal sphere, beneath gold crown surmount, and engraved below with a crowned lion passant upon a crown. As Frances Noble, Head of Jewellery at Dix Noonan Webb explains: “The use of fine gold mounts, together with the engraved ‘crowned lion on crown’ (which is consistent with the style of engraving used on coinage during the reign of George IV), may suggest a possible Royal association. One theory is that this piece may have connections with the coronation of King George IV on 19th July 1821. This was an extremely lavish and fabulously expensive occasion (the total cost of the event was reported to be in the region of £243,000 - equivalent to £22 million today). Dignitaries and courtiers who attended the service processed in their fine robes, and carrying their staves of office on entry to Westminster Abbey. A series of detailed watercolours of this procession were painted by Sir George Nayler in 1823, later bound as a folio volume in 1837 (
The Coronation of His Most Sacred Majesty King George IV) - in these paintings many of the guests are depicted carrying decorative staves of office.”

She continues: “There could also be Royal connections with Scotland. In August 1822, following the coronation, George IV undertook a Royal state visit to Scotland (the first royal visit of a reigning sovereign since King Charles II in 1651). The visit, organised by Sir Walter Scott, commenced on Monday 11th August, with the King’s arrival at Leith. The Honours of Scotland - the Scottish crown jewels, had been recently rediscovered in 1818; they had been stored in a great oak chest in the stone vaulted Crown Room of Edinburgh castle, hidden there since the Treaty of Union in 1707, and unseen for over 100 years. The King’s visit culminated in a grand procession to restore the Honours to the Castle; contemporary paintings again illustrate the vast scale and expense of these events, with guests sumptuously and richly attired, bearing appropriate staves of office.”

Beliefs in the talismanic and prophetic powers of ‘magic’ crystals dates back to the ancient world, with Roman historian Pliny recording the supernatural powers of quartz crystal. Rock crystal in particular is recorded as having ‘occult powers’, with known examples of prized crystals dating back to the Viking and pre-Christian periods. To quote jewellery historian Geoffrey Munn in an article on this subject: “It seems likely that ownership of crystal balls in precious metal mounts was for an elite and, in common with jewellery of all kinds, they were a powerful status symbol, even a mark of sovereignty. The sceptre of the Scottish Regalia, for example, is set with a fine specimen at its head”. References to the magical powers of crystal balls appears to be widespread in history, but particularly in Scotland. The Scots even took magic crystals into battle in the hope that this would ensure victory.

Examples of early crystal globes show mountings within a ‘sling’ of precious metal strips, joined to decorative mounts at the north and south ‘poles’ of the stones. Geoffrey Munn explains that “these mounts must be closed mechanically as the use of hot solder would almost certainly damage the crystal. Of those that retain their original slings, some are decorated with zigzags or chevrons”. In this article, Munn illustrates an early 17th century rock crystal talisman pendant, mounted in silver and decorated with stylised roses at each end, within a sling mount - the rock crystal sphere within the staff of office being offered here for sale is secured in a very similar fashion.


Free online bidding is available is www.dnw.co.uk
For more information, please call 020 7016 1700
DNW are on Social Media
Instagram @dixnoonanwebb or @dnwjewellery
Facebook: dixnoonanwebb
Twitter @dixnoonanwebb
NOTES TO EDITORS:
Dix Noonan Webb – a brief history
In 1991, its first year of trading, the company held three medal auctions and sold 1,200 lots for a total hammer price of £553,000. Two years later it opened a coin department which also auctions commemorative medals and tokens and in 2015 DNW added jewellery to its sales calendar. In 2018, it set up a standalone banknotes department and expanded into premises next door. In the same year, DNW achieved a total hammer price of £11,676,580 and the total number of lots across all departments was 20,273. To date the company has sold in excess of 300,000 lots totalling £155 million.