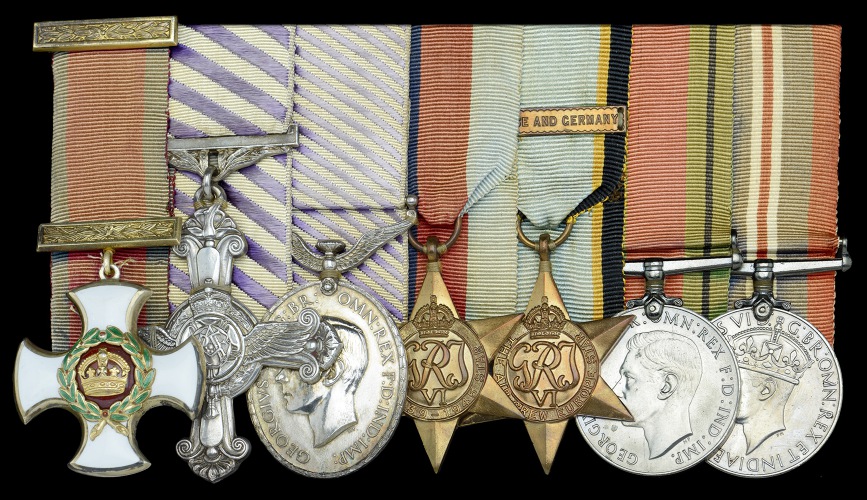 The rare Second War D.S.O., D.F.C., D.F.M. group of seven awarded to Flight Lieutenant R. J. Cook, Royal Air Force Volunteer Reserve, who as an Observer with 15 Squadron and took part in numerous sorties against targets in France and Germany in 1941 and then was Captain of the ill fated ‘Star Dust’ Avro Lancastrian airliner that disappeared without trace on a flight between Buenos Aires and Santiago in 1947. The wreckage of his aircraft was only discovered in 1998: the meaning of ‘Star Dust’s’ cryptic last Morse code message ‘STENDEC’ has been debated ever since and has been the subject of various documentaries and books. It will be offered by Dix Noonan Webb in their online/ live auction of Orders, Decorations, Medals and Militaria on Thursday, June 18, 2020 on their website www.dnw.co.uk. It is being sold by Cook’s family and is estimated to fetch £12,000-15,000.

Oliver Pepys, Associate Director and Medal Auctioneer at Dix Noonan Webb commented: “We are delighted to be offering this important and rare combination of awards, which is one of only 18 D.S.O., D.F.C., and D.F.M. combinations of gallantry awarded to the Royal Air Force for the Second World War. Not only did Cook have an illustrious wartime career but the continuing intrigue around the mystery of the disappearance of Star Dust will undoubtedly attract significant interest. ”

Reginald James Cook was born in Derby in 1918 and after leaving school worked as a draughtsman. He joined the Royal Air Force Volunteer Reserve in 1936 and at the outbreak of the Second War was sent for training as a Navigator in Canada. By mid 1941, ranked Flight Sergeant, he was serving with 15 Squadron, flying as an Air Observer/Navigator. At this time, 15 Squadron was operating from Wyton with Short Stirling I’s against targets in France and Germany. These included raids on Berlin and enemy aerodromes, Cook being particularly credited for his actions in the leading aircraft, during a daylight raid on warships at Brest in December 1941. On his operational tour ending, Cook returned to Canada to train as a pilot. He was commissioned probationary Pilot Officer on 16 May 1942, and was promoted Flight Lieutenant on 16 May 1944, and by the autumn 1944 was serving with 608 Squadron, who specialised in fast, high-flying night raids on Germany, particularly Berlin.

Post-war, Cook was recruited by ex Air Vice Marshal Don Bennett, to be a pilot with British South American Airways (B.S.A.A.). Bennett who had led Cook’s old No. 8 Group during the War, had resigned his Commission in 1945 and taken the civil role as General Manager at B.S.A.A. The company itself was formed in late 1945 to provide flight services from the UK to South America, using Avro 691 Lancastrian Mk.III civil transport aircraft.
Initially flying as a co-pilot, by the summer of 1947, Cook had clocked up over a dozen full round trips on all B.S.A.A. routes. Passing his First Class Navigators exam on 17 July 1947, he was then given his first command, now with the all important title of Captain. Less than a month later, at 1:46 p.m. on 2 August 1947, Cook, Captaining G-AGWH ‘Star Dust’, with 4 other crew and 6 passengers, took off on a scheduled flight from Buenos Aires, Argentina, to Santiago, Chile. Star Dust never arrived. The last contact with the flight was at 17:41 when a radio operator at Santiago received a Morse code message from Star Dust, stating an ETA of 17:45 and ending with STENDEC. Santiago’s operator asked for clarification and STENDEC was repeated twice more. Search teams scoured the mountains but found no clues as to the whereabouts of Star Dust.

51 years later, in 1998, two Argentine mountaineers climbing Mount Tupungato, about 50 miles east of Santiago, found a Rolls-Royce Merlin aircraft engine and other signs of wreckage. In 2000, an Argentine Army expedition found additional wreckage and human remains, by which they were able to confirm that the wreckage was of flight G-AGWH Star Dust. An investigation determined that due to bad weather conditions, Captain Cook probably encountered a jet stream at altitude, this carrying the airliner slightly off-path so that he thought he was clear of the Andes, when he had yet to cross them. Star Dust had then crashed head on into a near vertical glacier on the side of the Mount Tupungato, causing an avalanche that buried the aircraft. After DNA tests had been carried out on the human remains, it was determined that among the remains were those of Captain Cook, but it was another five years before his remains were returned to the family. He was buried in his home town of Melbourne, Derbyshire on 8 July 2005.

The meaning of the Morse code message ‘STENDEC’ has been debated ever since Star Dust’s disappearance and subsequent discovery; the puzzle has never been solved, and has led to a number of different theories. A BBC Horizon documentary ‘Vanished: The Plane That Disappeared’, tells the story of Star Dust’s fateful flight and subsequent discovery, as does a similar documentary by PBS and the book ‘Star Dust Falling’ by Jay Rayner.