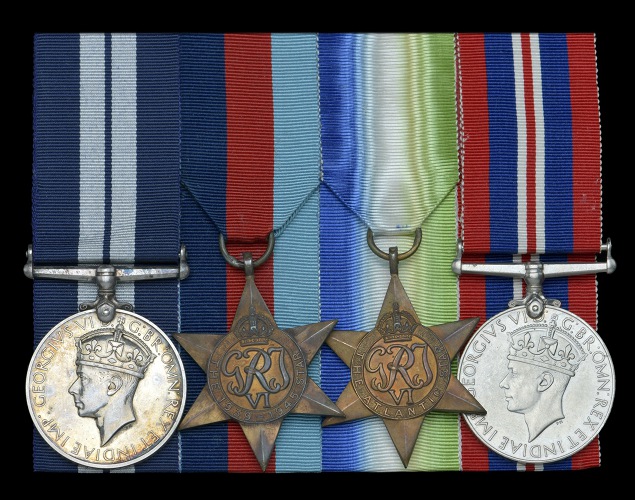 Just after the 75th anniversary of D-Day, Dix Noonan Webb, the international coins, medals, banknotes and jewellery specialists will be offering a rare Second World War ‘D Day’, ‘Gold’ Beaches Naval Frogman’s Immediate D.S.M. group of four, that was awarded to Able Seaman A. G. Hirst who took part in the initial landings of Allied Forces on the coast of Normandy. It is estimated to fetch £6,000-8,000 in their auction of Orders, Decorations, Medals and Militaria on Wednesday, July 17 and Thursday, July 18, 2019 at their auction rooms in central Mayfair (16 Bolton St, London, W1J 8BQ).


As Nimrod Dix, Deputy Chairman and Medal Expert at DNW, explains: “On the 75th Anniversary of D-Day it is worth remembering that these brave naval frogmen were the first men ashore, tasked with clearing the beaches of obstacles and mines to make a safer passage for the waiting landing craft, while under enemy mortar and machine gun fire from the beach perimeter. Able Seaman Hirst was an example to all his comrades as he persevered with this work in spite of suffering from severe and multiple injuries.”

For the invasion of Normandy, the Force Commanders used approximately a hundred and twenty officers and men of the L.C.O.C.U units divided into ten parties, or units. Each unit had an officer and eleven men, and each was allotted to its own beach and had its own particular job to do.

As Lieutenant Hargreaves, Hirst’s commanding officer of their unit, who was subsequently awarded the D.S.C., described what he, and the other frogmen like Hirst, faced on ‘D’ Day: "We must have been about four hundred yards from the beach when the firing first started, and they didn't forget to inform us that they knew we were coming. When we finally got on the beach we discovered that we were being systematically sniped, not only with rifles but also by odd bursts of machine-gun fire - a most unpleasant experience - but one that we soon got used to.”

He went on to say: "The weather was very much worse than anyone would have expected in June, and we had the greatest difficulty working in a very heavy surf. It was hard going and we soon got pretty tired, but in the meantime the obstacles were being slowly but systematically destroyed.”

And finished by saying: “In all, we successfully disposed of over two thousand five hundred obstacles.”