The countermarked 22 Guilders from Essequibo & Demerara sold for £55,200

The countermarked Guadeloupe 22 Livres sold for £26,400 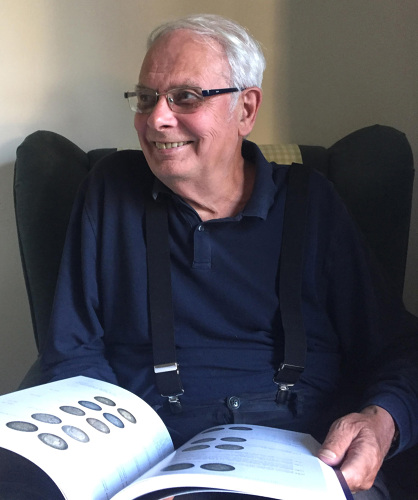 The magnificent collection of cut and countermarked coins assembled by the leading British numismatist Bob Lyall produced an auction triumph at Dix Noonan Webb on 25 September 2018 when every one of the 328 lots found buyers in a classic ‘white glove sale’. Fiercely competitive bidding from around the world left many pre-sale estimates far behind as would-be buyers competed for rarities assembled over several decades. The total hammer price of the auction was £508,615 while the overall spend once buyers’ commission was added was £610,338. The collection had been expected to fetch in the region of £200,000

“This was a very exciting auction in which to wield the gavel,” said auctioneer Christopher Webb, head of the Coins Department at Dix Noonan Webb. “Bids were coming in thick and fast in the room, on the telephone and on the internet and we had a lot of strong commission bids placed in advance. Normally a sale of this size should have been wrapped up in about two hours but it took more than twice as long. There were bidders from countries as far apart as the United States, Brazil and Sweden and there were a lot of new buyers – I didn’t recognize three-quarters of the names on the final list of purchasers.”

Bob Lyall established himself as one of the world’s leading authorities on cut and countermarked coins, which had additional marks and symbols punched into them, and in some cases were cut down, while they were still circulating. This was done for a variety of reasons to address specific currency and marketplace issues. His collection was mainly from the Caribbean, although it also included specimens from Gibraltar, the Ionian Islands and West Africa.

The undoubted star of the Dix Noonan Webb auction was the only recorded specimen of the Essequibo & Demerara 22 Guilders countermarked under the Ordinance of August 1798. This handsome gold coin, originally minted in 1771 during the reign of Joseph I of Portugal, has the Essequibo & Demerara countermark under Joseph’s chin on the obverse and was estimated at £6,000 to £8,000. Bidding began at £6,000 and quickly shot up until a collector from the United States bidding on the telephone was successful paying £46,000 hammer price (£55,200 with buyers’ commission).

The second highest price was £22,000 hammer (£26,400 with buyers’ commission) paid for a gold coin minted in 1784 during the reign of Maria I and Peter III of Portugal and subsequently countermarked by the French administration in Guadeloupe with a value of 22 Livres under the authority of April 1804. Described by the catalogue as being “of the highest rarity”, it had been expected to sell for £5,000 to £6,000.

Other highlights included an Essequibo & Demerara 3 Guilders countermarked under the authority of 1808 which had first gone into circulation in Mexico City in 1796 bearing the head of the Spanish king Charles IV. In addition to the countermark, this piece has a circular piercing with 19 crenations. It sold for £18,000 hammer price (£21,600 with buyers’ commission) against an estimate of £4,000 to £5,000. An extremely rare Guadeloupe British administration coin authorised in 1811 fetched £15,000 hammer price (£18,000 with buyers’ commission). The Maria I and Peter III Portuguese gold coin dating from 1786 has an 82 Livres 10 Sols countermark and was expected to fetch £3,000 to £5,000. Only two other specimens have been recorded.

Mr Lyall developed a collecting interest at an early age, starting off with artefacts and objects of interest given to him by family members. By the age of 12, his interest focused primarily on numismatics. He was already on his way to forming a significant collection of the coinage of Charles I (sold by Dix Noonan Webb in 2015 and 2016) when he had his first exposure to the West Indies whilst doing National Service with the Royal Navy in 1958. He developed a particular interest in the cut and countermarked coins of the West Indies and over several decades built up a huge fund of knowledge. He focused on study and research, writing hundreds of letters to museums, historical societies and individuals who might have useful information and visiting libraries and museums in the United Kingdom and the Caribbean.


Dix Noonan Webb – from strength to strength since 1991

In 1991, its first year of trading, the company held three medal auctions and sold 1,200 lots for a total hammer price of £553,000. Two years later it opened a coins department which also auctions commemorative medals and tokens and in 2015 DNW added jewellery to its sales calendar. This year it has set up a stand-alone banknotes department.