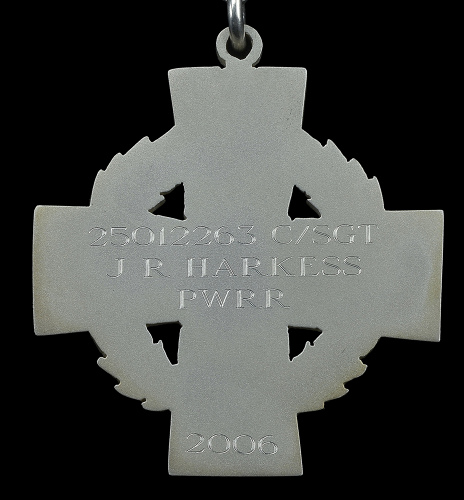 The reverse of the CGC with the name of Harkess inscribed

A rare Iraq War Conspicuous Gallantry Cross awarded to a British soldier who showed extraordinary bravery during three fierce battles with insurgents is to be auctioned by Dix Noonan Webb, the international coins and medals specialists, in London on 25 February 2015. The CGC and other medals awarded to Colour Sergeant James Harkess are expected to fetch £100,000 to £120,000 in the sale of Orders, Decorations and Medals.

Colour Sergeant Harkess, of the Princess of Wales’s Royal Regiment, showed repeated gallantry during intense urban warfare against the Mahdi Army militia in the lawless Iraqi town of Al Amarah during 2006. The former Nottinghamshire miner, who worked at Clipstone Colliery, near Mansfield, before joining up, won Britain’s highest combat gallantry award after the Victoria Cross during some of the most brutal fighting experienced by the British Army in modern times.

On the first occasion in May 2006 50 heavily-armed militiamen tried to cut off part of his company. Recognizing the danger, he secured a route to safety leading his platoon from his Warrior infantry fighting vehicle whilst under heavy fire. The citation for his CGC reads: “Having gained the tactical advantage, he then held the vital ground he had won which allowed the company to be extracted safely. His actions prevented the isolation of British soldiers, denied the enemy the opportunity to close and saved lives”.

Weeks later he played a crucial part in a search operation in Al Amarah that led to the biggest and most intense battle in Iraq for two years. The citation reads: “The narrow alleyways and roof tops provided cover for 200 Mahdi Army soldiers as they engaged C Company with rocket propelled grenades, heavy small arms fire, snipers, blast bombs and grenades. Colour Sergeant Harkess quickly secured a key junction, a pivotal position he held for six hours….Strike marks peppered his vehicle yet he refused to take cover.”

Finally in July 2006 Harkess took part in an operation to protect a re-supply convoy that resulted in an insurgent ambush. “Despite enemy fire, he accepted that he could not withdraw his platoon without exposing the convoy to greater danger,” says the citation. “With complete disregard to his personal safety, he again repeatedly exposed himself to danger in order to locate the enemy.” The citation concludes that “throughout these engagements Colour Sergeant Harkess was steadfast under extreme pressure and led his platoon in the face of the enemy with raw bravery”.

Harkess was later promoted to Sergeant-Major and retired from the Army in 2014 after 22 years service. Now aged 46, he has returned to live in his native Nottinghamshire. He says: “I loved the Army. I have always said that if I was able to do it all over again then I would. I miss it but you realise that when it’s your time to leave then you have to go.” Asked why he has decided to sell his medals, he explains: “I have got to the stage when I have all the memories that I require. They should raise a substantial amount of money and I suffer from ill-health which has meant that I have not been able to work since I left the Army. Because of this I am dependant on my Army pension so the sale will help me financially.”

Of the 58 Conspicuous Gallantry Crosses awarded since its inception in 1993 only 15 were for Iraq – less than half the number awarded for the war in Afghanistan. Harkess has always been modest about his bravery. He said later about one of the actions that won him the CGC: “It was noisy, obviously, and at various times I had to get out of the turret and stand on the vehicle to shout at the lads on the ground, to either reassure them or direct them. In my citation for the medal, it talks about this being evidence of ‘immense courage’ but to be honest anyone would have done exactly the same, and they probably have at various times. It wasn’t as though we even had time to be nervous or scared. It was so intense……you just don’t have time to think about anything else.”

Pierce Noonan, a director of Dix Noonan Webb, says: “James Harkess showed astonishing qualities of bravery and leadership during some of the most ferocious street fighting experienced by the British Army since the Second World War. Yet, as a storm of fire was directed at his men, he remained calm, focused and professional. He is the kind of sergeant who has seen the Army and its soldiers, many of them very young, through conflict after conflict down the centuries. Such men are a very special breed.”

In addition to the Conspicuous Gallantry Cross, Harkess also received the General Service Medal with clasp for Northern Ireland, the NATO Medals for Former Yugoslavia and Kosovo, the Iraq Medal, the Operational Service Medal for Afghanistan, the Elizabeth II Golden and Diamond Jubilee Medals, and the Military Long Service and Good Conduct Medal. They will all be sold as one lot.