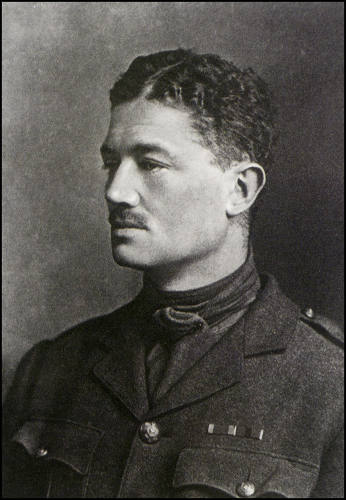 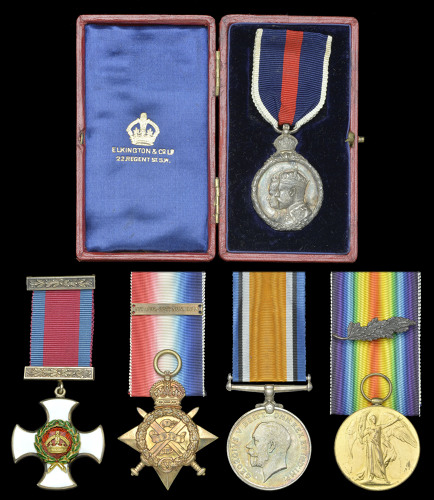 Grenfell, whose controversial war poem
Into Battle was first published on the day his death from wounds was announced in 1915, won the Distinguished Service Order for bravery during a daring reconnaissance behind German lines in the early months of the war. To be sold with his three campaign medals and the award he received as a page at Edward VII’s coronation, the group is expected to fetch £12,000-15,000.

Into Battle ensured Grenfell’s posthumous fame when it was published in a newspaper, but it also provoked a debate about his beliefs which continues today as Britain marks the centenary of the outbreak of the First World War. Unlike other poets such as Wilfred Owen and Siegfried Sassoon, who condemned the conflict, Grenfell gloried in it and once wrote: ‘I adore war, It is like a big picnic without the objectlessness of a picnic.’ Had he lived longer – he died in a hospital in France on 26 May 1915 – he might have come to share his fellow poets’ horror and disillusionment, but his enthusiasm has earned the him the disapproval of the literary establishment. Grenfell represented the last generation of men for whom war represented glory not suffering.

What is not in dispute were Grenfell’s abilities as a poet. Into Battle met great critical and public acclaim and became one of the most anthologised poems of the 20th century. Robert Graves considered Into Battle to be an authentic expression of the ‘overwhelming sense of natural beauty which a soldier is entitled to recognise as a premonition of death’. When a slate stone commemorating Great War poets was unveiled in Poets’ Corner in Westminster Abbey in 1985, Grenfell was one of only 16 names inscribed on it. His words – ‘Brother, brother, if this be the last song you shall sing, Sing well, for you may not sing another, Brother sing’ – are as moving now as when they were written shortly before his death.

Grenfell wrote the poem on 29 April as his regiment, the 1st Royal Dragoons, in which he served as a Captain, moved up towards the front line at Poperinghe. He wrote in his diary: ‘Wonderful sunny, lazy days – but longing to be up and doing something. Slept out. Wrote poem – Into Battle.’ He sent it to his mother telling her to forward it to The Times if she wished, little knowing that it would eventually appear in print on the day his death was announced. A fortnight later on 13 May 1915 Grenfell was wounded by shellfire. He was taken to hospital in Boulogne where he survived long enough for his parents, Lord and Lady Desborough, to be able to visit him. However, a shell splinter had caused brain damage and, despite two operations, surgeons were unable to save him. Grenfell died on the afternoon of 26 May and was buried in the military cemetery at Boulogne.

‘Grenfell was a remarkable man, immensely brave and a multi-talented sportsman as well as being one of the finest literary talents of his generation,’ said medals specialist David Erskine-Hill. ‘His opinions are difficult for many people to understand today because our view of the First World War has been shaped by other poets. But Into Battle reminds us that there was widespread enthusiasm in Britain for the conflict in its early months.’

Julian Grenfell’s medal are being auctioned with his brother Gerald William ‘Billy’ Grenfell’s three First World War campaign medals and a presentation shield for swimming awarded to their sister Monica, who served as a nurse in France and was present at Julian’s death. They are being sold by a private collector and have never been auctioned before.

Billy Grenfell, who was killed whilst serving as a 2nd Lieutenant with the Rifle Brigade on 30 July 1915, also wrote poetry and on 11 August 1915, shortly after his death, The Times published verses by him which it described as ‘a translation from the Latin’.