Our experts are available to answer any questions you may have regarding this lot. If you would like to ask a question, please enter it below and click 'Ask an Expert':

If you would like to see any additional images please complete the form below.

Any reasonable requested images will be added to the Lot Information and you will be sent an email.

Do you know someone who may be interested in this lot? Let them know by entering their name and email address below and pressing 'Tell a Friend'. 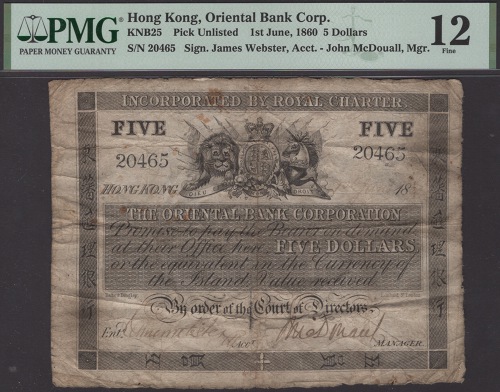 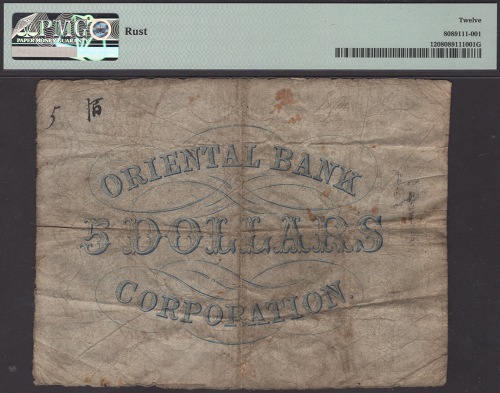 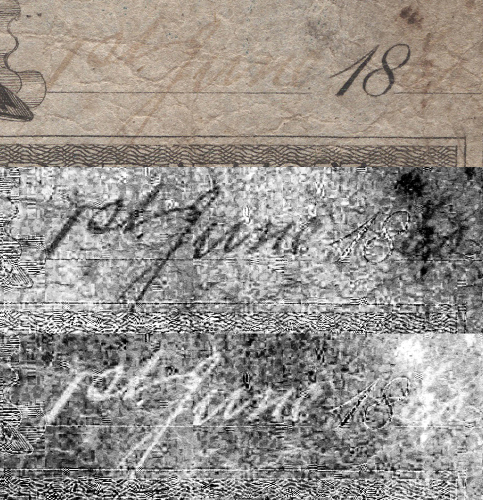 The remarkable ‘Hong Kong 1860’ Five Dollar Banknote, issued by the Oriental Bank Corporation - The earliest known fully issued banknote of any denomination for Hong Kong - An extraordinary new discovery that furthers our understanding of early banknote issuance in the region

Oriental Bank Corporation, Hong Kong, $5, 1 June 1860, serial number 20465, signature of the Manager, John McDouall, at right and the Accountant, James Webster, at left, Royal Coat of Arms at upper centre, reverse blue, paper with a clear watermark, a little rust and some scuffing and dirt, no tears or holes, strong and original paper, in PMG holder grade 12, fine
K.N.Boon 25, unlisted in Pick, listed as unconfirmed in TBB £30,000-£50,000

The Oriental Bank was the first bank to open a branch in Hong Kong. Its office building was located at 14 Queens Road in Victoria - a central and prestigious location. It was the only bank to issue notes in Hong Kong until 1858, when the Mercantile Bank of India, London & China opened its doors. This was rapidly followed by several other banks in the mid 1860s but by this time the Oriental Bank Corporation was the pre-eminent exchange bank, and banknote issuer in the region, with a paid-up capital of over £1,500,000.

Following several financial disasters in the 1870s, the bank ceased trading in 1884. Although it was reformed as the New Oriental Bank Corporation, this too failed, and the bank finally closed its doors in 1892.

It is interesting to note that throughout its history the Bank had its head office in London and a sizeable branch in Edinburgh. The majority of its Court of Directors were Scottish, along with a great many of its senior overseas staff, and the very wording ‘Court of Directors’ is in itself terminology generally only used by Scottish banks.

Early Date
Starting in 1846, the Oriental Bank was the first bank to issue notes in Hong Kong, although no examples are thought to have survived. This note, dated 1860, is of a type that was issued between 1851 and 1865. Interestingly, it was issued in the same year that Kowloon was officially ceded to the British at the Convention of Peking, following the Second Opium War.

Until the discovery of this note, it has been unclear which of several known proof types were actually issued during this period. A few scattered proofs and specimens, printed by two separate printers, were all that were understood to have survived. The only other issued notes from the Oriental Bank Corporation to have survived are dated 1866 and 1879, three of which are in private collections, and several others in institutions.

Printing Company
This note was printed by Batho & Bingley, a relatively small London printer that operated from the early 1830’s through to the late 1850’s. All notes issued by the Oriental Bank (and the Oriental Bank Corporation) in Hong Kong from 1846 until 1865 were printed by Batho & Bingley, after which the contract was taken over by Perkins, Bacon & Co.

Batho & Bingley also printed notes for the Oriental Bank in Singapore, Ceylon, Australia, India and probably their other branches as well. As the bank gradually ran out of Batho & Bingley notes in each of these branches, all new printing contracts were instead awarded to Perkins, Bacon & Co. It is also interesting to note that a Batho & Bingley design for a Glasgow Bank note, produced in the mid 1840s, is almost identical to this note in all respects. This is another Scottish connection, and may explain why such an obscure printing company was chosen to provide notes for a major overseas bank.

Signatories
From the Hong Kong directories, annual lists of all foreign workers living in Hong Kong and China, it has been possible to work out who the two signatories are. John McDouall started working for the Oriental Bank Corporation in 1851. He worked for the bank until his untimely death in a carriage accident in 1873, by which time he had risen to the position of Bank Manager. He is listed in the Hong Kong Directory as a Manager from 1860 onwards, so this may have been one of the earliest notes he signed from this position. James Webster was an accountant for the Oriental Bank Corporation in 1860, though within 18 months he was promoted to the position of agent for the bank in the Shanghai branch. By the mid 1860s he appears to have left the Bank and moved to Yokohama to work for a trading company based there.

Clicking the 'CONFIRM DELETE NOTE' button below will permanently delete this note.