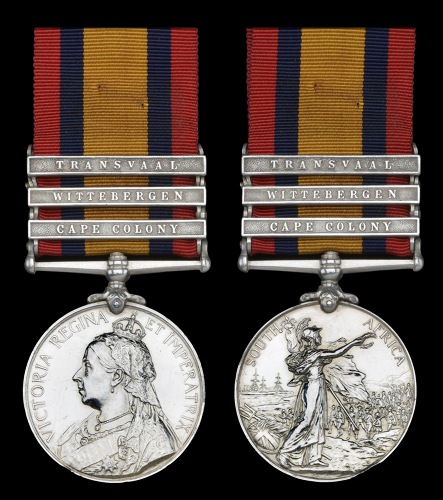 Edward Bailey (also listed as Bayley) was born in Oswestry, Shropshire, in 1872 and attested for the Imperial Yeomanry at Shrewsbury on 4 January 1900, whilst currently serving in the Shropshire Yeomanry Cavalry. He served with the 13th (Shropshire) Company, 5th Battalion Imperial Yeomanry in South Africa during the Boer War from 2 February 1900 to 28 January 1901, and was discharged on 19 March 1901, after 1 year and 75 days’ service.

The Wittebergen clasp is unique to the unit, and is confirmed on the recipient’s service papers (where it gives his medal entitlement as ‘South Africa, Wittebergen, Cape Colony’; the Transvaal clasp being unconfirmed). The likely explanation for this is that, as he came from Oswestry, he might have transferred whilst in South Africa to the Oswestry machine gun section, formed after the town of Oswestry purchased a maxim gun for use in South Africa at a cost of £600; both Bailey and the maxim gun arrived in South Africa at roughly the same time. There is also no mention on his service papers of him suffering from any wound or illness, and this further indicates that he was serving with a different unit to that mention on his medal, as his date of return to the U.K. does not tally with that of the 13th (Shropshire) Company, Imperial Yeomanry, whose 1st Contingent did not leave for home until 24 May 1901.