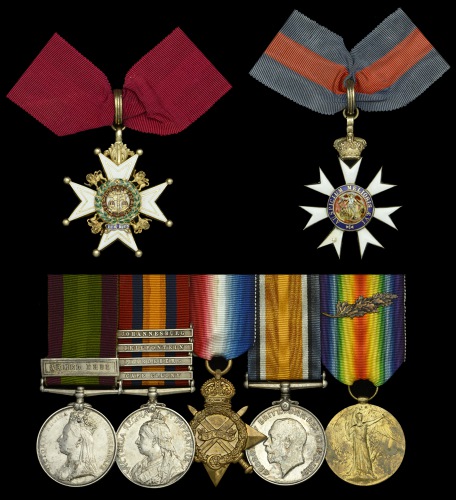 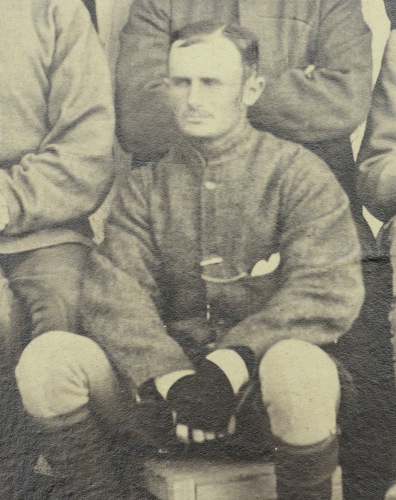 Henry Joseph Walker Jerome was born on 7 January 1855 in India, of half French and half Irish ancestry. His father was Major-General John Jerome of the 86th Foot. Jerome’s mother, a descendent of Sir Isaac Newton, was from the ancient Newton family of Shropshire. Brought to England at the age of five, he followed the family tradition and passed into Woolwich as a Gentleman Cadet in 1873 at the age of sixteen. He was commissioned Lieutenant in the Royal Engineers on 11 March 1874 and went out to India where he spent several years and served in the Afghan War (1878-80) for two years under Sir Donaldson Stewart being present at the actions of Ahmed Khel and Takht-i-Pul (medal with clasp).

Returning to England, Jerome was appointed Instructor of Fortifications at Chatham which post he occupied for two years, and then was placed in command of a Railway Company in England, and later Adjutant of the Volunteer Engineers at Glasgow. Having been advanced Captain in 1885 and Major in 1893, he went out to South Africa, following the outbreak of war, in command of the 9th Field Company R.E. and served with Lord Roberts at Paardeberg and was present at the capture of Cronje. He marched with Lord Roberts from Paardeberg to Pretoria and returned with home with the Field Marshall at the end of 1900, receiving promotion to Lieutenant-Colonel shortly afterwards. For his services during the Boer War he was mentioned in despatches, created a C.B., and awarded the Q.S.A. with 4 clasps.

Subsequently, for five years, Jerome was in command of the C.R.E.s at South Aldershot, receiving the Brevet of Colonel in 1904 and retiring in 1907 to Bilton Hall where he led the life of a gentleman farmer and enjoyed considerable success as a breeder and exhibitor of riding horses.

On the outbreak of the Great War, Colonel Jerome volunteered his services once more and for four months was engaged in purchasing remounts in the West Riding of Yorkshire. He embarked for France with the C.R.E. Division in January 1915 and served at Ypres, claiming to be one of the first Englishmen to experience poison gas - at Zonnebeke. After five months in France, when his Division came out of the trenches, he returned home and was subsequently mentioned in despatches and created a Companion of the Order of St. Michael and St. George. In June 1915, he was sent to Newark with Colonel Schreiber to start the Royal Engineers Depot and when the latter left, he was given command. He reached the age limit in 1917 and retired once more to his country home. The Colonel died in Hampshire in 1943.

Sold with the following:
12 good quality original photographs including a large group photograph of the R.E. and R.A. Gentleman Cadets (including the recipient) at Woolwich in 1872 with each individual named, a large good quality group portrait photograph of the nine Royal Engineers officers at Kandahar in 1879, each sitter named, including the recipient, large photograph of the British General and his Staff at Kandahar 1979, 2 group portrait photographs of the R.E. officers at Quetta, June 1884, each individual named; forwarding letter for the recipient’s C.B. King’s Sign Manual from Central Chancery of the Orders of Knighthood, dated 18 October 1904; letter written to the recipient from his wife Harriet Jerome, circa 1900; letter containing estimations as to the strength of the various British Army forces in South Africa, written circa 1899 to the recipient from his cousin Lucien Jerome on British Consulate-General, Havana headed paper; letters written by the recipient to his uncle, Major-General H. E. Jerome V.C., (2), the first sent from Camp Paardeberg on the Modder River, dated 2 March 1900 containing descriptions of actions and a sketch of the Paardeberg battlefield, the letter opens ‘My Dear Uncle Henry, Here we are bivouacked leading the toughest and hardest of lives, wild stormy cold wet weather alternating with very hot sunny days and blinding dust storms and some lively fighting thrown in, but we succeeded in capturing or helping to capture Mr Cronje and some 4000 of his followers’, the second letter sent from Pretoria, dated 8 July 1900, contains descriptions of incidents and actions on the subsequent march north to Pretoria.