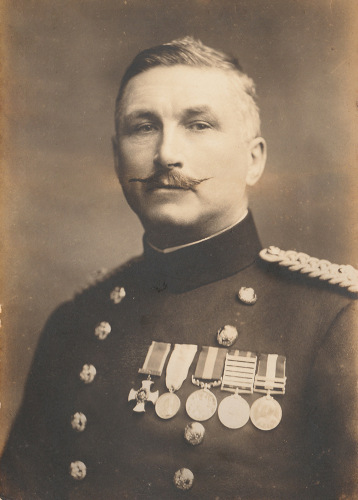 Richard Charles Frederick Holman was born in 1861 at Broadway, Dorset and was educated at King’s College, London. Having enlisted in the ranks of the British Army, he saw his first South African service in 1884 when he formed one of Lord Methuen’s corps of 800 picked volunteers which took part in the Bechuanaland expedition, rising to the rank of Sergeant. He left for Australia soon afterwards and served with the New South Wales Police Force, 1886-88 after which, having settled in Campbelltown, New South Wales, he was granted warrant officer rank in the New South Wales Permanent Mounted Infantry in 1890. In 1897, he spent several months in England on attachment to the 4th Dragoon Guards and 1st Battalion, Scots Guards and attended Queen Victoria’s Diamond Jubilee celebrations as a member of the New South Wales military detachment.
On 3 November 1899, he embarked for South Africa as Warrant Officer and Regimental Sergeant-Major of the 1st New South Wales Mounted Rifles and served with them during the campaign against the Boers, including service at the relief of Kimberley, the engagements at Paardeberg and Bloemfontein, the general advance with Lord Roberts to Kroonstadt, Johannesburg and Pretoria. He was mentioned in despatches and awarded the Distinguished Conduct Medal on Colonel de Lisle’s recommendation for persistent good work, especially at Diamond Hill on 12 June 1900, where he led a bayonet charge against Boer fortifications.

Returning to Sydney in January 1901, Holman was immediately offered and accepted the adjutancy of the 2nd Mounted Rifles under Lieutenant-Colonel Lassetter, with the rank of Lieutenant, embarking for South Africa once more in March 1901.
He spent the remainder of the war engaged in operations against Boer guerilla forces, including repeated raids on Boer Commandos and capturing several enemy convoys. In one year, the 2nd Mounted Rifles travelled over 4000 miles in every part of the Transvaal, and made more night marches than any other unit. For his services during this period he was again mentioned in despatches, promoted Captain in May 1901 by Lord Kitchener and awarded the Distinguished Service Order in August 1902.
He remained in the army after the end of the war, serving as Brigade Major with the 3rd Light Horse Brigade from December 1913 until September 1916 when he relinquished the post to take command of the Liverpool Concentration Camp, New South Wales with the rank of Lieutenant-Colonel. He carried out these duties until he retired on 4 February 1920 with the honorary rank of full Colonel. He died at Ingleburn in 1933.

Holman’s combination of D.S.O. and D.C.M. is believed to be one of only two awarded for a single campaign prior to the Great War, the other being Lieutenant S. E. Craig, of Loch’s Horse.