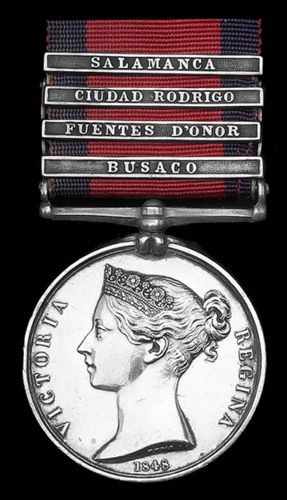 James Croal was born in Brechin, Forfar c.1778 Formerly employed as a Weaver, he entered the Army as a Private in the 6th Garrison Battalion in December 1806. He was promoted to Corporal in February 1807. He volunteered for the 24th Regiment on 30 June 1809 and served as a Serjeant with the 24th from 1 July 1809 until 30 September 1813. He was discharged as a consequence of an amputated right arm from a wound received at Burgos, 4 October 1812 (see below). Discharged at Chelmsford, aged 26 years. The officer commanding the depot, Captain J. C. Meacham (wounded at Busaco) wrote of him ‘... I have known him to have conducted himself as a good and excellent soldier and that I think him highly deserving of every mark of favour that can be bestowed on him.’ Croal was awarded a pension of 1/- per day (later increased to 1/3).

Latterly a Merchant and a Chelsea Pensioner, James Croal died on 4 June 1857 at Friockheim, Angus, aged 71 years and was buried in the New Cemetery, Friockheim.

The first assault of Burgos took place at nightfall on 19 September 1812. The Light Company of the 24th Foot were directed to attack the rear of the Horn Work but the attack was unsuccessful and the 24th lost five rank and file killed and sixteen wounded.

In the second attempt on the afternoon of 4 October, the 2nd Battalion 24th Foot, were marched into the trenches, where they were formed into two storming parties. One hundred and forty men were detailed for the assault on the main breach, led by Lieutenant Stephen Holmes, whilst the second party, comprising 58 men led by Lieutenant Fraser, were detailed to assault the breach expected to be made by the mine. The attack was to be delivered in daylight and many officers of other regiments managed to find their way to the hill to witness the assault, Wellington himself being present on San Miguel.

At 5 p.m. the signal for the explosion was given by Colonel Jones, the engineer in charge, afterwards the historian of Wellington’s sieges. He was hit in the act of giving the signal, but the mine went off and simultaneously the 24th dashed forward. The party who made for the new breach made by the mine, led by Lieutenant John Fraser, were there so soon that many were hit by falling stones, and all were covered by dust and fragments. This did not stop them, and before the surprised enemy could offer much resistance they were up and over the breach. Many defenders had been killed and directly Captain Lepper and the supports joined Lieutenant Fraser’s stormers the breach was secured and the attackers started to consolidate. The main body had a harder task: they had farther to go and here the defenders had not been shaken by the explosion. But, headed by Lieutenant Holmes, the 24th dashed forward and though received with a hot fire swarmed up the breach, where a savage struggle followed.

The 24th maintained themselves in the captured position until nightfall, when they were relieved. On reaching their camp they found it thronged with officers who had come to offer their congratulations. Carried out in full view of a large concourse, the storm had caught the imagination of the army and won the battalion great renown. The storm had cost the 24th twelve men killed, and two officers, Coote and Stack, and 56 men wounded. Wellington himself wrote warmly of the Twenty-Fourth, whose conduct he described to Lord Bathurst as ‘highly praisworthy’, while he wrote a special letter to the Duke of York to recommend to H.R.H.’s ‘favour and protection’ Captain Hedderwick and Lieutenants Holmes and Fraser, who had so greatly distinguished themselves.

With a quantity of copied research including copied service papers and roll extracts.