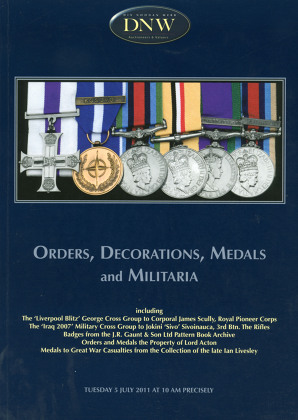 
Saleroom Notices
The following were amendments to the catalogue descriptions
Lot no.
31 There is no copy portrait sold with the medal
58 The recipient was promoted to Sergeant on 9 January 1858. Sold with research
90 The regimental number and initial is 2940 Pte. S. Rowe
169 A later (post-1992) issue medal is known to be extant named to this recipient
352 35th P.W.O. The Scinde Horse collar badge is hallmarked Birmingham 'W' possibly for 1946 not 1921; the 14th Punjab Regiment officer's side hat badge is hallmarked Birmingham 1927 not 1902; the Kachin Rifles item is hallmarked London 1922 not 1873
379 There is only one Limerick Night Constable female section waist belt clasp, total 4 pieces
547 Squadron-Leader Jones assumed the additional surname of Penderel in 1928. Between the Wars he took part in numerous air races including the King’s Cup races of 1924, 1925 and 1926, his skill being such that he was given a scratch handicap. Between January and March 1931 he commanded No 216 Squadron’s formation of three Vickers Victoria troop carriers on their 6,000 mile return flight from their base at Heliopolis, Cairo, to Cape Town, where he was welcomed by the Governor-General the Earl of Clarendon. For this flight he received the Air Force Cross from King George V in June 1931. Between 1932 and 1933 Penderel undertook a number of expeditions to explore Gulf Kebir and the desert interiors of Libya. One of his expeditions with Count Laszlo Almasy loosely formed the basis for The English Patient. He gave a lecture on his expeditions to the Royal Geographical Society in January 1934 and was admitted as a fellow of the society, as FRGS. He was promoted to Group Captain in 1938 and in September 1939 became the first commander of No 201 Group RAF. He was killed on 14 May 1943 whilst on a secret trial flight piloting Hurricane HV895 from RAF Middle Wallop over the Sudbourne battle training area when he crashed at Orford Ness.
665 The entries in this log book do not have squadron counterstamps and it may therefore be a personal record book kept simultaneously by the recipient


The following lots were withdrawn before the auction:
508 and 636 Return to Auction Information