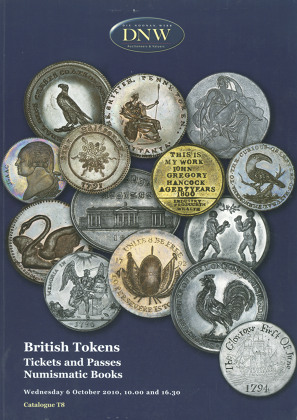 
Saleroom Notices
The following were amendments to the catalogue descriptions
Lot no.
﻿﻿﻿﻿365 Provenance: R.C. Bell Collection, DNW Auction 26, 1 October 1996, lot 76 (part); bt A. Davisson December 1996
570-1 These were ordered by the London Corresponding Society and engraved by Florimond Goddard, a clock and watch maker of 8 Rathbone place. Twelve silver versions were initially ordered (27 February 1794) for presentation to the jurymen concerned in Eaton's trial but two additional ones were added on 17 March 1794 for the two defence counsel (John Gurney and Felix Vaughan), although too late for their names to be included on the reverse. Fourteen silver versions were therefore finally struck. The medals were about to be issued to the recipients but were impounded by the authorities when Thomas Hardy, the founder and secretary of the Society, was arrested on 12 May 1794. Although dated 14 March 1794 it was not until July 1795 that they were returned to the Society and could be distributed to the recipients. According to the record copper and white metal versions of the medal (the latter for sale to members of the Society at 6d. each) were apparently also produced but I have found no mention of any gilt version (Information courtesy of David Dykes)
652 16 pieces in the lot, as described
698 The lot also includes an extra J.W. token, 7850: 17 in the lot
894 The first sentence in the footnote should be disregarded
977 There is no ‘unidentified token’ in the lot; the total of 15 in the lot is correct

The following lots were withdrawn before the auction:
None Return to Auction Information