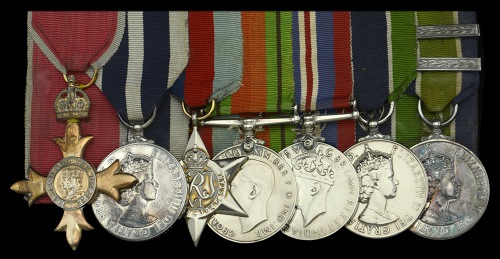 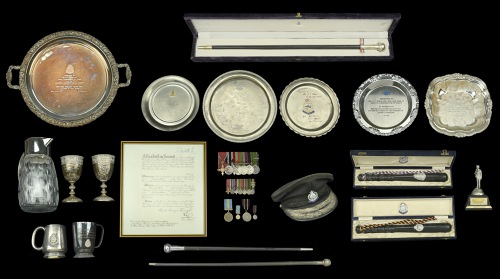 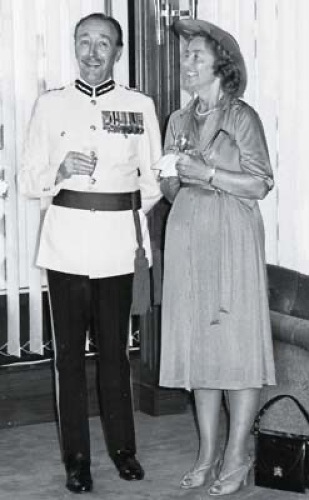 A post-War O.B.E. group of seven, together with a large number of presentation items, awarded to Deputy Commissioner of Police Mr. P. T. Moor, Royal Hong Kong Police, late Royal Air Force, who over the course of a 34 year career served in all the major branches of the Force, and in all four regions

Peter Thomas Moor was born in Jarrow-on-Tyne on on 3 January 1926, and having moved with his family to Staines, upon leaving school joined a firm of insurance brokers as an assistant account. He joined the Royal Air Force in 1943, and after training initially as a pilot-navigator and bomb aimer, he then went through further training, this time as a wireless operator, before being posted to India where he was stationed in Bombay, Delhi, Karachi, Calcutta, and then Bhopal at an R.A.F. radio base. He left the Royal Air Force in 1947 and, because of his radio training, joined the British Post Office for two years as a telecommunications engineer.

Arriving in Hong Kong as a probationary Sub-Inspector of police in August 1949, over the next 34 years Moor served in all the major branches of the Force, including Uniform Branch, ClD, Special Branch, Traffic and Marine, as well as serving in all four regions (Hong Kong lsland, Kowloon, the New Territories, and Marine).

During his time with the Force, Moor had been the Recruiting Officer for the Hong Kong Government in Pakistan in 1961, and seconded to the Ministry of Overseas Development as Deputy Director of Overseas Police Courses at Hendon for two years from 1963. He was also the Recruiting Officer in Canada in 1973. He was the only officer to command the Auxiliary Police for two separate periods, and was Principal Staff Officer at the Auxiliary Police Headquarters during the 1967 disturbances.

Moor commanded Kowloon Police District from 1975 to 1978, and was also chairman of the Hong Kong International Airport Security committee, as well as heading delegations to Thailand, the Philippines, and Australia. He also visited Zambia with General Fursdon from the Ministry of Defence to evaluate the Zambian requirements in regard to their Police Para-military Forces and the re-organisation of the Zambian Police Force.

Retiring in 1983 to West Sussex, he took an interest in local affairs, being a County Councillor from 1997 to 2009, and serving as Vice-Chairman of West Sussex County Council from 2005 to 2009. He also held various charitable appointments, and was President of the Royal Hong Kong Police Association up until his death. He died on 15 June 2012, aged 86.

Sold with the Bestowal Document for the O.B.E., this mounted in a glazed display frame; the recipient’s Royal Hong Kong Police cap; and the following presentation items:

i) A large Silver Presentation Salver, inscribed ‘Presented to Mr. P. T. Moor, J.P., Senior Superintendent of Police, by the Gazetted and Inspectorate Officers of the Hong Kong Auxiliary Police Force as a mark of their esteem, Hong Kong, 1st December 1967’

ii) Silver-plated Presentation Bowl, inscribed ‘Presented to Mr. P. T. Moor, O.B.E., Q.P.M., C.P.M., F.B.I.M., J.P., Deputy Commissioner of Police, by the Officers of the Royal Hong Kong Auxiliary Police Force on the occasion of his being awarded the Order of the British Empire by Her Majesty the Queen 1981’

iv) Presentation Salver, inscribed ‘Presented by the Gazetted Officers of the Crime Wing to Mr. P. T. Moor, O.B.E., Q.P.M., C.P.M., F.B.I.M., J.P., Deputy Commissioner of Police, Operations, on his Retirement from the Royal Hong Kong Police 1983’ and engraved with the subscribers’ signatures

viii) A pair of identical Presentation Goblets, both inscribed ‘Presented by the Staff of Police Training School 20th April 1974’

ix) Presentation Tankard, inscribed ‘Presented to Mr. P. T. Moor, D.S. S.S.P. on his departure from the Colony by the Officers of S.S.P. Division’

Please note that this lot is not suitable for shipping, but can be hand delivered within mainland Britain by prior arrangement with Christopher Mellor-Hill.