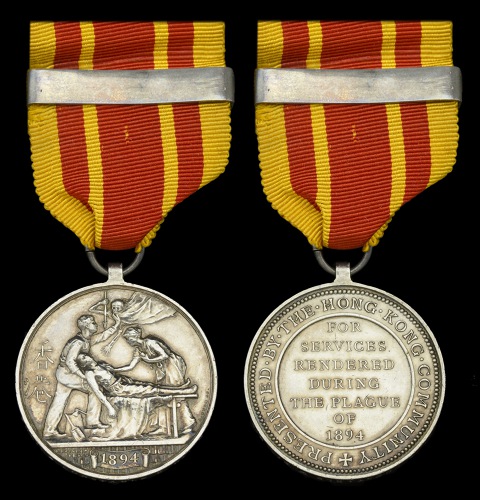 Approximately 35 Hong Kong Plague medals are thought to have been awarded to the Inspectors, Sergeants and Constables of the Hong Kong Police, for their assistance during the outbreak of bubonic plague which broke out in the colony on 5 May 1894.

The role of the Police Force, and of Constable Ritchie in particular, was described in the report of the Permanent Committee of the Sanitary Board, dated 24th September 1894:

‘... the Permanent Committee desires to call to the special attention of the Government the very valuable services rendered by certain members of the Police Force who volunteered for work under the Sanitary Board during the plague, and who have performed that work in a manner deserving of every commendation... The Sanitary Board staff was wholly inadequate for the work before it and, but for the assistance rendered by the Police, assistance they were under no obligation whatever to tender, and which did not come in any way within the scope of their duties as constables, it is difficult to see from what quarter the board could have obtained men of sufficient knowledge and experience to carry out the house to house visitations, the removal of the dead and dying, the coffining of the dead, and the other detail work... that had to be in the hands of men who were available for duty at any time of the day and night and under discipline...

... Sergeant Phelps and Constable Collett were in the performance of very dangerous and very disgusting work at the Tung Wah, Glass House and Cattle Depot Hospitals, and but for their services it would not have been possible during the earlier stages of the epidemic to have got the dead coffined, to have the coffins filled with quick lime and the bodies removed in time. Contables... Ritchie... rendered similar service at the Tung Wah.’

The Tung Wah Hospital was a charitable organisation operated by and for the Chinese, and was situated in the Western District, not far from Tai Ping Shan. After being packed with quick lime, coffins were taken to the wharf at Lap San Wan, and then conveyed by sea to Sandy Bay for burial.

By the end of July the number of new cases began to fall, and in September the Colony was declared plague-free. Some 2,500 had died of the plague and nearly half the Chinese population had fled back to the mainland. At least seven members of the Police Force were among the dead.

In September 1894 the Permanent Committee of the Sanitary Board produced the report recognising the contribution of certain individuals and organisations in combating the plague. In the same month the European community organised a public meeting to discuss recognition of those who had distinguished themselves and, amongst other things, it was agreed to award medals in gold or silver.

Constable Ritchie was amongst the officers and men who were publicly thanked for services rendered during the plague by Governor Robinson and Mr Ackroyd, the Acting Chief Justice, at a parade at Central Police Station held on 21 March 1895, and reported in the Hong Kong Daily Press on the following day. He was one of 35 officers who “rendered most valuable and efficient services and these will receive medals...” At the same ceremony an inscribed silver shield about two feet square, mounted on blackwood, was presented to the force. This shield disappeared during the Japanese occupation.