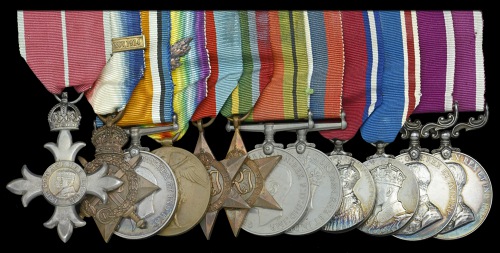 A Second War M.B.E. group of twelve awarded to Major (Quartermaster) R. T. Guscott, Middlesex Regiment, who was awarded the Meritorious Service Medal during the Great War, and was taken Prisoner of War following the fall of Hong Kong, 25 December 1941

Robert Thomas ‘Bob’ Guscott ‘was born on 10 November 1888 and enlisted into the Middlesex Regiment on his 18th birthday in 1906. He served with the 2nd Battalion at home until 1913 and then went to Malta when the Battalion started out on its overseas tour. This was cut short when war broke out in 1914, and the Battalion joined the B.E.F. in France in November of that year. By that time he had risen to the rank of Colour-Sergeant. He remained continuously on active service with he 2nd Battalion until Armistice Day 1918. For his services he was Mentioned in Despatches in January 1917 [London Gazette 14 January 1917] and was awarded the Meritorious Service Medal in 1919.

Guscott rejoined the 2nd Battalion after the war and, in August 1919, he went to Egypt when the Battalion continued its overseas tour, which had been interrupted in 1914. He was posted for a tour of duty at the Depot in 1921, and in 1923 he became Regimental Sergeant Major at the Royal Military School of Music, Kneller Hall. There he remained until 1930.

On 22 January 1930 Guscott was appointed to a commission as Lieutenant (Quartermaster) and in March of that year he was posted to the 2nd Battalion, then stationed at Madras. He returned to this country with the Battalion on completion of its overseas tour in the Sudan in December 1931 and remained with it until, in 1935, he was posted to the Depot.

In October 1937 Guscott was posted to the 1st Battalion in Hong Kong and as soon as war was imminent in 1939 he began the hard task of equipping the unit to War Scale. The results were so efficient that he was recommended for, and awarded the M.B.E. Publication was made on 1 January 1942, and that same month he was promoted to the rank of Major (Quartermaster). He did not learn of the award until after the end of the War, for after the capture of the Colony by the Japanese in December 1941, he was reported missing. Nine months later news filtered through that he was prisoner of war. He was repatriated on 21 November 1945, and retired on 29 December 1946, going to live at Bexhill-on-Sea, Sussex. He died on 8 February 1964.’ (The recipient’s obituary, published in The Die Hards, refers).